Darkly perverse family traps their children and us 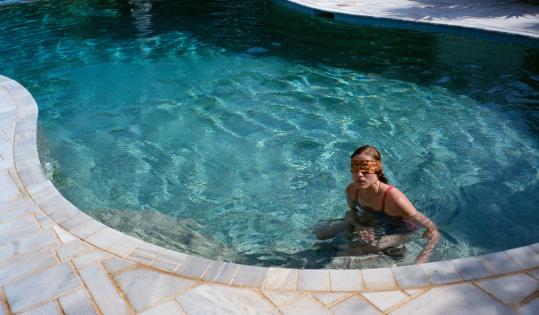 ‘In a month, your mother will be giving birth to two children and one dog,’’ drones the father to his children in “Dogtooth.’’ They return his announcement with a kind of neutered joy. This is mildly amusing, scarcely accurate news, sandwiched among scenes of incest, miseducation, and inhumanity that would shatter the SPCA’s heart. The cat looked innocent to me, but nothing in this weird, watchable, blasé black comedy from Greece stays innocent for long.

Our introduction includes a trio of adultish siblings (Aggeliki Papoulia, Mary Tsoni, and Hristos Passalis) sitting around the family home listening to a recording that asserts that the word “sea’’ means “leather chair’’ and that an “excursion’’ is a strong flooring material. We never get an age for these three, but they look old enough to know that their legs are being pulled. In the next scene we meet their father, Christos Stergioglou. He’s driving a blindfolded security guard (Anna Kalaitzidou) to the house for her latest hired assignation with his son. In 10 minutes, we know this man has spent most of his paternity pulling legs.

What follows is more of the same — outdoor horseplay and indoor exploration, while dad sits in his manager’s office at a plant of some kind, and returns home to further warp his children. He tells them a cat is their enemy, has them get down on all fours and bark like dogs. It all comes naturally to them, even mom (Michelle Valley), who appears to be just as committed to questionable parenting as her husband.

“Dogtooth’’ doesn’t explain itself. We glean that an event occurred long ago that trapped this family in its current macabre state. We learn that the security guard works at the father’s factory. Part of what sustains any summoned interest is the escalating mystery and sincere admiration for the air of perversity that the director and co-writer, Yorgos Lanthimos, maintains. His movie gleefully pursues the redefinition of normal. The parents’ experiment on their children extends to Lanthimos’s experiment with us.

The film’s casual, cruel approach to humor, its unadulterated though not unstylized approach, and its relatively isolated setting (only father leaves the property) recall the sardonic mordancy of Dogme 95. “Dogtooth’’ is slightly less self-congratulatory than the average Dogme movie, a few of which belong to Lars von Trier. This feels, instead, more like an extreme summer at a Dadaist acting camp.

An over-familiarity with Dogme and other European moviemaking in the last 15 years would suggest you prepare for that minor escalation to culminate in the worst (the movie won the Camera d’Or at Cannes last year). I considered giving up once one of the sisters opens a medical textbook and proceeds to anesthetize herself. When the anticipated surgery fails to ensue, I found it somewhat easier to withstand, say, the shock beating of one woman with a VHS tape and another with a whole VCR. I had even been disarmed enough to watch both scenes and think: Is this all that that technology is good for now?

Lanthimos works in an enveloping clinical vein. But the central mystery with “Dogtooth’’ as both an experiment and a movie becomes hard to ignore: How has it taken this long for these people to implode? Of course, I’m looking for logic where none exists. This is a family that’s been led to believe Frank Sinatra is grandpa. You don’t know why Lanthimos bothers playing “Fly Me to the Moon,’’ since, clearly, these people are already there.

Written by: Lanthimos and Efthymus Filippou

In Greek, with subtitles

Unrated (some language, sex between siblings, and a very murdered cat)