Memoir probes a family’s secrets: A road not taken haunts ‘Phyllis and Harold’ 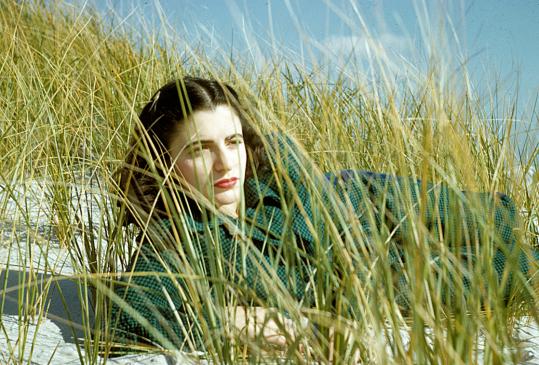 Phyllis Kleine, lying in the grass circa 1943, is the mystery figure in her daughter’s movie. (Kleine Family/Rainbow Releasing)
By Wesley Morris Globe Staff / July 23, 2010

Cindy Kleine’s documentary about her parents is called “Phyllis and Harold,’’ but ultimately it’s about Phyllis. How for years she kept secrets from Harold, how she was a kind of reluctant mother, how she enlisted her elder daughter — Kleine’s sister, Ricky — to maintain those secrets. The film isn’t a take-down. It’s a fascinating plea, on Kleine’s part, to make sense of the many cul-de-sacs and hidden passageways in her mother’s life. She doesn’t succeed, but you have the distinct feeling that she couldn’t have.

The Phyllis captured confessing, reminiscing, and weeping is not a bad woman. She was simply, well, married. She remained so for 59 years to a man who, from the looks of it, was unsure of how complex his wife’s emotional labyrinth had become over the decades.

Harold and Phyllis married in the 1950s, an era that emcompasses a swelling trove of postwar marriage documentaries (“51 Birch Street,’’ “Capturing the Friedmans,’’ “Crazy Love’’) often made by the children. In Kleine’s film, the gender roles back then were clear: Harold worked, Phyllis domesticated. They settled in the new Long Island suburbs. His dental practice and real estate ventures took off. The family grew. Phyllis was a stylish woman. She made her own clothes, and home movie footage and old photographs reveal a beauty meant for more urban climes (she’s early Anne Bancroft aging into Ruth Bader Ginsburg; young Harold was handsome and virile-looking).

It wouldn’t be a reach to watch Phyllis and think of Mrs. Don Draper, on “Mad Men,’’ discovering that her housewife assignment is an early coffin. In a different time or with a different man, Phyllis might have been Coco Chanel or Gloria Vanderbilt. The Kleines had great parties. Decades later, Harold sits before his daughter’s camera and says, essentially, that things were pretty good. But there’s permanent unhappiness in his face and concealment in his voice. It’s not simply that you don’t believe him. He doesn’t appear to believe himself.

It’s not entirely clear what Harold knew of Phyllis’s misery. How aware was he that she spent their marriage achingly in love with another man? Did he know that his daughters were complicit in some of her deceptions? Kleine says, in one of too many conversations with the camera, that she wanted to find out after all these years why her parents were ever together. The film provides her mother with an opportunity to unburden herself, but Harold appears to spend the rest of his days in the dark.

This is not a work of investigation or confrontation. Instead, “Phyllis and Harold’’ suffers from being earnest in a way that bespeaks years of some kind of therapy. I imagine that would be the only way to prepare to make a movie like this. But that tone bears modest fruit. Kleine has worked out much of this for herself already. Could she have been too emotionally healthy to ask her parents the tough questions on camera and tell them the hard truths? Or more understandably: Could she simply have been too terrified?

Either way, Kleine’s confessional insertions and the reenactment of her own dreams and memories, presented as a series of crudely animated photographs, suggest naively jejune reversion: Cindy, when it comes to our parents, we’re all merely children. It’s Ricky whose anger, guilt, and confusion still feels raw and unprocessed. Her childhood memories also diverge from her sister’s. But, again, “Phyllis and Harold’’ is really about Phyllis and how discontent has a way of spilling, then spreading. Kleine never quite says so, but her mother’s life was a tragedy.