A mind ahead of its time: An early scholar’s quest for enlightenment runs into a clash of cultures in ‘Agora’ 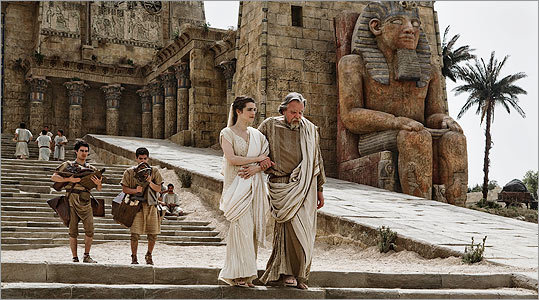 "Agora’’ represents a genre of movie so increasingly rare — the historical epic of ideas, like “Spartacus’’ or “A Man for All Seasons’’ — that you wish this one were better than it is. It’s still more than watchable thanks to the ministrations of a talented director, Spain’s Alejandro Amenábar, but the togas seem to have brought out the stiff, declamatory earnestness in everyone. High-minded melodrama is never an easy combination to pull off, and this film’s nobler urges — Amenábar wants nothing less than to illustrate the defeat of classical antiquity by early Christianity — struggle with the desire to give us a ripsnorting show.

At the very least, “Agora’’ finally gives Rachel Weisz a role that almost exactly matches her intense, humorless, but undeniable star charisma: Hypatia, the legendary mathematician-scholar of fifth-century Alexandria. Before her death in 415 CE at the hands of a Christian mob, Hypatia cut a unique figure in imperial Roman culture, teaching philosophy to a generation of civic and religious leaders, exploring the effects of gravity, and charting the movements of the spheres. Part of the pleasurable suspense of the film is watching the character feel her way across the years toward a breakthrough understanding of our planetary system: elliptical orbits wheeling around a sun.

There’s no historical proof that the real Hypatia discovered any such thing, but that doesn’t stop the movie from making the leap. (There’s also evidence that she was quite a bit older, but Weisz is here to bring both steeliness and sex appeal to the part. Perhaps Helen Mirren might have served the same purpose? But I digress.) Anyway, the blissful science of “Agora’’ threatens to get lost amid the grindings of men and history and the film’s depiction of culture crushed time and again by religious intolerance.

In the first part of the film, Egyptian paganism (indulged by Rome) holds sway over Alexandria, while Christians are the reviled minority; the story builds to a lavishly filmed uprising in which the city’s famous library is sacked and Hypatia’s students scatter, including the upper-class Christian Synesius (Rupert Evans), the spoiled Roman nobleman Orestes (Oscar Isaac), and the scholar’s brilliant but lovestruck slave Davus (Max Minghella). Actually, all of them are hot for teacher, but Weisz’s Hypatia occupies a higher plane of existence. Not so much fun, but at least that apparently is true to history.

Fifteen years later, the Christians hold the upper hand in Alexandria and, under the paranoid urgings of Cyril the (Sami Samir), decide to have at the Jews. Fanaticism, no matter who’s doing the preaching, is this movie’s gravest sin, against which the enlightenment of science and learning has always struggled and always will. The climactic sequences put the characters through the wringer of impossible choices — most of which involve protecting their mentor Hypatia or delivering her to the hounds — and deposit us at the doorstep of the Dark Ages.

Dramatic stakes this momentous tend to bring out the ham in an actor, and “Agora’’ verges on the silly more often than it should. Minghella’s character barely makes sense — he’s a cultivated slave turned Christian thug who carries a torch for his mistress across the decades — and the breathlessness with which the movie wheels from one civic crisis to the next becomes hectic and strained.

Amenábar’s earlier movies — the spooky Nicole Kidman ghost story “The Others,’’ “The Sea Inside’’ with Javier Bardem as a fiercely suicidal paraplegic — are the opposite of historical; instead, they’re small and controlled and obsessive. Weisz is a natural for this territory, and the cool mania in Hypatia’s eyes as she caresses her astrolabe is a road “Agora’’ sadly doesn’t pursue. You want more time with this beautiful mind and fewer speeches and clashing swords. The movie could yet turn an inquisitive young viewer onto history and it’s a natural if you have any tough-minded daughters at home. But the least interesting thing a filmmaker could do with this character is focus on her martyrdom, even when history insists it’s so.

Written by: Amenábar and Mateo Gil