Not much spark in the magic: Cage’s energy can’t save ‘Apprentice’ 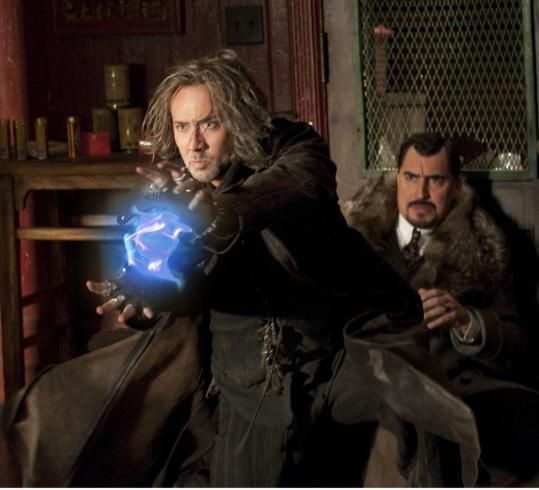 There’s no magic to speak of in “The Sorcerer’s Apprentice.’’ I mean, there’s the stuff that happens when an effects crew works to provide the impression of magic. At least once, Nicolas Cage waves his arms and Alfred Molina goes flying across a bathroom (why do so many action sequences involve urinals?), and the Merrill Lynch bull statue stampedes around Wall Street. (Hey, who said “Jumanji’’?)

But a movie in which spells are cast is not the same as a movie that casts a spell. To be fair, the sight of Monica Bellucci swaying and chanting mumbo jumbo on a fountain near Battery Park is a little hypnotic. What’s she doing here? What, really, is this movie doing here? “The Sorcerer’s Apprentice ’’ is a flavorless family-friendly action-adventure that doubles as memory exploitation. It has nothing to do with either the Mickey Mouse broom sequence of the same name from 1940’s “Fantasia’’ or the 213-year-old Goethe poem that inspired it.

“Fantasia ’’ and “The Sorcerer’s Apprentice ’’ both belong to , which tries to justify the latter movie by tossing in a quick homage to the former. This time the broom sequence stars a bunch of mops. It feels cynical, despite being the only interesting thing in the movie. The three credited screenwriters — Matt Lopez, Doug Miro, and Carlo Bernard — plunder Arthurian legend for the rest of the story.

Balthazar (Cage) fights to save mankind (or Manhattan) from Horvath (Molina), who wants to destroy it. Apparently, they’ve been at this for centuries, ever since their days as Merlin’s underlings. A coup against Merlin left Balthazar’s lady, Veronica (Bellucci), trapped in an extra-strength nesting doll called the grimhold, sharing a body with Morgana le Fay (Alice Krige). Veronica’s liberation depends on the discovery of an enchanted being called the Prime Merlinian, presumably because the Last Airbender was taken. If freed, Morgana plans to gather an evil army to destroy the world. Her frivolous plans to raise the dead around the area of ground zero is almost beyond the pale.

In any case, Balthazar’s millennium-long search turns up a prime candidate in an NYU physics nerd named Dave (Jay Baruchel). The movie turns into a training-session picture that the makers of the current, more entertaining “Karate Kid’’ wouldn’t be wrong to find actionable: They copied first. “The Sorcerer’s Apprentice’’ does have its own licks of inspiration. Balthazar rides one of the Chrysler Building eagles, and Dave seems momentarily curious about the intersection of science and magic. But the movie is essentially just a series of generic magic fights and car chases interrupted by Dave’s improbable pursuit of a blond classmate (Teresa Palmer) who hosts a wimp-rock radio show and fulfills casting-call requirements for Kristen Stewart’s sullenness with Zooey Deschanel’s whatever. This is romantic-comic ground better left to CBS’s “The Big Bang Theory.’’

“The Sorcerer’s Apprentice’’ is less than the shows, movies, and products it seems like. At some point, the hunt for that nesting doll and the demolition of its contents foretells a video game (it arrives in stores today) and might induce longing in some for the Idiots Guide to American History found in those “National Treasure’’ movies.

They were made by the same people responsible for this one — the director Jon Turteltaub, the producer Jerry Bruckheimer, and, of course, Cage, who almost makes the movie worth enduring. He plays the part with just enough characteristic slightly crazed vigor that you keep waiting to discover that he’s just an escapee from the Disney mental ward. The outfit alone suggests dubious mental health. He wears a wig of blond curls and a leather duster. To my eyes, he looked like he’d just won the lead in “The Nickelback Story.’’ But for the kids who cheered in the audience, Cage was a happier sight. He probably seemed like a substitute teacher from Hogwarts.