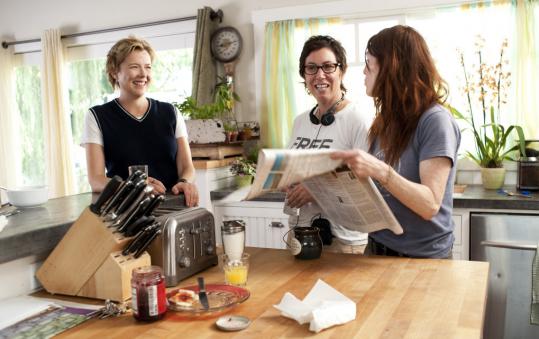 Last month, final arguments were heard in US District Court in San Francisco over the legality of Proposition 8, the California ballot initiative forbidding same-sex marriages that passed in November 2008. This Friday, visitors to local movie theaters are offered a glimpse of Prop 8 supporters’ worst nightmares: a committed lesbian couple with two children, conceived with the help of a sperm donor.

The film, “The Kids Are All Right,’’ which sparked a bidding war at this year’s Sundance Film Festival, offers the comforting news, for moviegoers of all political and sexual persuasions, that its family seems no more or less dysfunctional than any other. In fact, it is the film’s fraught sense of intimacy, and the perverse pleasure it takes in the discomfort of bickering couple Jules (Julianne Moore) and Nic (Annette Bening), and their children, Joni (Mia Wasikowska) and Laser (Josh Hutcherson), that renders it so intensely familiar. “The Kids Are All Right’’ isn’t about a gay family; it’s about all families.

“I think the timing’s really interesting. It certainly wasn’t calculated to be opening while the court is deliberating on Prop 8. That’s uncanny,’’ says director Lisa Cholodenko. “Our intention wasn’t overtly political. The subversion, as we saw it, was to be nonpolitical, and just to make this human story that was about a family that people could relate to, no matter what your identity or your sexual preferences were.’’

The director of “High Art’’ (1998) and “Laurel Canyon’’ (2002), two other studies of impromptu families and the creeping pull of conventionality, developed “The Kids Are All Right’’ in tandem with screenwriter Stuart Blumberg (“Keeping the Faith’’). It was Cholodenko’s first time working with another writer, and she used Blumberg as an all-purpose sounding board and reality check. “We were both raised, value-wise, upper-middle-class Jewish kids, and that brings with it a certain orientation to family,’’ says Cholodenko. “I think a lot about how I’ve been shaped by my family. One of the things I see as a recurring idea in these films is that tension between going your own way, being a rule-breaker, and the desire for a more conventional path.’’

Cholodenko, 46, was born in Los Angeles and studied film at San Francisco State University, where she encountered a community of avant-garde-friendly students and professors. “It was the first time it occurred to me that real people make films. It had always seemed like mythic people, from black-and-white pictures. I didn’t realize there was a connection between us and them.’’

After graduating, she landed a job as an assistant editor on the groundbreaking 1991 film “Boyz N the Hood’’, where she was inspired by the example of wunderkind director John Singleton. “That a young person could actually tell a story that was really personal and pressing to them about their world, and this could happen, was a very seminal thing for me,’’ she says. Inspired by the example of filmmakers like Jane Campion and Gus Van Sant, who could skirt the boundary between the commercial and the experimental, Cholodenko enrolled in Columbia University’s master’s program in cinema studies, determined to direct.

Both “High Art’’ and “Laurel Canyon’’ are about the belated discovery of the rich, messy, dangerous world of art, and the emotional fallout from the collision of innocence and experience. “The Kids Are All Right’’ bypasses the art, but stocks up on the emotional fallout.

The summer before she begins college, Joni and her younger brother track down Paul (Mark Ruffalo), their biological father, and his sudden presence in their lives jars loose much of the unexamined tension of their hitherto-placid family. With his motorcycle and casual swagger, Paul is the epitome of the mysterious outsider “the high plains drifter,’’ as Cholodenko describes him. Paul is exciting, and liberating, but is he family?

The film plays out as a comedic inversion of Pier Paolo Pasolini’s scandalous “Teorema,’’ with Terence Stamp as the stranger seducing each member of a bourgeois family individually. Paul’s seduction is (mostly) chaste, but the repercussions of his sudden arrival are equally volcanic. Parents are pitted against children, brothers against sisters, lovers against lovers, each testing the boundary where their selves end and family begins.

For Cholodenko, who is lesbian and raising a child with her partner in Los Angeles, there are undoubtedly autobiographical elements of the film (in her mannerisms and tone of voice, Bening is practically channeling the director), but the point is transcending the particularity of her film’s world in search of something universal.

Cholodenko had offered Moore her pick of the two starring roles after completing an early draft (“I had a feeling she’d pick that role’’), but did not come to Bening until pre-production. “Certainly when I thought about Annette, closer to when we offered it to her, I felt like she was going to bring this kind of humor to it. She’s so funny, and wry, and goes between comedy and drama really easily.’’

That knife’s edge between comedy and drama is the place where “The Kids Are All Right’’ rests, although even the actors were initially in need of reassurance from the director: “ ‘You are intending for this to have comedic energy, right?’ ’’ Cholodenko remembers some of them wondering after reading the script.

For the director, it is precisely those moments of awkward uneasiness — is this supposed to be funny? — that are the most telling: “I think it addresses people’s vulnerabilities, and their sensitivities, and the parts of themselves that are really human, in that discomfort.’’

No one comes off entirely well in “The Kids Are All Right’’; narcissism, self-absorption, and self-pity are seemingly endemic in the film’s bohemian Los Angeles surroundings, but there are no genuine villains, either. “I felt like I wanted to keep a sympathy for all these characters going,’’ says Cholodenko. “I wanted to make sure that in each indiscretion or whatever was happening, that there was a kind of conscience that they had.’’