From boy to man, the face has seen lots of changes 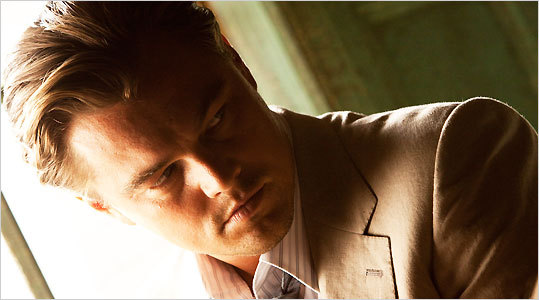 A prediction: “Inception,’’ which opens Friday, will be the biggest live-action movie of the summer. It would be the biggest movie, period, if not for “Toy Story 3’’ (never underestimate the power of Pixar).

What’s strange about all the “Inception’’ anticipation is that it has so little to do with star power. It owes almost everything to advance word and the fact that this is the first movie writer-director Christopher Nolan, speaking of biggest movies, has done since “The Dark Knight.’’

It’s not as if “Inception’’ has a cast of unknowns. Ellen Page and Marion Cotillard are the female leads, and Leonardo DiCaprio is top-billed. He’s a very big name indeed, having been on a first-name basis with headline writers — “Leo’’! — at least since “Romeo + Juliet’’ (1996). But he’s basically incidental to all the “Inception’’ excitement. In a way, that’s a tribute to DiCaprio. You don’t know what to expect from him onscreen — unlike George Clooney, say, or Brad Pitt. More than a dozen years after “Titanic’’ (1997) made him king of the world, he remains a star in search of a persona.

Every moviegoer recognizes the DiCaprio name (how could they not, with all those vowels) and can tell you a lot about him. That’s one working definition of superstardom. People know he’s a good-looking guy (though as he’s bulked up and his face has squared off, he’s not the heartbreaker he once was). He’s a Lakers fan. He has a penchant for supermodels. He’s big on the environment. He’s who Robert De Niro used to be for Martin Scorsese. Beyond that, he’s . . . well, kind of a blank. In fact, blankness may be the closest thing DiCaprio has to a distinguishing feature onscreen. Is there a more recessive post-Method superstar?

Maybe the best way to understand DiCaprio is through the phases of his career. Even though he’s only 35, there have been at least four of them. For an actor with just two dozen features in his filmography, that’s a lot.

Teen angel
That annoying sound being heard across the nation in the mid-’90s came from miles of Scotch tape being torn in teenage girls’ bedrooms as DiCaprio posters went up on their walls. After getting his start on television (“Parenthood,’’ “Growing Pains’’), he made an immediate impression in “This Boy’s Life’’ and got a best supporting actor nomination for “What’s Eating Gilbert Grape’’ (both 1993).

DiCaprio looked younger than his years and was strikingly attractive: part faun, part boy next door. How attractive was he? In “The Quick and the Dead’’ (1995), he’s prettier than Sharon Stone, hands down. Yet he refused to follow the path of boy-toy least resistance. He played the poet Rimbaud (“Total Eclipse’’) and junkie-hoopster Jim Carroll (“The Basketball Diaries,’’ both 1995). Clearly, something interesting was developing here. DiCaprio was using his looks, as all actors do (it’s just that few have had looks to match his), without letting his looks use him.

King of the world
Make no mistake. DiCaprio was a very big reason (maybe the biggest) “Titanic’’ became the top-grossing movie of all time. If you doubt that, ask yourself how much Sam Worthington contributed to “Avatar’’ overtaking “Titanic.’’ Millions of teenage girls went to see “Titanic’’ multiple times because of DiCaprio’s Jack Dawson. And the out-of-left-field success of “Romeo + Juliet’’ the year before had a lot to do with setting the stage (floating the boat?) for DiCaprio in “Titanic.’’ There’s a connection between those two movies and DiCaprio’s place in them, not unlike that between “East of Eden’’ and “Rebel Without a Cause’’ and James Dean.
Beached
So you star in this unprecedented smash. What do you do, become Mark Hamill or Harrison Ford? Do you even care? If you’re Leo, you make a few movies that go nowhere (“Celebrity,’’ 1998; “The Beach,’’ 2000; “Don’s Plum,’’ 2001). You go to the White House for ABC to interview President Clinton about the environment. People start to make fun of you.

Notice, though, that Woody Allen directed “Celebrity’’ and Danny Boyle “The Beach.’’ One of the most impressive things about DiCaprio has been his consistently seeking out challenging costars and interesting directors to work with.

Martian chronicles
It’s almost too right. How does DiCaprio establish himself as a film actor? Playing De Niro’s stepson. A decade later, he takes on the role in Scorsese’s work that De Niro once had. It must be said that that role doesn’t seem to suit DiCaprio. In “Gangs of New York,’’ Day-Lewis drinks DiCaprio’s milk shake. (In fairness, Day-Lewis drinks everyone’s milk shake.) One of the problems with both “The Aviator’’ (2004) and “Shutter Island’’ (2010) is DiCaprio having to carry the movie on his own — which is not what suits him best. He’s much better at catching than pitching. As for “The Departed,’’ you remember Damon and Nicholson, or even Mark Wahlberg, before you remember DiCaprio. Still, DiCaprio and Scorsese feel it works. They have two more projects in development, “Caché’’ and “The Wolf of Wall Street.’’
His own man
All the while, there have been movies that don’t quite fit the pattern: “Catch Me If You Can’’ (what if DiCaprio had taken up with Spielberg instead of Scorsese?), “Blood Diamond’’ (2006), “Body of Lies,’’ “Revolutionary Road,’’ and now “Inception.’’

“Blood Diamond’’ may be the most promising. The picture is bloated and self-important (in other words, Edward Zwick directed), but DiCaprio is very good as a former South African mercenary. His performance suggests that a streak of villainy agrees with him. That was true in “Catch Me If You Can,’’ too. A bit of badness spices DiCaprio’s essential blandness. The affect of those narrow eyes changes from vague smugness to intriguing calculation. This bodes well for “Inception,’’ where he plays a dream thief.

“Inception’’ adds summer blockbuster to DiCaprio’s resume. Will it mark the start of a new phase, too? Although 35 is a dangerous age for female stars, it’s when the male of the species usually begins to hit his stride. DiCaprio hasn’t stumbled much, other than post-“Titanic,’’ but he’s never really glided, either — not the way Clooney has over the past decade, Tom Hanks (his “Catch Me If You Can’’ costar) did in the ’90s, or Nicholson during the ’70s. A few decades hence will he have had a career that, as he sits courtside at Lakers games, makes him recognized as a worthy successor to Jack — or a male Dyan Cannon?

Here's a compare-and-contrast look at two compelling careers.
Your comment is subject to the rules of our Posting Policy
This comment may appear on your public profile. Public Profile FAQ