Bergman Week and a shrine to the auteur await on Fĺrö, Sweden 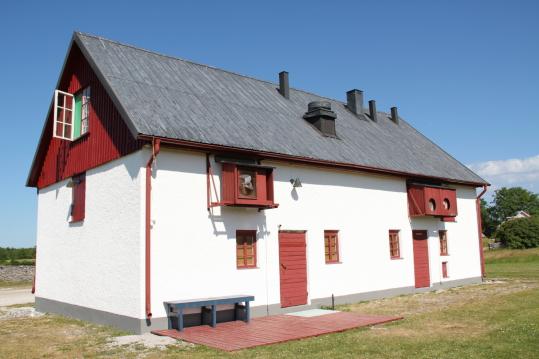 Above: Ingmar Bergman’s screening room on Fårö is inside this converted farmhouse. (Photo by Satyen K. Bordoloi)
By Gerald Peary Globe Correspondent / July 11, 2010

FÅRÖ, Sweden — In liberal Sweden, five-week vacations are mandated by law, so the prosperous often take off in the summer for this island southeast of Stockholm, accessible mainly by a combination of planes, cars, and ferry. In July and August, 5,000 tourists pack Fårö (pronounced “Foreh,’’ with a rolling “r’’) for hikes, bicycling, and jolting leaps into the brisk Baltic Sea.

“It’s much like your Martha’s Vineyard,’’ I was told by a Fårö visitor with a summer house. But winters are desolate and fierce, with soaring winds and blinding snow, and the less than 100 who hunker down are defiant old-timers. The last fishermen have moved on; there’s one cattle farmer left. The sole filmmaker who resided year-round on Fårö died, at age 89, in August 2007. That was Ingmar Bergman, whose prolific art-house career included “Wild Strawberries,’’ “The Seventh Seal,’’ “Persona,’’ and “Fanny and Alexander.’’ Among the most revered directors in the history of cinema, he was the island’s most famous citizen. And now he is its primary attraction for movie fans, especially during Bergman Week, an annual summer festival that is open to the public.

It was in 1960 that Bergman first arrived on Fårö, for the filming of his bleak existentialist classic “Through a Glass Darkly.’’ The craggy, stormy ambience fit perfectly with his vision, and, also, the truly extraordinary light. Back then, no tourists were allowed on Fårö, site of a top-secret Swedish military base. But Bergman loved it immediately. In an epiphany, he told his cinematographer, Sven Nykvist, that he would soon buy a house on this island, and make more movies there. Someday, he would move permanently to Fårö. And he wished to die there.

The promises of half a century ago were kept, including a home and the filming of such world-renowned masterpieces as “Persona,’’ “Shame,’’ “The Passion of Anna,’’ and “Scenes From a Marriage.’’ Bergman sold his Stockholm apartment in 1993, and transferred to Fårö all his belongings. Living alone at the end, he expired in his Fårö bed. He’s buried in the graveyard of Fårö’s only church.

Bergman honored Fårö. How could Fårö honor him?

I found out recently when I was one of eight international journalists invited by the Swedish Institute to not only participate in Bergman Week, which promised screenings, lectures, and special guests, but to venture where few outsiders went before. In addition to seeing where on the island Bergman shot his famous films, we were the first press allowed to watch movies in Bergman’s private theater, and to tour Bergman’s house.

Our initiation was a conversation with Liv Ullmann, star of four key Bergman features made on Fårö, starting with her dazzling film debut in “Persona.’’ For some years, she was married to Bergman, and, for some months each year, they resided in Bergman’s Fårö house. She had returned there this spring for the first time since his funeral, because their once-shared home, thanks to the Bergman Estate Foundation, was opened to selected guests.

At this secluded spot, she and a Norwegian cast rehearsed “Long Day’s Journey Into Night.’’ Later this year, it will be presented on the Oslo stage, with Ullmann as Mary Tyrone.

Said Ullmann: “I had almost five years here with him, and a daughter, and an incredible creative relationship. It’s who I am: Fårö, the people I met, the strange seasons, the light in the middle of the night, the barren winters with no colors.’’ As she talked of bringing her actors to her ex-residence, Ullmann cried freely. “We were the first people in there. How much it was inhabited again!’’

The Bergman Estate Foundation is currently headed by Norwegian novelist Linn Ullmann, the daughter of Liv Ullmann and the filmmaker (he had eight additional children by sundry other wives). It was she who uncovered, in Oslo, “a miracle man,’’ a shy Norwegian millionaire who, after Bergman’s death, bought Bergman’s furniture and possessions at a Stockholm auction, and returned them to Fårö as a donation. It is Linn Ullmann who has made Bergman’s home on Fårö the center of a new artist colony. “Artists and scholars will be able to stay one week to three months, work here, be alone here, for new thoughts, new writing, new sounds,’’ she said. “I’m even looking for applications from people who don’t even know who Ingmar Bergman is, that’s fine.’’

Linn Ullmann made her remarks at the converted farmhouse which, several miles from his home, had been Bergman’s private screening room, equipped for 16 and 35mm showings and with a projectionist on call. “My father would meet us outside on this blue bench,’’ she said, gesturing. “We’d see two films a day, at 3 o’clock for the hardcore, an artistic film, often a silent one. At 7:30, there was a film for a bigger audience, sometimes even with children.’’

Venturing inside, where our group would preview brand-new Swedish features provided by the Swedish Film Institute, we found a tapestry of Bergman’s film of “The Magic Flute,’’ and 16 plush chairs in three rows (admire but don’t sit in Bergman’s designated seat in front, marked by a wool-covered back pillow).

I lingered by the double bed with a white cover in which Bergman died.

On another occasion, we visited Fårö Church, where Bergman, often angrily skeptical of God, apparently worshiped. He’s buried in a private spot far from other graves. His grave is shared with his last wife, the non-actress Ingrid Bergman. She had passed on before him, but her body was exhumed and brought here.

Bergman carefully planned out the 2007 funeral with his lady minister. “He picked the wood for his coffin, and the carpenter,’’ a guide told us. “People were to be dressed in black, and there should be red roses.’’ And what about journalists? Our guide laughed. “The press had to be 100 yards away, in a field where the lambs stand.’’

Gerald Peary is a Suffolk University film professor and a filmmaker (“For the Love of Movies’’). He can be reached at gpeary@geraldpeary.com. For more information on Bergman Week go to www.bergmancenter.se/en/bergman-week/programme.