The Girl Who Played With Fire

Stuck in the middle of a trilogy: 'Girl' sequel dutifully works toward finale 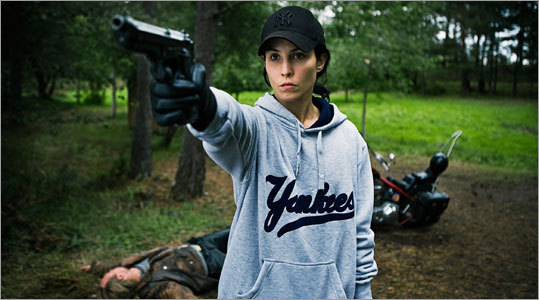 ‘The Girl Who Played With Fire’’ opens with a brutal reprise of the S&M rape scene from “The Girl With the Dragon Tattoo.’’ Gee, it’s great to be back in the old neighborhood. The flashback’s there to reassure us that Nils Bjurman (Peter Andersson) is definitely not a nice man and deserves whatever’s coming to him, which does in fact come to him 15 or so minutes into the film. His death follows the murder of a young investigative reporter (Hans-Christian Thulin) and his girlfriend (Jennie Silfverhjelm). They were killed with Bjurman’s gun, and the fingerprints on it belong to Lisbeth Salander (Noomi Rapace), the testy lesbian hacker punk with the photographic memory and dragon tattoo.

Confused? Then you either haven’t read Stieg Larsson’s best-selling crime-thriller series or seen the first film, in which case I would advise you to stay home and watch an old Greta Garbo movie, because coming to “The Girl Who Played With Fire’’ cold will be like getting slapped by a succession of Swedish masseuses. Nor does this installment resolve its byzantine plot in any satisfactory way. Like so many middle chapters of celebrated trilogies, “Fire’’ exists to get us from the stand-alone (and superior) Part One to the epic climax of Part Three, where All Will Be Made Clear. It’s a bit of a cheat, but rewards are there.

At least this movie dispenses with the oppressive wallowing in misogyny that was a selling point of “Dragon Tattoo’’ (whose Swedish title, after all, was “Men Who Hate Women’’). True, that doomed journalist was about to blow the lid off a Russian sex-trafficking ring with ties to the power elite of Stockholm, but “The Girl Who Played With Fire’’ quickly takes a sharp turn toward a more conventional story line in which the wrongly accused Lisbeth has to prove her innocence while playing hide-and-seek with the law and the villains. It’s basically “The Fugitive’’ with cartilage piercings, and the filmmakers are still quite happy to sell the audience the prurience they condemn in the characters, most notably in a lengthy lesbian sex scene that has not much to do with anything.

Aiding the heroine without actually being in her presence is Mikael Blomkvist (Michael Nyqvist), the stolid star reporter for Millennium magazine whose life was saved by Lisbeth in “The Girl With the Dragon Tattoo.’’ Their relationship remains the most interesting aspect of these stories, a romance of mutual respect and unspoken affection in which the two parties hardly ever share screen time, let alone a bed (at least in this sequel). When Lisbeth hacks her way into Mikael’s laptop to leave a little post-it message of thanks, it’s as close to a declaration of love as “The Girl Who Played With Fire’’ gets. And it’s enough.

As the movie rolls forward, though, burdened with drab camerawork, Daniel Alfredson’s functional direction, and a synthesizer score that calls to mind Tangerine Dream’s better ’80s moments, the plot becomes increasingly personal to Lisbeth and less and less sensible to us. There’s a hulking silent assassin (Mikael Spreitz) who one character aptly describes as a “blond tank’’ and who has a physical defect that renders him impervious to pain. He’s the “Jaws’’ of this series, but the more we find out about him, the less interesting he seems. “The Girl Who Played With Fire’’ narrows instead of broadens, and while the final scenes are bloody indeed, they frustratingly raise questions the film doesn’t care to answer for now.

How does it compare to the book? No idea, I haven’t read it. As with the “Harry Potter’’ series, I’d rather concentrate on what’s in a movie rather than fret over what has been left out. (It’s an arguable approach, so feel free to argue.) What’s in this movie is another brittle, haunting performance by Rapace, who carries herself with a businesslike sorrow more weighty than anything else here, and a procedural thriller more notable for its colorful supporting characters than for the resolution it builds to before making us wait for Part Three. Of course, whenever “The Girl Who Played With Fire’’ threatens to stall, Lisbeth whips out her Taser and tortures another sleazy, abusive man into vomiting forth his dirty secrets. In Sweden, I believe they call this “light entertainment.’’

THE GIRL WHO PLAYED WITH FIRE

Written by: Jonas Frykberg, based on the novel by Stieg Larsson

In Swedish, with subtitles