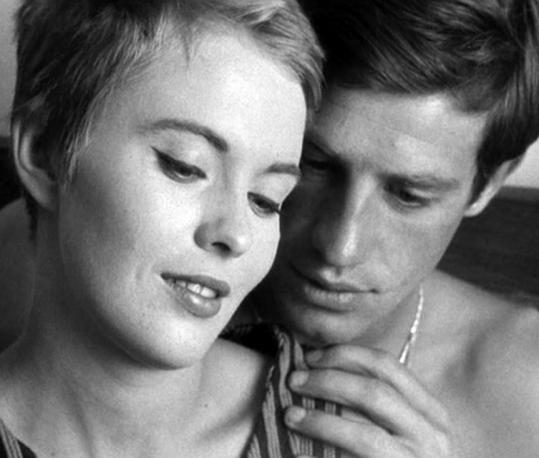 ‘Breathless’’ is 50 years old this year, and everything about the French New Wave classic has been so absorbed into the culture for so long that if you’re coming to it cold — it opens today in a richly restored print with new subtitles — you may wonder what the revolution was about.

A reminder, then: This movie liberated the cinema — the stories you could tell and the ways you could tell them — as clearly and cleanly as Picasso freed painting and the Sex Pistols rebooted rock. Maybe Jean-Luc Godard didn’t invent the jump cut but he was the first to use it as a metaphor for life lived young; the title could apply to the editing itself. And Michel Poiccard, the petty criminal and cop-killer played by Jean-Paul Belmondo, may not have been the first antihero in movies, but he arguably was the first fashioned by the movies, his Bogart worship filling the hole where a moral man would be.

Most of all, it’s the beautifully unstrung pop-art poetry of “Breathless’’ — its sense of action improvised on the fly, the casual sex and casual cruelty, the movie-love evident in every frame — that marked a decisive break with the past and helped influence a generation of Hollywood mavericks in the 1970s. The nicotine blood of this film still flows through the veins of every indie that tries to observe its characters rather than decide their fate for them.

And it almost didn’t happen. Godard was the most aggressive of the critical enfant terribles at Cahiers du Cinema magazine and one of the last to go behind the camera. Because François Truffaut and Claude Chabrol had already made successful films, the backers of “Breathless’’ demanded their input, but Truffaut’s story credit and Chabrol’s “technical adviser’’ position were in name only. Godard got to do his thing, which was shoot wild on the streets of Paris, make up the script as he went, and initially alienate Jean Seberg, the glowing young American actress he had cast as Patricia, Michel’s lover, muse, and downfall.

Few understood what the director was doing, and rumors swirled through the French film industry that “Breathless’’ would be the worst film of the year. No director in his right mind would film a 25-minute bedroom scene in which nothing seems to happen other than two gorgeously vibrant young people renegotiating the stakes by which they’ll live, separately or together, this minute or tomorrow. Godard didn’t help matters with his arrogant pronouncements: “Why do I need a story? I don’t make films, I make cinema.’’ Who knew he’d turn out to be right, at least for six or seven years?

“Breathless’’ has the bones of an unpretentious gangster thriller, the sort Godard adored and championed (he dedicated the film to Hollywood’s least-respected Poverty Row studio, Monogram), and Seberg’s role, if you squint right, has the shady-lady outlines of a classic femme fatale. But Patricia is also touchingly gauche in her existential dilemma — “I’d like to think about something but I can’t seem to,’’ she murmurs at one point — and what Hollywood director would score the moment in which she decides to betray her lover to Mozart’s soaring Clarinet Concerto?

Belmondo (a struggling young actor who became an immediate sensation thanks to his performance here) is the first great Godard hero, if different from those who’d follow: more instinctive, less intellectual, still trying to exist in the infinitely small space between the moment and the experience of the moment. Michel’s offhanded comment to Patricia as they move through nighttime Paris could be the entire movie in a fractal: “Murderers murder, lovers love. Look how gorgeous the Place de la Concorde is tonight.’’

Look how gorgeous “Breathless’’ is, still.

Unrated (as PG: a little language, a little sex, a lot of