Junger film on Afghanistan focuses on the soldier 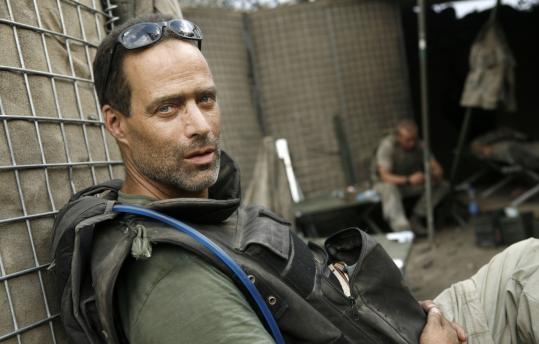 Sebastian Junger has been covering Afghanistan since 1996, but for his book “War’’ and the film “Restrepo,’’ he was embedded with a US Army combat platoon. “This is the first time I’ve felt included in a group — and in a place where inclusion equaled survival,’’ he says. (Tim Hetherington)
By Christopher Wallenberg Globe Correspondent / July 4, 2010

When journalist Sebastian Junger set out to make a documentary about the war in Afghanistan told from the soldier’s perspective, and to chronicle those experiences in a new book, “War,’’ he purposefully avoided wading into thorny political and strategic questions. Not because he thought those debates were not valid, but because he felt they had already been dissected in books, newspaper and magazine articles, and other documentaries.

“Digesting and evaluating the war is one of the food groups we all need to eat. God forbid those films don’t get made, because the public needs to wrestle with these questions,’’ says Junger, best-selling author of “The Perfect Storm,’’ during a recent phone interview. “But when we talk about sending men to war, frankly it’s useful for both sides of the debate to know exactly what it is we’re talking about. We need to talk about war in real terms, because as long as it’s just emotion and ideology, we’re not going to have a useful dialogue.’’

Junger and his co-director, Tim Hetherington, a British photojournalist, sought “to provide an immersive experience that would give viewers an understanding and a feeling of what it’s like to be a soldier in combat,’’ he says, including the fear, the boredom, the humor, and the heartbreak of the soldiers’ daily lives.

The resulting film, “Restrepo,’’ which opened Friday, chronicles the 15-month deployment of the 173d Airborne Brigade’s Battle Company, Second Platoon, at a remote, ramshackle outpost in Afghanistan’s rugged and deadly Korengal Valley in 2007 and 2008. The 15 soldiers stationed in this strategically significant, 6-mile-long valley near the Pakistan border experienced three to five firefights a day. They named their outpost “Restrepo’’ in honor of the platoon’s gregarious medic, who was killed early in the deployment. Between them, Junger and Hetherington made a total of 10 trips to the Korengal, each about a month long, living alongside the soldiers as embedded journalists. The film won the Grand Jury Prize for Documentary at this year’s Sundance Film Festival.

Junger, who initially took on the project as an assignment for Vanity Fair magazine and ABC News, says that military families, and not just those of the soldiers featured in the film, have thanked him for illuminating the emotional and psychological toll that combat exacts on their loved ones.

“The wives in particular have been really grateful, because the men don’t talk about [their experiences] when they come home,’’ says Junger. “It affects the marriage tremendously, and the wives are in this horrible position of being deeply affected by something they have no way of knowing about. So the responses I’ve been getting from people, particularly wives, is essentially: Thank you. Now I understand the thing he couldn’t talk about. If I had seen this movie, if I had read your book before, we might not have gotten divorced.’’

This year’s Oscar-winning film “The Hurt Locker,’’ also told from the soldier’s perspective, suggested that many young men are drawn to war because the adrenaline rush derived from combat can be addictive. As one soldier says in “Restrepo,’’ “You can’t get a better high.’’ But Junger theorizes that soldiers also keep returning to combat for the sense of brotherhood, emotional connection, and identity that arises from the experience.

“These soldiers are basically teenagers, so they don’t know who they are. They don’t know what they can offer society, or vice versa,’’ says Junger, who has been covering Afghanistan since 1996, mostly from the civilian perspective. “Then all of a sudden, they’re put in this situation where all of those questions about identity and purpose are answered. . . . They put on a uniform and suddenly they have social status, and they’re part of this brotherhood where they’d all die for each other. Psychologically and emotionally, that’s a very secure place for a young man to be.’’

Junger, who lives in New York and has a house on Cape Cod (he is a native of Belmont), felt that profound sense of brotherhood during the approximately five months he spent with the platoon.

“This is the first time I’ve felt included in a group — and in a place where inclusion equaled survival,’’ he says. “I felt a tremendous connection with them. It opened me up emotionally in ways that my other life experiences up till now and as a journalist had failed to do.’’

Still, it was an often harrowing ordeal. Hetherington broke his leg while filming a dramatic, nerve-racking offensive in which one soldier was killed and several others seriously wounded. Junger ruptured his Achilles’ tendon out on patrol. When he was in a Humvee that was struck by an IED and, later, when a bullet landed just a few inches from his face, he began to fully appreciate the razor-thin line between life and death.

“I didn’t realize how incredibly hard it was going to be to shoot the film,’’ he says. “But I’m really glad I didn’t know that beforehand.’’

The film was not only physically and emotionally taxing but also financially draining; Junger and Hetherington funded “Restrepo’’ themselves.

So what drives a reporter to put himself in harm’s way to chronicle the experience of war? “I think there are multiple motivations,’’ Junger says. “It can be exciting being in a war zone and maybe even glamorous at times. But mostly, the job feels important and necessary, and most of the wars I’ve covered have been brought to a stop by international action, in large part because the press coverage ended up reaching some critical mass in terms of the atrocities going on, and finally moved people and governments to action.’’