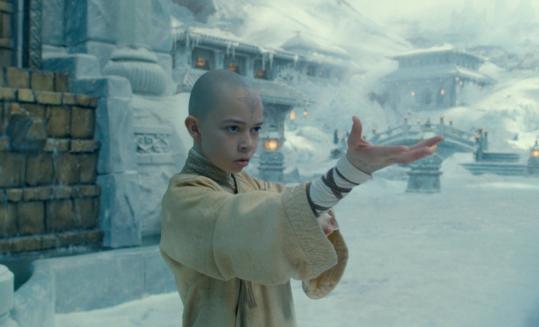 All in all, it was a week that M. Night Shyamalan would probably just as soon forget.

Movie critics delivered a withering verdict on his new film, “The Last Airbender,’’ heaping words like “laughable,’’ “flat,’’ and “fiasco’’ on the director’s latest effort to deliver on the promise he showed with 1999’s “The Sixth Sense.’’ But even before the reviews came in, Shyamalan was on the defensive, caught in the crossfire of a debate over ethnicity and authenticity that has implications beyond the fate of any individual movie.

At issue was Shyamalan’s decision to cast three of the four principal roles in “The Last Airbender’’ with Caucasian actors, even though the anime-style TV series that inspired the film featured lead characters who appeared to be East Asian or Native American. Furious at what they saw as the latest entry in an ignoble Hollywood tradition of “whitewashing,’’ or casting white performers in roles that cried out for minority actors, Asian-American activists launched a boycott of “The Last Airbender,’’ staged demonstrations, and mobilized opposition on Facebook.

“This was a great opportunity to create new Asian-American stars,’’ fumed Guy Aoki, founding president of the Los Angeles-based Media Action Network for Asian-Americans, which urged a movie boycott for the first time in the organization’s 18-year existence. “When you have ready-made material that has Asian or Asian-American people in it, and they still cast white people in it, that’s the last straw.’’

The movie industry has a checkered history, to say the least, on the issue of ethnic sensitivity, from the infamous practice of blackface, in which black characters were played by whites in dark makeup, to such dubious recent decisions as the casting of Jake Gyllenhaal to play the heir to the throne of Persia (now Iran) in this summer’s “Prince of Persia.’’

Asian-American moviegoers have long had to absorb slights, oversights, and worse at the hands of Hollywood. The Charlie Chan movies of the 1930s and ’40s starred white actors as the Chinese-American detective with great powers of deduction but faulty powers of enunciation. In a cringe-inducing portrayal in 1961’s “Breakfast at Tiffany’s,’’ Mickey Rooney donned buck teeth and thick-rimmed glasses to portray Mr. Yunioshi, Audrey Hepburn’s excitable Japanese neighbor. In 2008’s “21,’’ based on a controversial book about MIT students who outwitted Las Vegas casinos, most of the students in the movie were white, even though in real life they were mostly Asian-American. And in one of the most nuanced cases of tone deafness, 2005’s big-screen adaptation of “Memoirs of a Geisha’’ cast Chinese actresses as the Japanese leads.

Now comes “The Last Airbender,’’ which raises a number of questions, including a simple, heartfelt one posed by Tak Toyoshima, the Japanese-American creator and illustrator of “Secret Asian Man’’ comics and the creative director of the Weekly Dig. “The hero that saves the day, why couldn’t he be an Asian kid?’’ said Toyoshima, 39, of Dorchester. “There are plenty of Asian actors out there who could do the same thing.’’

“I’m disappointed,’’ he added. “Again. It happened again. I lump it in with all the other movies that have done the exact same thing.’’

Neither Paramount nor Shyamalan responded to Globe requests for comment about “The Last Airbender.’’

“The Last Airbender’’ is a live-action adaptation of “Avatar: The Last Airbender,’’ an animated series that attracted a devoted following when it aired on the Nickelodeon cable channel from 2005 to 2008. Shyamalan’s film was originally slated to be a trilogy, though Paramount will doubtless count the box office returns before committing to two more movies.

In “The Last Airbender,’’ whose script was written by Shyamalan, the world encompasses four nations: Earth, Air, Water, and Fire. Within each nation are “benders,’’ who can manipulate the elements. When the Fire Nation launches a war whose goal is the enslavement of the Earth, Water, and Air nations, an “Airbender’’ named Aang learns that he is the only “avatar’’ who possesses the power to manipulate all four elements. Consequently, the onus is on Aang to prevent worldwide catastrophe.

The character of Aang is played by Noah Ringer; the character of Katara, a “Waterbender’’ who becomes his ally, is played by Nicola Peltz; and her brother, Sokka, is played by Jackson Rathbone, who also appears in “Twilight.’’ All three actors are non-Asian. Leading the charge for the Fire Nation is a “Firebender’’ named Zuko. The pop singer Jesse McCartney, who is white, was originally cast as Zuko. When he dropped out due to scheduling conflicts, he was replaced by Dev Patel, a British actor of Indian descent who starred in the Oscar-winning “Slumdog Millionaire.’’

The controversy started to build a year ago when fans learned that all four lead roles had been cast with non-Asian actors. The addition of Patel to the cast did not mollify critics.

Initially at least, Shyamalan seemed unruffled and even oblivious to the uproar. “Ultimately, this movie, and then the three movies, will be the most culturally diverse tent-pole movies ever released, period,’’ he told the Los Angeles Times last summer.

As the controversy continued to build in recent weeks, however, Paramount extended an olive branch to critics, inviting Aoki and other activists to a screening last week and releasing a statement to the LA Times noting that the film “has 23 credited speaking roles — more than half of which feature Asian and Pan Asian actors of Korean, Japanese, and Indian descent. . . . We believe fans of the original and new audiences alike will respond positively once they see it.’’

Michael Le didn’t. Le, 26, an engineer in Los Angeles, was a fan of the TV show and has emerged as one of the fiercest critics of Shyamalan’s live-action adaptation of the series. He serves as spokesman for an online community called Racebending.com, which was founded by fans of the TV show and acts as a watchdog on diversity issues in Hollywood. After attending the Paramount screening last week, Le described the film to the Globe as “absolutely atrocious,’’ adding: “Even ignoring the whitewashing, the film was a complete disaster.’’

He is not impressed by Paramount’s statement about the number of speaking roles that went to actors of Asian descent. “It speaks to a glass ceiling,’’ said Le. “Paramount can boast about a lot of background actors, a lot of secondary characters, but the top three roles are all given to white actors. That’s stunning, when the original source material was clearly rooted in Asian and Native American culture.’’

“ ‘Airbender’ is not an isolated case,’’ he added. “This kind of whitewashing goes on all the time. As an Asian-American growing up, it was very hard for me to find heroes I could look up to. That experience of seeing my face removed from entertainment, it definitely has an impact on you growing up.’’