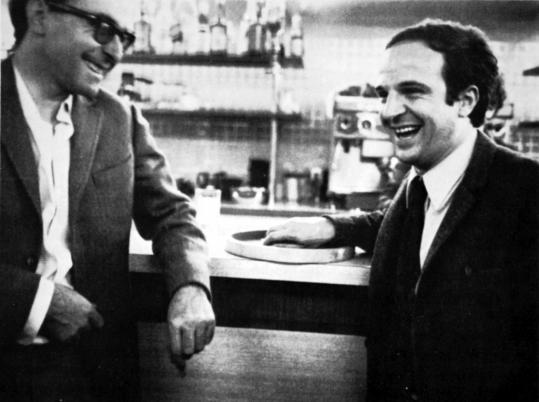 Jen-Luc Godard (in glasses) and Francois Truffaut in "Two in the Wave."
By Mark Feeney Globe Staff / July 4, 2010

Since globalization is as much about culture as economics, it makes less and less sense to think in terms of national film styles. Or does it? The 15th annual Boston French Film Festival, which starts at the Museum of Fine Arts on Thursday and runs through July 25, makes a strong case both ways.

Among the 23 titles, all of them Boston premieres, is one with a soundtrack by Philip Glass (“Regrets’’). Nothing very French about that, even if Glass did study in Paris with Nadia Boulanger. A comedy (“Heartbreaker’’) has a camera-ready premise worthy of Judd Apatow — a man makes a living breaking up bad relationships. Much of the dialogue in two films is Russian (“Farewell,’’ “The Concert’’). And two others are set in Africa (“White Material,’’ “The Time of the Charity Fete Is Over’’).

Yet the festival demonstrates how vibrant French cinematic culture remains — does any other country love the movies the way France does? And it reminds us that at least three things about French films remain sublimely . . . well, French: an extraordinary cinematic tradition; an awful lot of cigarette-smoking (the museum might want to think about offering nicotine patches at the entrance to the Remis Auditorium); and Isabelle Huppert.

The closest thing Hollywood has to the fierce and fearless star of “White Material’’ is Judy Davis. Davis hasn’t exactly been treated as a national treasure, in either her native Australia or here, as Huppert has in France — and deservedly so.

Here are some festival highlights.

The French film tradition is very much on display in two documentaries. Emmanuel Laurent’s “Two in the Wave’’ uses interviews, film clips, and period footage to look at how Francois Truffaut and Jean-Luc Godard led the cinematic revolution that was the French New Wave. The documentary, which is very good at communicating the enormous excitement and energy of the late ’50s and ’60s, is as much about friendship as filmmaking. Maybe comradeship would be a better word. Once the revolution had been won on the screen, Godard was one among many who tried to transfer it to the streets, which led to a bitter break with Truffaut. In a lovely coda, the documentary ends with Jean-Pierre Leaud’s screen test for “The 400 Blows.’’

Another major New Wave filmmaker, Jacques Rivette, continues to work. His “Around a Small Mountain’’ manages to be spare, elegant, and understated despite being set amid a circus. To be sure, it’s a small and very forlorn circus, wearily touring Languedoc. Jane Birkin runs it. Sergio Castellitto is the Italian stranger who in a very restrained fashion falls in love with her. In a way that feels very French, this is a movie about grown-ups acting like grown-ups. It actually feels a bit like the work of another New Wave director, the late Eric Rohmer. The movie ends with not one but two characters asking, “Who knows?’’ It’s posed more as observation than question.

Henri-Georges Clouzot was part of the French film establishment the New Wave successfully sought to overthrow. With his world turned upside down, Clouzot had a hard time figuring out which side was up. Serge Bromberg and Ruxandra Medrea’s “Henri-Georges Clouzot’s ‘Inferno’ ’’ is a bit like “Hearts of Darkness,’’ the 1991 documentary about the making of “Apocalypse Now.’’ Both are about a filmmaker who’s clearly lost his way. The difference is that Francis Ford Coppola, even if he never really recovered from the effort, managed to pull off his movie. Clouzot didn’t. The bits of “Inferno’’ that we see range from the remarkable (no director has ever been able to get across emotional claustrophobia the way Clouzot was) to the remarkably awful (Op Art doesn’t transfer all that well to the screen). Nineteen sixty-four, the year of the “Inferno’’ shoot, might be seen as the pivot on which the ’60s swung. For Clouzot, the pivot not only failed to swing. It fell off the wall and crushed his foot.

Alain Cavalier, a year younger than Truffaut, wasn’t associated with the New Wave. Like the two documentaries, his “Irene’’ is very much about the past, but an intensely personal one. Part trance, part exorcism, it’s a video diary about Cavalier’s wife, who died in 1972. “I don’t care if people think I’m obsessed,’’ he says in his hypnotic (even seductive) voice. “I am.’’ Intoning the narration as he shoots, he shows us places and objects associated with Irene. It’s an almost unbearably intimate portrait of a marriage.

“Irene’’ offers a brief glimpse of Catherine Deneuve, seen in a clip from Cavalier’s 1968 feature, “Heartbeat.’’ Deneuve’s daughter, Chiara Mastroianni, plays the title role in “Making Plans for Lena.’’ Lena, 30-ish, is a divorced mother of two, beset by various family members who want to help her straighten out her life. What makes this intrusiveness so annoying is that her life really does need straightening out — and she knows it. The sense of fraught generational dynamics at the family home in Brittany is very French. Still, the movie “Lena’’ most recalls may be American, “An Unmarried Woman.’’

“A Married Man and Married Woman (But Not to Each Other)’’ could be an alternate title for Cedric Kahn’s “Regrets.’’ High-school sweethearts (all right, lycee sweethearts) Yvan Attal and Valeria Bruni Tedeschi reunite a quarter-century later when Attal, a Paris architect, returns home after his mother enters the hospital. The film’s portrayal of middle-age passion is potent and raw, though not as potent and raw as Nina Simone’s rendition of “Sinnerman’’ on the soundtrack.

A very different piece of music, the Tchaikovsky Violin Concerto, has a very prominent role in Radu Mihaileanu’s “The Concert.’’ That’s the sole piece on the program when a makeshift group of Russian musicians masquerade as the Bolshoi Orchestra for a Paris performance. Their political views put their careers on hiatus during the Cold War, and now’s their chance to shine — or make fools of themselves. Melanie Laurent, of “Inglourious Basterds,’’ plays the French soloist, who’s in for an even bigger surprise than learning the identity of the orchestra. (“The Concert’’ opens July 30 at the Kendall.)

The Cold War looms even larger, and far more seriously, in writer-director Christian Carion’s “Farewell.’’ That’s the code name of a high-placed Soviet official who spies for the French during the ’80s. It’s based on a true story, but the sight of Fred Ward as Ronald Reagan or Willem Dafoe as head of the CIA doesn’t increase the realism quotient. “Farewell’’ also boasts a truly bizarre bit of subtitling. “Au revoir,’’ a KGB interrogator says to his prisoner. “Adieu,’’ the subtitle says. Talk about six of one, half a dozen of the other!

“Farewell’’ feels like an American spy thriller in a French suit. A box-office smash in France, Pascal Chaumeil’s “Heartbreaker’’ feels like an American remake waiting to happen. Some of it is pretty funny. All of it is shamelessly slick. Romain Duris hires himself out to break up romances. Vanessa Paradis (better known over here as the significant other of Johnny Depp) is the latest object of Duris’s disaffection. The Monte Carlo locations are even better looking than Duris and Paradis are.

Biarritz, where much of Arnaud and Jean-Marie Larrieu’s “Happy End’’ is set, looks even better than Monte Carlo. Mathieu Amalric (the villain in “Quantum of Solace’’) is the hero. The French title is “The Final Days of the World,’’ which is a far more accurate rendering of events. The end of the world does seem to have arrived, all right, so Amalric’s bug eyes have a lot to bug out over: terrorist explosions, epidemics, widespread contamination, nuclear attacks, and the violating of all sorts of sexual taboos (often with Amalric’s participation). A jaunty tone throughout helps keep things quite watchable, even if it ratchets up the general level of nuttiness. That said, a bit of documentary footage of the running of the bulls in Pamplona is far wackier than anything else in the movie.

“Happy End’’ shows the end of the world. Claire Denis’s “White Material’’ feels like the end of the world. That’s how consistent its sense of foreboding is. The film’s set in an unnamed African country (Denis grew up in French colonial Africa) where rebels are on the verge of overthrowing whatever government there still is. Huppert owns a coffee plantation and refuses to flee. Her implacability would be utterly implausible, except that Huppert wills you into belief. What even she can’t make plausible is that someone with Huppert’s complexion could venture outdoors in that part of west Africa. She’d need to use sunblock with an SPF rating in the low three figures.

Finally, in case you were wondering, “Le Petit Nicolas’’ is not about a certain French president of below-average stature. Based on a well-known French children’s book, it’s about a little boy who’s annoyed by his mother’s pregnancy because he hates change. Carla Bruni does not play the mother.