An up-close yet impersonal look at war 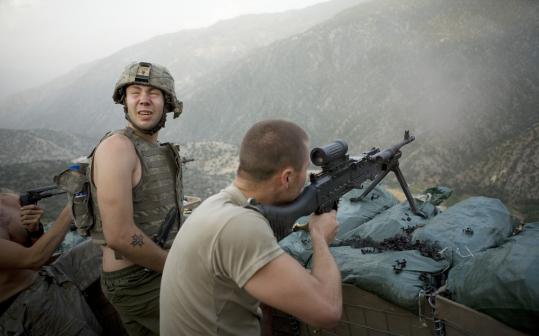 In “Restrepo,’’ Misha Pemble is startled by the sound of gunfire during a firefight with insurgents in Afghanistan. (Tim Hetherington/Outpost Films)
By Wesley Morris Globe Staff / July 2, 2010

The gunshots in “Restrepo’’ don’t sound like what you hear in movies. They don’t thunder or boom. They sound like cracks and drumbeats — harmless or, at least, less harmful.

You’re not listening for violence. In the safe, cool dark of a movie theater in high summer, “crack, crack, crack’’ isn’t a knell of danger. It’s the soundtrack for the Fourth of July. And yet danger in this documentary, which holes up with an Army platoon stationed for 15 months in Afghanistan’s Korengal Valley in 2007 and 2008, is omnipresent, even when it’s never altogether clear where it’s coming from. For every moment of “action,’’ there are two of inaction, the sitting around and waiting, like firemen between alarms.

If these wars in Afghanistan and Iraq seem endless, so does the range of how to document the experience of fighting them. “Restrepo’’ opts for deep sensory immersion. We are not there, yet the illusion of our being deployed holds. On the ground, the camera often remains inches away from much of what it sees: faces, terrain, artillery. There’s not much else, but these few elements are presented with skillful variety.

This is the result of a collaboration between the English photographer Tim Hetherington and the American journalist Sebastian Junger (his books include “The Perfect Storm’’). As a movie, it exists somewhere between the expertise of both men. It’s neither strictly pictorial nor necessarily reportorial. This isn’t to say that the filmmaking is ineffective. For one thing, the camera sees everything with crisp immediacy. For another, Hetherington and Junger are so thoroughly enmeshed with the 15 or so men in a combat team from Battle Company of the 173d Airborne Brigade that we experience the problems of fighting this war almost firsthand.

The Korengal Valley sits near the Pakistan border and is considered one of the deadliest regions in the country. The soldiers name their outpost for Juan Restrepo, a platoon medic killed in battle, and their mission entails securing the area for the building of a major road. As Captain Dan Kearney explains in a meeting with local elders, completion of the road should provide Korengal with degrees of infrastructure and prosperity. The old men are skeptical of both Kearney’s pledge and the presence of his troops in their lives. Surely, this campaign won’t be casualty-free, they argue. But Kearney insists that everybody focus on the task at hand.

The Americans need cooperation. The villagers need the Americans to understand that the price for cooperation is likely to be Taliban reprisals. The picture that emerges is of war that, if not unwinnable, is a Sisyphean battle in a country made almost entirely of hills and boulders. The film cuts between scenes of life on the ground and interviews with the men of OP Restrepo after their 15-month deployment. And not all of what we see is grim. There are at least two scenes of horseplay that border on the homoerotic; one involves four guys jumping and pushing into each other while they listen to a Euro-disco version of Samantha Fox’s “Touch Me.’’

The film’s main focus, though, is the trauma of combat. Sitting in a valley, OP Restrepo is left more or less exposed to enemy fire. The soldiers are constantly nervous about an ambush. Eventually, that ambush arrives during a campaign they’ve called Operation Rock Avalanche. It’s a chaotic scene of shooting and uncertainty that leaves one man dead and several others in shock. That firefight follows an equally upsetting tour the Americans make of families hit by an airstrike. The bombing took out several enemy combatants, but we see domestic debris and children covered in soot. Neither the Afghans nor the Americans can totally comprehend the collateral damage.

Hetherington and Junger went to Korengal Valley on assignment for Vanity Fair and ABC News. They wound up with 150 hours of footage, which became this claustrophobic distillation of their immersion. A film almost entirely from the soldier’s point of view provides a valuable sense of daily military life but little of the benefit of experiencing the personal toll of the war that other films have shown us. This might be a backhanded achievement. The movie puts us so close to so much yet keeps its emotional distance — as if to say, no matter how much we see, we’ll never truly know.

Rated: R (language throughout including some depictions of violence)