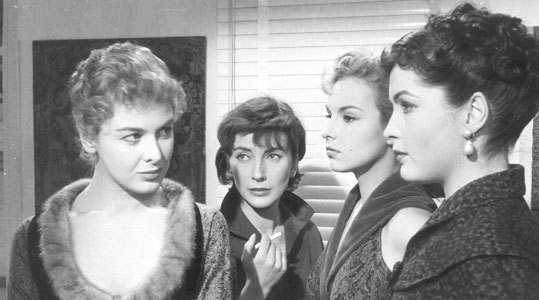 ‘The Girlfriends (Le Amiche)’’ opens with a long, loving pan of the northern Italian city of Turin underneath the credits. It’s 1955, and Michelangelo Antonioni is poised between his realist roots and the chic anomie of his ’60s heyday. Clearly, he meant the movie, adapted from a novella by Cesare Pavese, to evoke that particular place. Seen now, more than half a century later, it seems much more evocative of a particular time: when well-off, stylish women wore pencil skirts and pillbox hats; they could have love or work, but not both; and choosing the wrong lover might lead to suicide attempts or at least having to flee on an overnight train.

Much of that description could fit a classic women’s picture. And Yvonne Furneaux, as Momina, the most manipulative of the five females who give the film its title, could be a meaner, shrewder version of the Rosalind Russell character in “The Women.’’

But such is Antonioni’s intelligence — and so assured is his direction — that “The Girlfriends’’ is about as much a women’s picture as “Zabriskie Point’’ is a western or “The Passenger’’ a road picture. Yes, there are numerous genre points in common — mainly as points of departure, though. Antonioni’s ability to use the screen’s illusion of depth or the way he lends an eloquence to the space between characters is a marvel. How he has these people stand is so much more expressive than anything they say.

Clelia (Eleonora Rossi Drago) grew up poor in Turin and now lives relatively rich in Rome. She’s back in town to oversee the opening of a store for the couture house that employs her. Momina is having an affair with the architect overseeing the project (Franco Fabrizi). Her young friend Rosetta is smitten with a painter, Lorenzo (Gabriele Ferzetti), who lives with his fiancee, Nene (Valentina Cortese), herself a talented artist. Actually, she’s more talented than he is — which presents problems. Finally, there’s Mariella (Anna Maria Pancani), the Lisa Kudrow of these particular friends, only she’s shorter and curvier and far more focused on Topic A.

To emphasize the plot or characters of “The Girlfriends’’ is to do the film a radical disservice. “Sex and the Citta’’ it’s not. Antonioni’s interest is in the emptiness around and within these people. Even the friends and lovers (especially the friends and lovers?) seem so radically apart. The surfaces and details are so lovingly rendered, from the smudge of plaster on the jacket of one swain to the grains of sand on that of another, a viewer can easily overlook the sense of isolation throughout all the busyness. Once you notice it, though, you keep expecting to see Monica Vitti show up, looking puzzled and giving Ferzetti the eye. Within these soapy genre confines, “L’avventura’’ looms.

Written by: Suso Cecchi d’Amico, Alba De Cespedes, and Antonioni (based on a novella by Cesare Pavese)

At: Museum of Fine Arts,

today and various dates through July 9