Witless humor with a heart in ‘Grown Ups’ 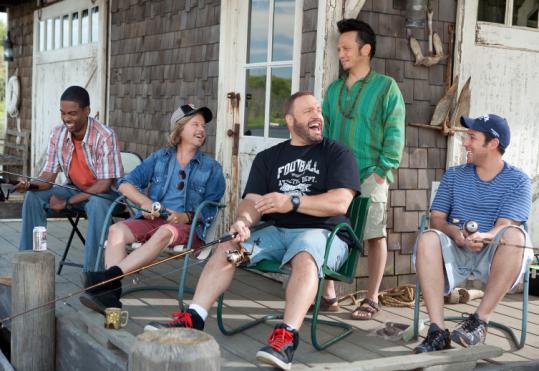 ‘Grown Ups’’ doesn’t try very hard for its laughs. Adam Sandler asked some of his funny friends — Chris Rock, Kevin James, David Spade, and Rob Schneider — to hang out with him for the time necessary to shoot this movie about childhood friends (and former preteen basketball champions) reunited for a weekend of family-friendly nonsense at a lake house. If you’ve ever wondered what “The Big Chill’’ would be like with old “Saturday Night Live’’ castmates — well, why would you ever have done that?

The occasion for the reunion is the recent death of their old coach. Once that’s shrugged off, the movie can begin practicing Teflon comedy, where nothing bad sticks to the characters. At the funeral, the boys see each other for the first time in years and proceed to put each other down. The giant dog in the back seat of James’s convertible is compared to his mother. James makes fun of Rock’s palsied grip by noting that it’s “like shaking hands with an eagle.’’ Ouch. Not really, though. The insults are meant more to amuse us than anger the characters — and some of them are pretty funny.

But that joshing approach to humor extends to marriage and family relationships. We are shown much that’s disturbing: a breast-feeding toddler, a man tumbling down a hill, Salma Hayek married to Sandler. But none of it is taken as seriously as the nice, sincere moments. The thing about Teflon is that it’s not selective. So it’s slightly illogical that the good will sticks and the mean stuff doesn’t.

Above all, this is a movie of vast and vexing illogic. And it’s not just the incongruity of the marriages — James is with Maria Bello, Rock with Maya Rudolph. They’re such different comedians that some acting is required for the relationships to make sense, and Rock hasn’t actually acted since “New Jack City.’’ Meanwhile, Sandler’s character is a very successful Hollywood agent. Why does he pretend that his brats’ nanny (Di Quon) is a friend studying for med school? Why does it take so long for someone to call him on it? And why would Rudolph bring her loudmouth mother (Ebony Jo-Ann)? Why, for the fart jokes, of course — and the opportunity to tell you that her character’s name is Mama Ronzoni. (It should be noted that the women are more naturally funny in this movie than the men, including the shockingly at ease Joyce Van Patten, who plays Schneider’s 70-something lady love.)

Perhaps the relationships and themes under consideration are so familiar (the seesaw of marriage, the hassles of parenthood, nostalgia for lost time) that we can make do with the shorthand. But the way the movie handles the peculiarities in, say, James and Bello’s onscreen marriage only draws more attention to their dysfunction.

It’s especially hard for James to get away with letting things roll off of him. His character is miserable, for one thing. For another, James might be a better actor than he realizes. Despite his girth, he moves like a dancer. All his self-confidence is physical. He laughs off every embarrassment that he confesses (like a food addiction) or endures (teasing about Bello’s failure to wean her breast-feeding child). But there’s a discomfort in his face that often suggests a range of pain and shame. He deserves better movies, even if he doesn’t believe it.

Yet, despite how cruddy-looking and deplorably made this movie is — Dennis Dugan, you strike again! — it does have a heart. There’s a happy sequence set at a water park (Wareham’s Water Wizz, to be exact) that obviates the plotlessness and pointlessness afoot. Sandler wrote “Grown Ups’’ with Fred Wolf, and he likes many of the characters in his movies, even the adult bully that the underemployed comedian Colin Quinn plays here. I just wish Sandler took movie comedy more seriously than he does. The man partly responsible for two shameless social farces “I Now Pronounce You Chuck & Larry’’ and “You Don’t Mess With the Zohan’’ is being lazy even by the standards of “Big Daddy.’’

A moment of cheesiness often follows a flight of debauchery. It makes sense. In Sandler’s movies, men don’t cry; they urinate. So the scene in which the stars empty their bladders and change the color of a swimming pool’s water might be the weepiest of the year.