Moviegoing in the land of Almodóvar 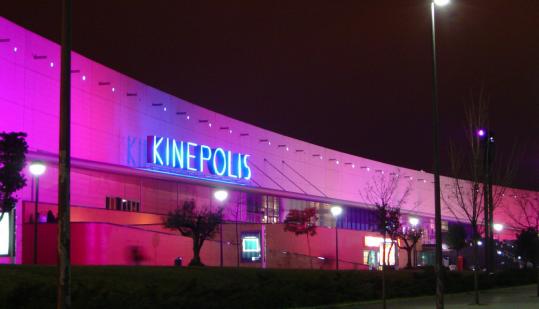 Today, Spain is home to the largest megaplex in the world: Kinepolis, which opened in Madrid in 1998, has 25 screens and a total seating capacity of 9,200.
By Laura Bennett Globe Correspondent / June 20, 2010

MADRID — Watching “Iron Man 2’’ dubbed into Spanish, some moments of noticeable discord are hard to ignore: when Robert Downey Jr.’s lips open and close wordlessly, at odds with his voice. Gwyneth Paltrow sounds more warbly and shrill than usual. Mickey Rourke’s voice is slicker, less gritty, with a tinge of game-show-host swagger.

In Spain, subtitles are rare and doblaje, or dubbing, is famously artful. But the moviegoing experience here — as in much of Europe — hinges on the friction between the homegrown and the imported, seeing Hollywood reprocessed through a native lens.

I’ve been living in Spain since September, first in Pamplona and then in Madrid. Pamplona, emptied of bulls, left little for an unmoored foreigner to do besides wander cobblestone streets and go to the movies. Madrid is a cinema hotbed. Its main avenue, Gran Vía, is a shrine to the shifting panorama of Hollywood. Posters for “Alicia en el país de las maravillas’’ (“Alice in Wonderland’’), “Príncipe de Persia’’ (“Prince of Persia’’), and “Sexo en Nueva York 2’’ (“Sex and the City 2’’) loom over the street. Sarah Jessica Parker, fierce in mid-strut and 20 feet tall, is the first thing I see when I leave my apartment.

Historically, Spanish cinema attendance has been among the highest in the European Union. Piracy caused audiences to dwindle considerably over the past few years, but with the rise of 3-D, box-office numbers jumped in 2009.

“Movies have always been so ingrained in our lives,’’ said Marta Sanchez, who worked at 20th Century Fox in Madrid and now runs Pragda, an organization that promotes and distributes Spanish films in North America. “For years, it was the only thing you could do,’’ she said. Franco’s dictatorship, which ended in 1975, imposed strict curfews and limits on public entertainment.

Today, Spain is home to the largest megaplex in the world: Kinepolis, opened in 1998, with 25 screens and a total seating capacity of 9,200.

Kinepolis is like no movie theater I’ve ever seen. Skylights rim its high ceiling, and the lobby looks like the hull of an enormous ship. Black leather chairs are clustered in lounges with faintly thumping nightclub beats. Screens broadcast the location for each film and flash the number of remaining seats. The two concession stands are more like mini-marts, with glass cases stuffed full of candy and flavored popcorn. But in all that yawning space, not one screen offers a movie in its original language. Every film, from “El Retrato de Dorian Gray’’ to “Garfield,’’ is dubbed.

“We’ve been accustomed to dubbing for so long,’’ Sanchez said, “that many Spaniards still don’t have the language skills or the patience to watch a movie in English.’’

Franco first used dubbing as a mode of censorship to control the meaning of films, instill national patriotism, and ensure that Spaniards were exposed to only one language, Castilian. In the 1953 film “Mogambo,’’ starring Clark Gable and Ava Gardner, dubbers rewrote the dialogue to make it seem like the lovers were siblings. Franco deemed love affairs too vulgar for Spanish audiences. Today, many films in Spain are dubbed into Castilian, Catalán, Basque, and Galician.

When “Two Lovers,’’ starring Joaquin Phoenix, Gwyneth Paltrow, and Vinessa Shaw, came out, I managed to find a theater showing the movie in English. One particular scene struck me: While Phoenix, hopelessly enamored, is visiting a bedridden Paltrow, her boyfriend shows up. Paltrow urges Phoenix to hide behind a door. “That was [expletive] weird,’’ he says, when the boyfriend leaves.

It is a great moment. The audience, mostly Anglophones like myself, chuckled appreciatively. First, Phoenix is a master of the throwaway line, and his delivery is perfectly casual and frank. Second, the word “weird’’— not just “odd’’ or “strange,’’ as in unexpected and incongruous, but “weird,’’ with its whiff of the socially unsuitable — captures the precise brand of discomfort that applies in situations like this one. “Weird’’ does not exist in Spanish.

When I saw “Two Lovers’’ dubbed, I waited for that scene. I expected to be disappointed. But Sergio Zamora, who voices Phoenix, pulled it off. The translation wasn’t exact, but the tone was. The same appreciative chuckle moved through the audience.

“The quality of dubbing is so good here that most people prefer doblaje to subtitles,’’ said Ignasi Guardans, president of the Institute of Cinematography and Audiovisual Arts, a branch of the Spanish Ministry of Culture. “It puts foreign films in an unfairly competitive position in relation to Spanish cinema,’’ he added.

Domestic productions account for about 16 percent of the market in Spain. The government has tried to protect the indigenous film industry by imposing quotas on dubbing and the number of US movies small theaters can show.

Dubbing is so entrenched in Spain that a few doblaje actors are household names. Constantino Romero, the commanding baritone who voiced Clint Eastwood for four decades, is one of the most famous. He has also dubbed Darth Vader and the Terminator. “Luke, yo soy tu padre’’ (“Luke, I am your father’’) and “Volveré’’ (“I’ll be back’’) both came from his formidable pipes. Since many doblaje actors do voice-overs without appearing onscreen, Sanchez said, “You [can be] watching TV and suddenly there is a coffee commercial with the voice of Clint Eastwood.’’

Maybe it’s the way doblaje mixes the Hollywood brand with Spanish culture, but for me seeing American films here has felt distinctly new. Perhaps part of what’s missing in Spain is the jaded, truant vibe of the American movie theater: boys on skateboards traversing back lots, thickly eye-linered teens clogging the sidewalk.

Outside Kinepolis on a Thursday night, excitement was running high. I saw a pack of jittery middle school girls dissecting Sarah Jessica Parker’s outfits in “Sexo en Nueva York 2’’ and an older couple reeling from their first venture into 3-D. But surprisingly, in light of the Spanish flair for idle revelry, I didn’t see many loiterers puffing cigarettes and passing time.

Movies in Spain feel like a grander affair. I still can’t get over the assigned seats, my own plot of real estate amid all the occupied rows. Or the usher in a blue suit who shows me to my row with a sweep of his flashlight when I arrive late. Or the broader armrests, the plusher chairs.

I watched “Alicia en el país de las maravillas’’ shortly after its release in Spain — more than a month after it came out in the States. An actor named Ricardo Tejedo voiced the Mad Hatter. Luis Posada commonly dubs Johnny Depp. Later, perusing a thread in an online Spanish doblaje forum, I read a post that said, by way of complaint: “For me, Johnny Depp without Luis Posada is not Johnny Depp.’’ And so homegrown icons melt into imported ones.

“It’s exciting for people in Spain to believe this famous actor is talking in Spanish,’’ said Miguel Ángel Montero, an actor and director based in Madrid who has dubbed Dustin Hoffman, Fred Astaire, and John Wayne. “The audience comes to associate that voice with that actor’s face, and they identify with him more that way.’’

About halfway through “Alicia en el país de las maravillas,’’ my ears began to adjust. The weirdness of Johnny Depp’s bodiless voice was fading. I’ll admit I missed the way Helena Bonham Carter shrieks, “Off with her head!’’ But as I left, I considered that the Red Queen’s howl, “¡Que le corten la cabeza!,’’ might even pack more of a punch.

Laura Bennett can be reached at bennett.laura.ann@gmail.com