Numbing ‘8’ does a number on Mormon-backed measure 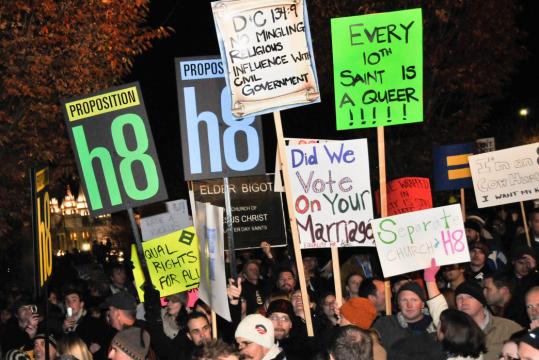 In November 2008 California voters passed a ballot measure, Proposition 8, amending the state constitution. Consisting of just 14 words — “Only marriage between a man and a woman is valid or recognized in California’’ — it overturned a ruling by the state Supreme Court earlier that year invalidating California’s ban on same-sex marriages. A total of $83 million was spent by both sides, making the vote on Proposition 8 the most expensive nonpresidential election in US history.

“8: The Mormon Proposition’’ is a deeply felt, and numbingly partisan, documentary about how the Mormon Church both bankrolled and masterminded passage of the initiative. It’s so one-sided you hardly care after a while that the side it’s on is so clearly the right one.

More than 30 persons are interviewed on camera. Only two are opponents of same-sex marriage — and one of those two, Utah state Senator Chris Buttars, is such a bombs-away bozo he does more harm to his cause than all the talking heads put together from organizations with names like Californians Against Hate and Alliance for Justice and Americans United for Separation of Church and State. When several Mormon elders are heard in screen-shot footage, they’re shown in a heavily pixilated format that makes them look like Big Brother in “Nineteen Eighty-Four.’’

It’s no revelation how much the Mormon Church had to do with passage of Proposition 8. The sad thing about “8’’ is that its unrelenting partisanship can obscure just how shocking some of the details of the church’s involvement are. Two percent of Californians are Mormon, yet 71 percent of the funds backing passage of the proposition came from Mormon sources. In the last week of the campaign, $3 million in contributions came from Utah. That phrase much beloved of conservatives in the ’60s, outside agitators, takes on a whole new meaning.

The church’s opposition to same-sex marriage arises from a profound anti-gay bias in its doctrines. “8’’ is two films, really: one on the ballot proposition, the other on Mormonism and homosexuality. Interviews with gay Mormons who’ve been ostracized by their families, tried to commit suicide, or, in one particularly gruesome instance, endured behavior-modification techniques worthy of “A Clockwork Orange,’’ are heartbreaking.

Past a certain point, those interviews also cease to be illuminating. There are many decent and enlightened people who have no problem accepting these views that the filmmakers (and, presumably, their audience) find indecent and unenlightened. Including at least a few such people in “8’’ would have gone a long way toward making it not just strong as documentary but also stronger as polemic.

Ostensibly universal principles of tolerance bump up against ostensibly universal principles of religious dogma. Although you may feel that Harvey Milk has a lot more to offer as moral guide than the Angel Moroni does (I sure do), millions of people would find any such view incomprehensible as well as offensive. Few pleasures in this life are as satisfying as preaching to the choir. Even fewer are so ineffective. The only place where it’s more ineffective is in the afterlife.

8: The Mormon Proposition Directed by: Reed Cowan and Steven Greenstreet