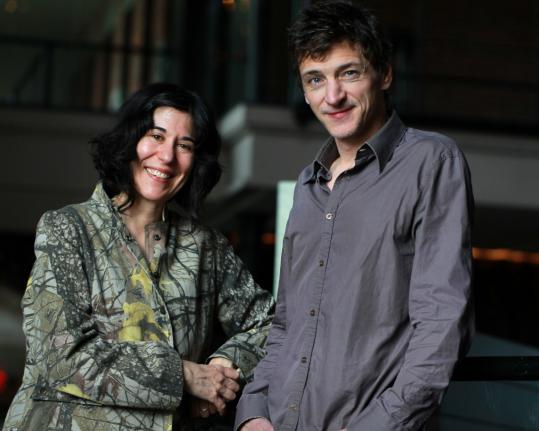 On stage earlier this spring to answer questions after the Independent Film Festival of Boston’s screening of “Winter’s Bone,’’ director Debra Granik wore a tailored knee-length coat. Up close, in an interview at the Liberty Hotel, that coat revealed an unexpected twig-and-leaf pattern, the kind of camouflage worn by the characters that populate the Missouri Ozarks, the setting of her Sundance Grand Jury Prize-winning drama. It opens here Friday.

“I worried that it might be too much,’’ Granik said about the pattern, a worry emblematic of the concern she carried through every stage of the project. It began when she read Daniel Woodrell’s novel about Ree Dolly, a 17-year-old determined to track down her father who signed over the family’s homestead as bail bond collateral. “I read it in one sitting,’’ Granik said.

The movie follows the novel’s lead. Ree (Jennifer Lawrence, “The Burning Plain’’) has quit school to care for her two younger siblings and holed-up mother while her father serves time for dealing methamphetamines. When Ree tromps through the woods to locate him, her search grows more and more ominous.

Granik spent almost a decade in Boston learning film from the ground up. She took courses at Somerville Community Access, freelanced for local documentary filmmakers, and haunted every art house, including the old Orson Welles Cinema. Filming a series of health and safety videos granted access to subcultures otherwise foreign to her — plastic manufacturing in Leominster, orchards at harvest — and she was hooked.

Since moving to New York for film school, she’s zeroed in on fiction. One previous feature, “Down to the Bone,’’ follows, with chilling accuracy, a working-class mother’s cocaine addiction. It earned Granik and Vera Farmiga, as the mother, prizes at Sundance in 2004.

Granik said that depicting Ree’s situation was both lure and intimidation. She wanted to get it right, not just for viewers, but for the persons whose lives, even if fabricated, would blaze on the big screen.

Granik and key crew members took six trips to southwestern Missouri before the RED camera rolled. “Our job was to be note takers,’’ she said. “The woods look different there than on the East Coast. We don’t know anyone who heats their home with wood stoves.’’

She sought out local guides, including Woodrell, though she discovered that even though he had grown up a county away, he was considered an outsider.

While scouting, Granik met a local family, the Laysons, and used several of their buildings’ interiors and exteriors as is. She even used their old hound dog. “We may have added a shelf to a room or moved the refrigerator to get an angle,’’ Granik said of the sets that stood for Ree’s and neighboring homes. Otherwise, it’s the Laysons’ rusty trampoline in the yard, it’s their waterbed. Some might call the mise-en-scène junky, but Granik prefers “layered with objects.’’ The rapport with the family prompted her to revamp a script that called for a younger brother and instead cast Ashlee Thompson, the Laysons’ granddaughter, as Ree’s younger sister.

This slight gender shift, coupled with a female protagonist and a gruesome turning point executed by a boatful of women, prompted an audience member at the Berlin International Film Festival to ask if the Ozarks were a matriarchy. “I’m anxious when women behave badly, yet I want them to be fierce,’’ said Granik. And Ree embodies those dueling instincts, as she weighs her own freedom against family loyalty.

If the women in “Winter’s Bone’’ are fierce, the men are no less so. After spotting a billboard for The Biker Church (yes, a real place), Granik attended a service and couldn’t keep her eyes off Ron “Stray Dog’’ Hall. His regalia, she said, included an “intriguing mixture of cultural identifiers,’’ a clear love of motorcycles, and military service. Hall acted as a community liaison for Granik and appears in the film as the brutal patriarch Thump Milton, wearing his own clothes. In a similar effort toward authenticity, locals gave their worn clothes to the costume department in exchange for new Carhartts.

Granik found a committed collaborator in John Hawkes, who plays Ree’s uncle Teardrop, a gaunt meth addict, full of menace. The director obliged when Hawkes asked to come to set early. Because he’s never been formally trained, Hawkes said he over prepares to offset the panic he feels at the start of every role.

“There’s never enough of him,’’ Granik said of casting Hawkes. His lengthy list of supporting roles includes “The Perfect Storm’’ and “Lost,’’ as well as “Me and You and Everyone We Know’’ and “Deadwood.’’

Hawkes admires both Granik and costar Lawrence for being “story-first’’ and sees himself that way. When he realized Teardrop wouldn’t be missing an ear or have half his face burned off, as he does in the novel, he took charge of applying his own makeup.

“I wanted [Lawrence] to be scared every time she looked into my eyes,’’ he said.

Because he unknowingly worked from an outdated script, he had to ease into believing that Teardrop would play a banjo, as he does near the film’s close. At first he thought, “a guy like that shouldn’t have any artistic outlets at all,’’ but like his onscreen persona, Hawkes softened.

It probably helped that music evolved into a crucial story thread, independent of the novel or the script’s initial drafts. Granik’s research unearthed the region’s folk talents and scholars, including Marideth Sisco, who plays herself. Traditional songs provide some of the film’s few moments of reprieve.

The legends and lore of hill culture have become “rapidly disproportionate— almost hyperbole,’’ she remarked.

“It wasn’t something we manufactured, replicated, or imitated,’’ Granik said.

“As outsiders, we wouldn’t have known how.’’

Erin Trahan can be reached at erin@erintrahan.net.