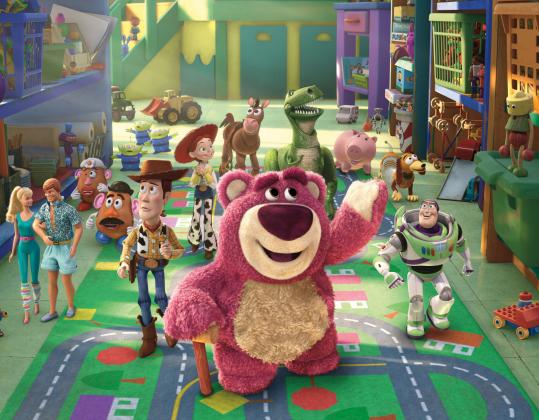 The “Toy Story’’ gang has expanded for the second sequel to include Ken (of Ken and Barbie), a teddy bear named Lotso, and a purple octopus. But cowboy Woody is still the ringleader. (Disney/Pixar)
By Glenn Lovell Globe Correspondent / June 13, 2010

EMERYVILLE, Calif. — Welcome to the house that Woody built.

If there’s any doubt that Pixar Animation Studios owes a sizable debt to the cowboy doll voiced by Tom Hanks in the “Toy Story’’ movies, it’s quickly dispelled by a tour of this sweeping glass-and-girders arcade — part artists’ colony, part entertainment complex with theater, cafeteria, and gift shop. Sure, there are oversize figures of the Incredibles and a furry blue character from “Monsters, Inc.’’ on display, as well as a trophy case full of Oscars for “Toy Story,’’ “Finding Nemo,’’ “WALL-E,’’ and “Up.’’ But it’s Sheriff Woody — returning Friday in “Toy Story 3’’ in 3-D — who occupies a place of honor. A Woody doll prototype (it resembles Fred Flintstone) is in an upstairs gallery. A Woody and Buzz Lightyear mural decorates the far wall. And, yup, Woody’s silhouette directs you to the men’s room. (Little Bo Peep’s silhouette designates “Women.’’)

“Look how devoted this place is to Woody. And why not? He put them on the map,’’ says Joan Cusack, back as “Yee-haw!’’ Jessie the can-do cowgirl. “I’m so grateful this place exists. It’s all about the magic of moviemaking. You don’t hear about that anymore; you don’t get to see it, feel it. But they’ve sure captured it here.’’

Which is why , Pixar’s owner since 2006, has flung open the gates to the 16-acre campus/studio and invited reporters to kibitz with director Lee Unkrich, his supervising animators, and the movie’s voice talent, including Cusack, John Ratzenberger (Hamm the piggy bank), Jodi Benson (Barbie), Estelle Harris (Mrs. Potato Head), and, new to the ensemble, Michael Keaton (the hopelessly un-hip Ken). The lineup of toys now also includes a deceptively folksy teddy bear named Lotso (Ned Beatty), a purple octopus (Whoopi Goldberg), and a creepy baby doll that stares at the moon. (To ensure that the copies on the shelves of your local toy store look as much like the originals as possible, Pixar has shared its design files with , Mattel, and other toy manufacturers.)

In “Toy Story 3,’’ as the toys’ owner, Andy, prepares to leave for college, Woody, Buzz, Jessie, and the rest of the gang contemplate a fate worse than the bully next door or being exiled to the attic — Sunnyside Daycare Center and its pint-size hellions.

Though it may not seem like it, the director muses, it has been 15 years since “Toy Story,’’ the first fully computer-animated feature. It has been so long, some of the kids who embraced Woody and Buzz at 6 are now part of a new generation of Pixar artists. Not surprisingly, both newbies and veterans are predicting a big opening weekend.

This certainly had something to do with Hanks, Cusack, and Keaton signing on for dubbing chores. Ratzenberger (Cliff in “Cheers’’) prides himself on being the studio’s good-luck talisman — he’s the only actor to have worked on 11 Pixar features. “I’d do carpentry around here,’’ he says, only half joking. “They call and I show up. If they needed their roses trimmed. . .’’

Cusack’s distinctive voice has made her a hero with young girls. “Jessie’s a great role model for girls because she feels things and she’s not afraid of expressing that,’’ says Cusack, whose credits include “School of Rock’’ and “Working Girl.’’ “Jessie is fun, enthusiastic, not afraid . . . a nice alternative to Barbie.’’

“Toy Story 3’’ has another distinction: It’s the Pixar film that almost didn’t get made by Pixar.

Flash back six years. The high-tech studio that prided itself on “originals’’ said no to another sequel. Disney, its distributor, reminded Pixar that it held the sequel rights to all Pixar features and, with or without their consent, would go into production on “3.’’ Pixar’s creative team was furious. Disney’s straight-to-video “Cinderella II’’ played in a continuous loop in their heads. The “contractual complications’’ were ironed out in 2006, when Disney bought Pixar for $7.4 billion in stock and assured the studio artistic autonomy.

“It was a dark time in our history,’’ acknowledges Unkrich. “We felt like our children had been taken away and were being raised by strangers.’’

“Toy Story 3,’’ the first of three upcoming Pixar sequels (“Cars 2’’ and “Monsters, Inc. 2’’ are in the wings), is bigger, longer, and more intense than its predecessors. The $200 million price tag makes it almost three times as expensive as “2.’’

“My goal was to make a film that would not make the people of the world come after me with pitchforks and torches,’’ says the 42-year-old Unkrich. “I didn’t want to be the person responsible for making a bad sequel to those movies.’’

Later, he confessed, “We all know if you put a ‘3’ after your title it means garbage. But we felt we had a good story to tell. . . . This film is the conclusion of the story of Woody and Buzz and the rest of the toys and their relationship with Andy. I feel like I’ve ended that nicely.’’

Besides the new day-care characters, “3’’ offers more photo-realistic humans, a more detailed Woody (with digitally applied nicks and scuff marks), and a more tech-savvy script, peppered with references to and IM-ing.

“We tried to make a film that’s truthful to what’s going on,’’ explains the director. “It’s illustrative of how kids now have a lot more distractions with the Internet and other things, and toys don’t hold that revered center spot in their lives . . . and of course that’s going to cause the toys anxiety.’’

What about causing preschoolers anxiety? The film’s climax takes place in a garbage-dump incinerator, with Woody and the others being sucked down, down, down into a fiery pit. Pixar’s test screenings found, curiously, that adults were more freaked out by this cliffhanger sequence than young children. Maybe this is because adults who grew up with the series are more emotionally invested.

“I think some parents are naturally protective and worried that their children are going to feel the same things they feel,’’ says Unkrich. “But kids are at a different place in their lives and worry about different things.’’

Glenn Lovell, author of “Escape Artist: The Life and Films of John Sturges,’’ can be reached at glovell@aol.com.