Caine breathes life into a killer 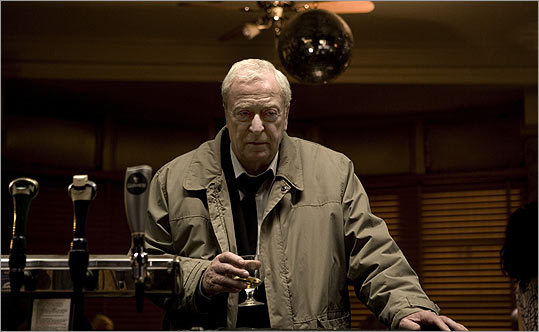 On the evidence of “Harry Brown,’’ British filmmaking is devolving. Not technically: The film’s camerawork is expert, if alarmingly grimy, and the production is all too convincing in its evocation of a time (right now) and a place (the nastier side of London). But after a long run of baroquely plotted crime dramas like “Layer Cake’’ and “Lock, Stock and Two Smoking Barrels,’’ it’s a little depressing to come across a vigilante drama whose sole twist is its protagonist’s advanced age.

In other words, director Daniel Barber’s debut film plays like a UK “Gran Torino’’ with a colder heart and retrograde sensibilities. What makes it watchable is, as always, Michael Caine. The man could read binary code and give it subtext. Playing the film’s title character, a graying ex-Royal Marine who lives in a decrepit housing estate ruled by young thugs, Caine uses stillness and those hooded lizard eyes of his to stake out the movie’s moral imperative. Harry doesn’t complain much. He just watches and, when the time is right, acts.

The movie opens with proof of the gang’s viciousness, caught on cellphone cam and nausea-inducing for several reasons. “Harry Brown’’ is brutal about crime and comeuppance and the indignities of getting old, but the brutality doesn’t have much behind it in the way of ideas. Life is dire and then you die, but it’s fun to take some of the rotters with you when you go.

When we meet Harry, he’s still behaving himself, but only because his wife is clinging to life in the hospital; when she dies, early in the movie, the gloves come off. His closest friend is an elderly ditherer played by David Bradley (your kids know him as the janitor in the “Harry Potter’’ movies) who, unlike the hero, dares to confront the bad boys head-on. Whatever Harry learned in the Royal Marines, it put a premium on surprise attack.

The unnerving high point of “Harry Brown’’ comes when the hero enters a drug den, ostensibly to buy some guns. The murky lighting and dehumanized behavior of the dealers (one of them played by Sean Harris, so creepy in the recent “Red Riding’’ trilogy) paint a convincing picture of hell; the odor of moral decay is so intense it knocks Harry temporarily off his stride. Caine, ever the pro, lets us see his character recalibrate the threat, adjust, and become more lethal than ever.

As with any “Death Wish’’ knockoff — which “Harry Brown’’ is, no matter how much it pretends otherwise — we need a few handwringers on the sidelines whining about due process. Emily Mortimer looks suitably stressed as the one police detective who thinks the old man might have some vengeance left in him, but the film’s bloody climax — aiming for apocalypse and coming up short — brings her over to her newfound savior’s side.

Caine, bless him, lets nothing in the way of emotion cross his face once Harry’s mind is made up. He’s a most efficient killing machine, one with echoes of the ice-cold killer the actor played in 1971’s “Get Carter,’’ one of Caine’s best and least-seen films. Still, “Harry Brown’’ never does the math that might add up to a larger picture of a dying generation that still knows right from wrong fighting a horde of young, spiritually dead zombies. The star’s a sly old dog but the movie hasn’t bothered to teach him any new tricks.