OK, so Russell Brand stars in this new comedy, ‘Get Him to the Greek,’ in which he plays a difficult rock star — except that the real difficulty comes when you try to interview the guy 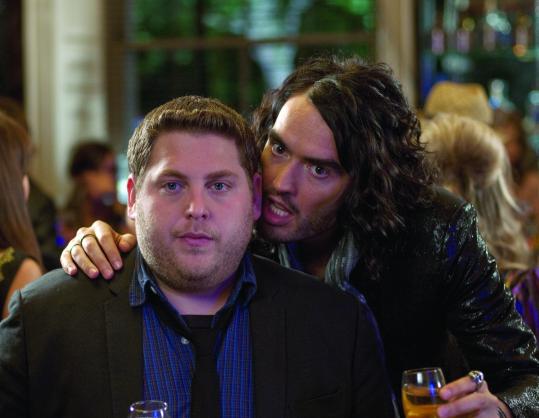 Russell Brand (right, with costar Jonah Hill) reprises his “Forgetting Sarah Marshall’’ rock star role for “Get Him to the Greek.’’ (Glen Wilson)
By Meredith Goldstein Globe Staff / May 30, 2010

It’s an old shtick — the flamboyant troublemaker who misbehaves while his straight-man sidekick flounders beside him. But it works.

Which brings us to the buddy movie “Get Him to the Greek,’’ the latest comedy produced by Judd Apatow. It opens Friday. In “Greek,’’ British comedian Russell Brand reprises his “Forgetting Sarah Marshall’’ character Aldous Snow, a womanizing rocker with one-liners aplenty, while Apatow regular Jonah Hill plays Aaron Green, an Aldous Snow super-fan-turned-record-company-peon, who’s drafted by his mogul boss (played by P. Diddy) to escort the unpredictable and untrustworthy Snow from London to Los Angeles so he can headline his own comeback show.

When the two men hook up in London, hilarity ensues, Apatow-style. The trip from one country to another includes sex, drugs, rock ’n’ roll, and an obligatory pit stop in Sin City. There’s also some vomit and toilet humor, but isn’t that to be expected?

Brand and Hill visited Boston last month to screen “Greek’’ for Northeastern University students. While they were here, the actors sat for interviews at the Liberty Hotel. Hill’s went rather smoothly. Brand’s was more of a challenge, something on a par with forcing a distracted rocker to travel from London to Los Angeles.

A. [Responding to the reporter as she fumbles with her tape recorder] You’re like some sort of calamity-ridden Bridget Jones figure. . . . You can’t work your thing . . . you’re in a rom-com. What’s your romantic life like?

A. And you bite your nails. What’s going on? Get yourself together, woman.

Q. I do write a relationship column for the Globe.

A. [Lights up] What, from your own perspective?

A. Do you think you give good advice?

A. Been in a relationship [with singer Katy Perry] for six months now. Getting married. How does one remain relaxed and calm in this situation?

Q. I don’t know. In all the tabloid photos you look pretty happy . . .

Q. You always look pretty relaxed to me.

A. I am relaxed. I was just testing you.

Q. We’re going to talk about [“Get Him to the Greek’’] even though I’m almost more interested in what you’re doing next — remaking “Arthur.’’

A. It’s Dudley Moore’s birthday today. Well, he’s dead. Do you have a birthday after you’re dead? I suppose you still do. It’s just the celebrations become a bit more macabre.

Q. Did you grow up watching “Arthur’’?

A. I maybe watched it when I was an adolescent.

A. See that’s another indication of your romantic status, because [Liza Minnelli]’s like a haphazard female Calamity Jane sort of character, isn’t she?

Q. She is. Who will play your Liza Minnelli?

A. I think just keep Liza Minnelli. If it ain’t broke, don’t fix it. She’s just had a double hip replacement. She’s hot to trot. Let’s test them out. Let’s get that pelvis working.

Q. I’m sure she would enjoy that.

A. If you’ve fallen off the horse get straight back on.

Q. Tell me about the chemistry with your partner in [“Greek’’].

A. With Jonah? It’s interesting, isn’t it? What was it like from the outside?

Q. I enjoyed it. I always like same-sex, ambiguous, too-close-friendship films.

A. What? There’s some ambiguity? Sexual ambiguity?

Q. I got home last night and “Superbad’’ was on. [Hill] is very good with hugging and loving.

Q. How long have you known him? Did you meet on “Forgetting Sarah Marshall’’?

A. Yeah. I met him at the table read for “Sarah Marshall.’’ We sort of hang out socially now that I live in Los Angeles. I know what you mean, though. He’s sort of sweet. And loving. He’s an enjoyable person to torture. [Abruptly turns to look at the promotional poster for “Get Him to the Greek’’ on the other side of the room] Do you think they’ve done something to my arm hair in that poster? It doesn’t seem like my arm hair. It’s a bit more coarse. It’s weird, isn’t it?

Q. [Laughing] Yes. . . . With your personal past with [drugs, etc.] . . . you give some depth to characters who are these troubled rock star types.

A. I was a drug addict. I’ve obviously got psychological resources to exploit for the film, and they’re happy enough to use my back catalog. When you’re with [director] Nick Stoller, and, I believe, in the Apatow stable, it’s commonplace to talk to the actors and use their personal histories when relevant. . . . They ask those sort of questions. Stuff like the smuggling and all that kind of business, I was able to provide, if you’ll excuse the pun, inside information.

Q. How has this transition been, coming to America and becoming a star here?

A. In a way, it’s quite good. It’s like going to a new school and being able to reinvent yourself a bit. It was kind of a conscious decision. I had done a lot in the UK. I had had a lot of scandals and had a lot of high-profile scandals. . . . And if you want to work in film, you can’t realistically do that anywhere else. Or Bollywood.

Q. How would you compare the tabloid cultures?

A. They’re outside the house always. For me, it’s been like that in the UK for a few years. That was one of the things I liked about not being a name here. . . . For me I cared a lot less about it when I was single, but when it’s your domestic life, you care about your privacy more.

Q. Have you been to Boston before?

A. No. I went to Lowell once when I was making a documentary about “On the Road.’’ I drove from Lowell to San Francisco. As one would have to in a car. Unless it was a time travel car. Or a car burrowed beneath the earth. Or could fly. It was none of those things.

Q. The P. Diddy scenes in the film are kind of amazing.

Q. Whenever he was in a scene, I got excited. I did not expect that.

Q. You also have a role in a new adaptation of “The Tempest’’? That’s already completed?

Q. Is Chris Cooper in that one? We like him. He’s local.

A. Yes. He’s an amazing actor. And a gentleman. He came to say goodbye even though I had only worked with him for a day. He’s impeccably polite, a gentleman of the theater.

Q. What is this version of “The Tempest’’ like? Is it very serious?

A. It’s serious. . . . I don’t think Julie Taymor is the kind of person who deals with words. I think she deals exclusively with image. She said to me, if I wanted, I could improvise my part. I said, “You do realize this was written by Shakespeare?’’ She said it was all right. She said, “I think the clown parts would have been improvised.’’

A. That is going on the list of things you’ve done that are Bridget Jones-y — took your mother to see “Date Night.’’ You bite your nails . . .

Q. I’m going to leave at the end of this interview and feel suicidal.

A. Feel optimistic. You’re very charming. You have very nice lips. I’d like to stick a pin in them.

Q. Is that a good thing?