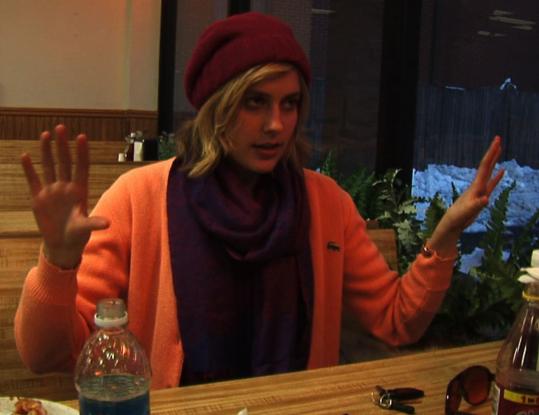 For his latest movie, the Boston-based filmmaker Rod Webber has set himself a few rules. OK, a lot of rules. His published manifesto for “Northern Comfort’’ includes “2: Principal shooting to take place in three days’’; “4: Actors must be unaware of story’’; “5: No communication between cast and crew except on breaks’’; “7: No outside lighting gear or extravagant equipment.’’ It’s DIY Dogme dedicated to Webber’s guiding maxim: “The movie already exists, it’s just waiting to be found.’’

Frankly, it’s also a lot of hot air in the service of a tiny movie that casts a tiny but genuine spell. The lone full-length feature in the Reel Fest short film festival starting today at the Somerville Theatre, “Northern Comfort’’ is a puckish road-movie meditation on loneliness and human connection. It observes two lost souls as they come together, wander through the desolate beauty of a New England winter, and part ways, colder and possibly wiser.

Horace, played by Webber, is walking to Canada. Cassandra (mumblecore queen Greta Gerwig, late of “Greenberg’’) is driving north in a car that may or may not be legally hers. He’s dressed in a suit and tie, is adorned with a hipster goatee and sheepskin hat, and listens to audiotapes of a biography of Socrates that he keeps in a briefcase. She’s distracted, possibly seriously ill. Because they’re damaged in similar ways — we learn they’re both the black sheep of their respective families — they make for sweet-and-sour traveling companions, or would if Cassandra didn’t keep disappearing on Horace.

The people they meet on the road offer varying object lessons in coping with the disaster of living. A comically mismatched couple at a roadside motel (Joseph James Bellamy and Irina Peligrad) seem ready to seduce our heroes or at least drag them into a discussion of superheroes as modern gods. A hermit (Markus Nechay) offers Horace and Cassandra beds for the night, a musical interlude, and a glimpse of one man’s sad isolation. The closest the movie gets to a statement comes from an older man in a diner (Robert Koch) who locates nirvana in the act of tying flies.

Shot on digital video in various local settings (hey, there’s Natick Pizza), “Northern Comfort’’ appears to meander as aimlessly as its central couple. Like Horace, though, it has a destination in mind and eventually gets there. The film toys with the idea of travel as philosophical limbo — of being nowhere while you’re en route to somewhere else — and also with the unknowability of other people and the necessity of trying anyway. If “Comfort’’ barely makes a mark in the snow as it passes, it leaves a gentle, firm impression nevertheless. Whether Webber’s manifesto has made a difference is unclear and probably beside the point.

Ty Burr can be reached at tburr @globe.com.