‘MacGruber’ displays flickering wit when it goofs on Reagan era 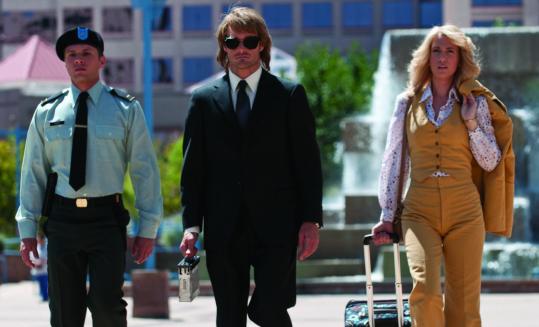 All thing considered, “MacGruber’’ is a lot better than it should be. That still doesn’t mean it’s all that great.

Based on a “Saturday Night Live’’ skit that was funny precisely twice (which in itself is about twice as funny as most “SNL’’ skits these days), the movie stars Will Forte, one of Lorne Michael’s antic, vaguely anonymous late-night comedy stars. (Is it just me, or is Forte virtually interchangeable with Bill Hader and Jason Sudeikis?)

The original skits were a genial goof on the high-80s TV series “McGyver,’’ with Forte’s resourceful, dumb action hero trapped in a warehouse and failing to disarm a nuclear warhead time after time — the man had more lives than Kenny on “South Park.’’ The movie saves that scene until the very end, delivering a long run-up that’s mostly a James Bond-style action pastiche with a touch of Rambo-itis. Imagine Austin Powers with a mullet, and you’re getting close.

Actually, some of the movie’s most reliable comedy comes from its straight men: specifically, Powers Boothe as the Pentagon colonel who brings MacGruber out of Ecuadorean exile to deal with a grave threat to national security, and Val Kilmer as that threat. The ubervillain’s name is Dieter Von Cunth, which the script has much merry fun with before moving on to less sophisticated gags.

Von Cunth has his hands on a rogue warhead and wants to use it on Washington; MacGruber has his own score to settle, having lost his wife (a ghostly Maya Rudolph) to his enemy’s bomb on their wedding day. The movie’s one long joke is that the hero is a delusional twit — wait, isn’t that the plot of every Will Ferrell movie? — but the crass dialog is given some decent top-spin by Forte’s straight-faced timing.

There’s only so much he can do, though. A bit where a desperate MacGruber offers to sexually service another character gets a shock-laugh once but not the second time. Same with a sight-gag involving a stick of celery sticking out of someone’s buttocks. But since when has an “SNL’’ project been above beating a dirty joke into the ground?

MacGruber’s team (after a first crew, all played by WWE wrestlers, has met a preposterously amusing end) is made up of the capable young Lieutenant Dixon Piper (Ryan Phillippe) and Vicki St. Elmo (Forte’s “SNL’’ cast-mate Kristen Wiig). Phillippe is called on to be heroic and wooden, and he suffices; Wiig has her best moment when the tremulously naive Vicki is asked to impersonate MacGruber at a coffee shop.

There’s also some flickering wit in the way the movie injects Reagan-era pop cheese wherever it can: a snippet of Toto’s “Rosanna’’ on the soundtrack, the Blaupunkt cassette deck the hero carries with him everywhere. MacGruber arriving at a party in a white suit that screams John Oates circa 1985 may be an easy laugh, but a laugh it is.

The never-ending weenie jokes, by contrast, are easy without being particularly funny, and the smugness that has infected so much “SNL’’ product of, oh, the last 25 years — of reasonably talented comics knowing that if they’re naughty enough they won’t have to work too hard to be hilarious — eventually overtakes “MacGruber,’’ too.

Until then, I guess, we should be thankful the movie hits about half its intended marks, a fairly high average for one of these spinoffs. Believe the hype: “MacGruber’’ actually is the best “SNL’’ movie since “Wayne’s World’’ — but only because the alternatives are “It’s Pat,’’ “A Night at the Roxbury,’’ and “The Ladies’ Man.’’

Not live from New York!