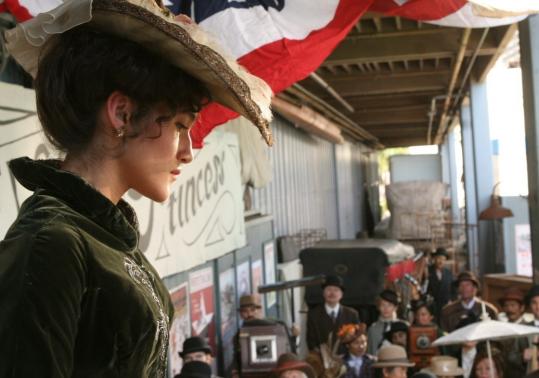 Watching “Princess Kaiulani,’’ you’re not sure whether to weep for the title character or the actress playing her.

It can’t be easy to turn the story of Hawaii’s last royal into a waxworks parade, but writer-director Marc Forby has pulled it off. The film wants us to get good and outraged over the island kingdom’s annexation at the hands of US businessmen in the 1890s, and to cheer on the exquisitely poised young woman who swayed public opinion against them. It’s difficult to get stirred up, though, when the filmmaking’s this banal.

The real Princess Ka’iulani — full name Victoria Ka’iulani Kalaninuiahilapalapa Kawekiu i Lunalilo Cleghorn — was the daughter of a native princess and the last Royal Governor of Oahu. At 13, she was sent to England to be educated for her eventual ascension to the throne, but US interests engineered the overthrow of the Hawaiian monarchy during her absence, in 1893. Ka’iulani toured the United States in support of her country, lunching with President Grover Cleveland and winning over the press with her elegance and Paris gowns, but she ultimately made little headway. Hawaii formally became a US territory in 1898.

What drama isn’t in this story, Forby and cowriter Robert Payne invent, including a young and ardent British love interest named Clive (Shaun Evans). Almost all the film’s real urgency, though, resides in the face of Q’orianka Kilcher, who plays the princess. You remember Kilcher, don’t you? The untutored Los Angeles teenager cast as Pocahontas in Terrence Malick’s brilliant, misunderstood “The New World’’? This is only the actress’s second role, and it’s depressing to think that her lot may be forever to play royal personages of color. There’s more there, even if it’s still not clear what that more might be.

Insofar as the script allows her, Kilcher plays Ka’iulani as a girl maturing into a woman and a politician, surviving racism in England and the smug jingoism of Lorrin Thurston (Barry Pepper), the main proponent of Hawaiian annexation. (By contrast, Will Patton’s Sanford B. Dole, of pineapple fame, is depicted as an eccentric supporter of the royalist cause.) The direction just kills the movie, though. Forby, a longtime producer making his behind-the-camera debut, has no idea how to choreograph a compelling scene, so he falls back on pretty cinematography and relentless fake-classical music on the soundtrack. The dialogue is in the key of Historical Inevitability — characters declaim rather than speak — and the general vibe a greeting-card version of “Masterpiece Theatre.’’ All “Princess Kaiulani’’ has going for it is its star.

Which counts. Kilcher is a stunning beauty, but not in any conventional way. She has a big, long face that is settling into dramatic planes as she gets older; at times she’s as impassive and as striking as an Easter Island statue. Elsewhere, the character’s emotions stream through the actress’s eyes, and in one remarkable scene Ka’iulani’s expression shuts down into a cruel mask as she finally understands the political game she’ll have to play. Kilcher offers a performance in search of a movie.

Maybe she was born decades too late. This is a face made for silent cinema, one to stand alongside Falconetti and Louise Brooks — unusual, dramatic, extreme. An insipid little historical epic like “Princess Kaiulani’’ can only frame it. An adventurous filmmaker might use it, and Kilcher, to go someplace unexpected. Any takers?

Written by: Forby and Robert Payne