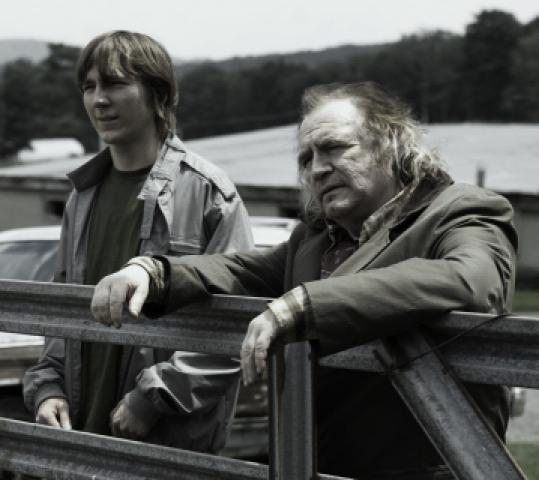 ‘The Good Heart’’ wastes no time bringing together its two main characters. Paul Dano is Lucas, a sweet-tempered homeless man who’s attempted suicide. Brian Cox is Jacques, the owner of a bar straight out of “The Iceman Cometh.’’ He’s just had his fifth heart attack. (One look at Cox’s swaying gut, and you think, “Only five?’’) They end up in adjacent hospital beds.

That’s not exactly meeting cute, but all kinds of cuteness — or such variants as affectedness, whimsy, and jaw-dropping contrivance — ensue. Icelandic writer-director Dagur Kari lets the camera do the work of making plausible a string of literary conceits that would fall flat on the page. How flat? There’s a duck named Estragon, who initiates a crucial (and truly inexcusable) plot twist — on New Year’s Eve, no less.

Jacques takes in Lucas and shows him the ropes of running a bar. They’re pretty tangled ropes. Hold down the handle on the espresso machine for 19 seconds — no more, no less. Be “familiar’’ with the customers, but never “friendly.’’ No walk-ins allowed, only regulars served. Said regulars — it’s misfit central casting — include a florist, a gigolo, a garbage man, and a descendant of Jules Verne. “By definition,’’ Jacques says, “the capacity of a bar cannot exceed 13 people. Think Jesus and his apostles.’’ (Kari is capable of real wit, but that wit does strange things to his movie’s tone.)

One rainy night a distraught woman shows up wearing a flight attendant’s uniform. When Lucas asks if she works for an airline, she tells him no. She’s dressed this way because she’s afraid of flying. Now that’s meeting cute. At least it wasn’t at an airport. The woman is played by Isild Le Besco, surely the most enchantingly named actress on IMDb.com. Soon enough, she and Lucas marry. Jacques fumes and sputters, but we can be sure his sputtering will sputter out. Or can we?

It’s easy to see the appeal of this script for Cox. Looking like a cracked-mirror version of Albert Finney and sounding like a less rumbly Michael Gambon, he rants, he grimaces, he offends, he curses (boy, does he curse), and, yes, he charms. If Jacques were any more lovable in his ogreishness he’d be Shrek.

Cox doesn’t so much chew the scenery as inhale it. Dano looks on in awe. Who can blame him? For that matter, who can blame Cox? The way the character’s written, he has no choice but to waggle-wallow for all he’s worth — and he’s worth a lot. Getting to hear the whiskey-cured leather of Cox’s voice almost justifies the movie.

As for Dano, isn’t it about time he got to use his considerable talents on a character with some strut and muscle? “There Will Be Blood’’ came closest. It’s his filmography that needs more blood. Cast him as Stonewall Jackson or Antonin Scalia or Lady Bracknell. He’s a pallid cipher as Lucas. But as with Cox shaking the superflux, that’s no fault of Dano’s. It’s how the character is, or rather isn’t, written.

Where Kari lays on the writing is with his plotting. He sets things up with the title. Advances them early on with a casual reference to organ donation when Lucas gets discharged from the hospital. Then lays it all out just before the end when the duck wanders away from the bar. Why a duck? Don’t ask. A movie that recalls bits of Eugene O’Neill and “Midnight Cowboy’’ and “A Thousand Clowns’’ and “Rain Man’’ and, in a weird way, “The Odd Couple’’ turns out to hinge on Beckett. Sort of. All along we’ve been waiting for Estragon.

THE GOOD HEART Written and directed by: Dagur Kari

Rated: R (language, a graphic operating-room scene, nasty use of a noose on a furry creature)