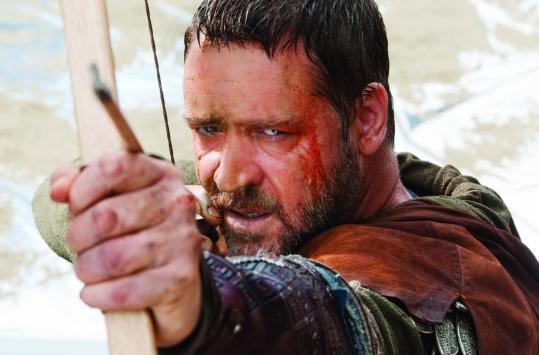 Starring action-lunk-with-acting-gravitas Russell Crowe in the title role, and an A-list supporting cast of Cate Blanchett, William Hurt, and Max von Sydow, the new “Robin Hood’’ also features a budget and production values on an epic scale. “Men in Tights,’’ Mel Brooks’s 1993 sendup, this is not.

Scott’s “Robin Hood’’ is the latest of some 50 movie and television adaptations chronicling the life and exploits of our favorite do-gooder thief — an impressive run that begins with the silent “Robin Hood and His Merry Men’’ in 1908.

You’d think viewers would be weary of another retelling of this gallant, often green-clothed folk hero who selflessly stands up for the common man. But few other stories have enjoyed such a continuous reworking as good old “RH,’’ who began appearing orally in legends, ballads, and outlaw stories around the reign of King John (1199-1216) and, in print, in “Piers Plowman’’ (circa 1377).

Despite its age, Robin Hood remains fresh and relevant. Each iteration reflects its particular times and tribulations.

“Every generation gets the Robin Hood it desires and the Robin Hood it deserves,’’ says Lorraine K. Stock, a Robin Hood expert at the University of Houston. “He’s protean. He can be whatever you want to make him.’’ And, sorry, many fans want him not to be the lightweight, listless Kevin Costner of “Robin Hood: Prince of Thieves’’ (1991) anymore.

In most versions, Robin is portrayed as a loyal follower of King Richard the Lionheart, driven to outlawry while Richard is away at the Third Crusade and his incompetent and evil brother, John, assumes the throne and drives England into social ruin. But like King Arthur, a single historical Robin Hood probably never lived. Rather, Robyn Hood, Robert Hood, and Robehod were 13th-century nicknames for those who had run afoul of the law.

So what if no real Robin Hood existed? It’s the idea that endures: this hope for a savior to restore the balance of power. Even today, he remains a powerful symbol against tyranny, injustice, and over-taxation.

“The Tea Party people will probably like this [new] movie because the tale of Robin Hood is anti-big government,’’ says Jeff Hamilton, history chair at Baylor University. “And stealing from the rich to give to the poor is an egalitarian approach.’’

Egalitarian . . . or socialist? If you believe in redistributing the wealth a little, Obama-robin is a force for good; for those who see this nation’s economic policies as troubling, not so much. But this goody two-shoes/bad-boy schizophrenia found in Robin Hood actually fits with the historical legend.

“He was not always benevolent,’’ says Stock. “He’s fierce, kills lots of people, robs from the clergy.’’ The dashing Robin Hood character doesn’t begin until the Renaissance, when he sheds his cutthroat image and becomes an outlaw with a heart of gold, dispossessed of his property and exiled to Sherwood Forest. Around this time, he also picks up his “girlfriend,’’ Maid Marian. “The Renaissance decided they couldn’t have a hero that wasn’t an aristocrat. They had to create a Robin Hood that jibed with their cultural values,’’ Stock adds.

So, too, in the movies. In the 1922 silent, stylized version with Douglas Fairbanks, the Robin character is swashbuckling for sure. But he also plays against the backdrop of two wars: the Crusades, and the Great War. “World War I has resonance with the Crusades,’’ says Stock. “The Crusades was ‘the war to end all wars.’ ’’

Likewise, in 1938, the famous Technicolor version with Errol Flynn was released on the brink of World War II. “The Adventures of Robin Hood’’ became “the most eye-popping and action-packed version of the legend,’’ according to Wheeler Winston Dixon, a professor of film studies at the University of Nebraska, Lincoln. Again Robin Hood becomes a safe way to engage with the experience of war. Robin Hood films have a habit of surfacing during major conflicts, right up to “Prince of Thieves’’ during the Gulf War, and the BBC’s three-season series (with heartthrob Jonas Armstrong) debuting shortly after the start of the Iraq War.

But for many of us, cartoons were the first exposure to the legend. Discerning viewers know that the wise-cracking Bugs Bunny shorts of the 1940s and ’50s, “Rabbit Hood’’ and “Robin Hood Daffy,’’ directed by the inimitable Chuck Jones, are far superior to the sugary, 1973 version. There’s also “Rocket Robin Hood,’’ a 1960s Canadian cartoon series co-directed by Ralph Bakshi and set in the year 3000 in outer space. And a notable live-action TV version was the 165-episode, 1955-’58 British series “The Adventures of Robin Hood,’’ starring Richard Greene, one of the first UK shows to be a hit in the US.

One harbinger of the change is the 1976 revisionist tale, “Robin and Marian,’’ starring Sean Connery and Audrey Hepburn as the couple in their sunset years. Robin is back after 20 years abroad in the Crusades, where he’s seen atrocities and seems lost in a haze of PTSD. He questions military objectives and his king. Parallels to Vietnam abound.

Another innovative rendering is the 1964 musical “Robin and the 7 Hoods,’’ a spoof on gangster films starring Frank Sinatra, Dean Martin, Sammy Davis Jr. and set in 1930s Chicago, with Sinatra as “Robbo’’ the good-hearted hoodlum. Then there’s this odd take: Terry Gilliam’s comic “Time Bandits’’ (1981) which includes a condescending Robin Hood played by John Cleese. “The poor? Oh you have to meet them,’’ he says, and hands out booty to the downtrodden just as an assistant punches them in the face.

Disenfranchisement — namely, of the Saxons, who are being replaced by the Normans as England’s ruling class — is the theme of a few Robin Hoods. In director John Irvin’s 1991 movie starring Patrick Bergin and Uma Thurman, the Normans are the invading elites and the Saxons are the lower-class peasants. Guess which side Robin fights for? That film also shows realistic bandit life in the forest; the Merry Men live like guerilla fighters in the jungle. We also see Maid Marion’s transformation from wimpy damsel in distress to plucky feminist who likens a marriage against her wishes to torture.

More than anything, the appeal of Robin Hood proves we have fairly predictable needs. In these disillusioned days of robber barons and Bernie Madoffs, authority figures take a beating. Where we are powerless, Robin Hood fights in our stead. So it makes sense that, in Ridley Scott’s newest of Hoods, Crowe doesn’t simply steal from the rich and give to the poor. He becomes a Gladiator-like national emancipator, protecting England from civil war and restoring the nation to glory once more. Taking the law into his own hands, he becomes a freedom fighter and the ruling class doesn’t like it. “Have you tried to fight a legend?’’ complains one of King John’s underlings in “Robin and Marian.’’

For these reasons, the spirit of Robin Hood endures. Perhaps more than ever, we need someone to come to the aid of the common man and woman. That’s the Robin Hood we deserve, and desire, most.

Robin Hood of past
and present