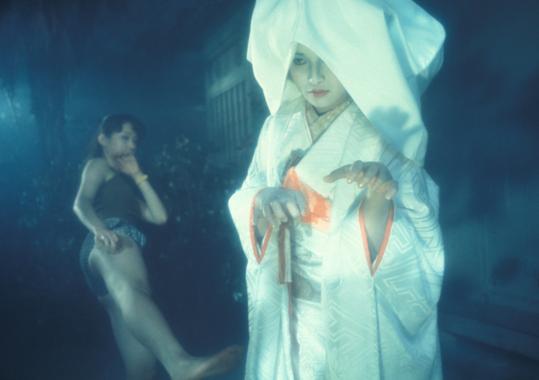 You know that a horror movie is generally aiming more to keep you laughing than to keep you up at night when a stray eyeball pops up in someone’s mouth. This was true of Sam Raimi’s gleefully demented “Evil Dead 2,’’ and it’s just as true of the 1977 Japanese import “House,’’ director Nobuhiko Obayashi’s psychedelically nonsensical feature debut.

Obayashi, who honed his freewheeling craft on experimental shorts and TV commercials, impishly gooses the look of shot after shot, putting an indelible stamp on a familiar genre tale of nubile schoolgirls in peril. The giggly gaggle centers around popular Gorgeous (Kimiko Ikegami), who’s looking forward to summer vacation with her father, but who sulkily, impulsively opts to visit a distant relative when she learns that her prospective stepmother is in the mix. Gorgeous is joined on the trip by her classmates, who similarly look and act like live-action anime characters and have handles rather than names: Fantasy (Kumiko Ohba), Kung Fu (Miki Jinbo), Prof (Ai Matsubara), Melody (Eriko Tanaka), etc.

The draggy setup is livened by trippy, stuttery edits, domestic moments shot through distorting glass-block windows, and a flashback to the World War II heartbreak of Gorgeous’s aunt (Yoko Minamida) — territory that’s silent-film ancient to the girls, and styled that way. But the real nuttiness commences when they finally meet the pale, enigmatic Auntie, a sort of kabuki Miss Havisham, whose home makes a Dalí dreamscape look coherent. Gorgeous’s new tag-along kitty starts shooting green lasers from its eyes. A piano turns carnivorous. (Melody, we hardly knew ye.) An equally hungry light fixture gobbles up Kung Fu, but her bisected lower half breaks free, launching itself across the room to keep right on kung-fu fightin’. Eventually, the house fills with a pool of thin crimson fluid that looks less like blood than fruit punch. The girls might not drink the Kool-Aid, but — fetish alert — they definitely flounder in it.

While there’s a dweeby midnight-movie inventiveness about the look of all this, there’s also an awful lot to forgive artistically (or to drunkenly roll with, as the case may be). Raimi made a name for himself with the “Evil Dead’’ films by finding workable ways of executing over-the-top effects, as did Peter Jackson with his early-career effort “Dead Alive.’’

Obayashi takes a looser approach, randomly jumbling crude prosthetics and cruder animation and composite work to capture the gonzo imagery in his head. He’s blithely, amusingly heedless of technical limitations that in some cases really ought to be stopping him for a rewrite.