The Good, the Bad, the Wierd 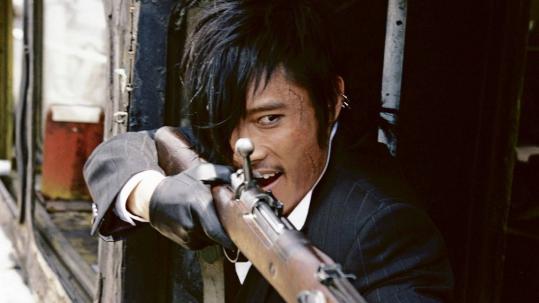 ‘The Good, the Bad, the Weird’’ is an act of Asian-Italian fusion, an entertainment that arranges cinematic leftovers in eye-popping new ways. Kim Ji-woon, yet another bad boy of South Korean filmmaking, indulges his jones for all things Sergio Leone to create an Eastern western that, unlike Akira Kurosawa’s classic samurai movies, goes for shallow pop instead of narrative depth. It’s a lot of fun before it wears you out, and it wears you out sooner than it should.

That said, it’s a kick to watch actor Song Kang-ho repurpose Eli Wallach’s Tuco — a.k.a. “The Ugly’’ — from Leone’s 1966 “The Good, the Bad, and the Ugly’’ (a movie that itself owed a lot to Kurosawa). Song’s character, a high-spirited bandit named Yoon Tae-goo, has managed to get his grubby mitts on an ancient treasure map in 1930s occupied Manchuria, but he’s only a half-step ahead of other interested parties: the invading Japanese Army, a rival gang known as the Ghost Market Thugs, and icy killer Park Chang-yi (Lee Byung-hun), who’s working (at least temporarily) for a Korean Mr. Big and whom you can call “The Bad.’’ With his slicked-down bangs and lethal stare, Lee appears to have just stepped over from one of Korea’s many high-speed gangster movies.

Working the fringes of the action is Park Do-won (Jung Woo-sung), a.k.a. “The Good,’’ a bounty hunter with a lean grace that approaches classic Eastwood without actually getting there. (Park’s fine, but, honestly, Clint could have him for breakfast.) It takes a while to sort out all these characters, if only because the filmmakers are enjoying themselves so much. Sixteen minutes in and we’re already rocketing through a frenzied train robbery in which half the characters die before we’ve had a chance to process who they are.

Despite the setting, Kim’s not interested in politics or history, and while there’s a little talk of Korean self-determination, that’s mostly a shell game. The gag here is to put everyone in cowboy hats, cue up the sub-Morricone score (which includes snippets of Korean pop and other elements), and send them out for hair-raising action sequences on the vast Gobi plains. The finale, in which all the characters converge in the desert on foot, motorcycle, horseback, and by car, is a splendid piece of action choreography, but by then you may be too played out to play along.

What’s missing is the mythic weight Leone and other filmmakers gave their pop epics — the sense of larger-than-life icons battling it out in primeval surroundings. By contrast, “The Good, the Bad, the Weird’’ is a cartoon of a cartoon. The film is reportedly the most expensive South Korean production to date, and the money’s certainly up there on the screen. Curiously, it doesn’t stick. An hour later, you’re hungry for “A Fistful of Dollars.’’

THE GOOD, THE BAD, THE WEIRD Directed by: Kim Ji-woon

In Korean, Mandarin, and Japanese, with subtitles