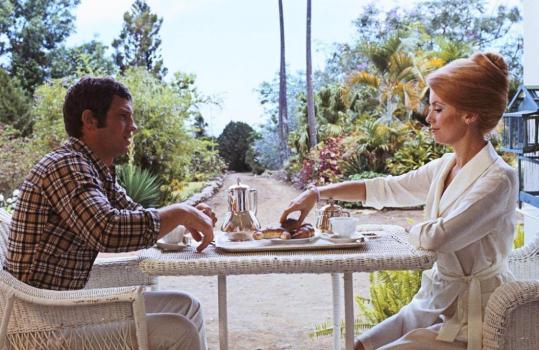 ‘Mississippi Mermaid’’ has never had an easy time of it. François Truffaut’s ode to shady ladies and l’amour fou received mixed to negative reviews when it was released in 1969, in part because critics and audiences expected romantic Gallic sensitivity from the director of “The 400 Blows’’ and “Jules and Jim.’’ It’s there, all right — just buried under genre games both subtle and muddled. The film pops up today for a brief run at the Museum of Fine Arts in a version 13 minutes longer than the original US release; it’s worth seeing if you love both Truffaut and the older filmmakers through whom he tried to make sense of the world.

“Mississippi’’ is a film noir shot in dazzling color, a Hitchcock movie with the soul of a Jean Renoir drama. The latter is this movie’s dedicatee, and his humane vision of the animal that is man is very much in evidence. Yet all we see for a while are Hitch and crime novelist Cornell Woolrich, whose 1947 “Waltz Into Darkness’’ serves as the film’s source. Jean-Paul Belmondo plays Louis, a French plantation owner on the African island of Reunion, who sends off for a mail-order bride; she arrives in the stunning person of Julie (Catherine Deneuve), so it almost doesn’t matter that she looks nothing like the photo that preceded her.

The key word is “almost.’’ Louis is besotted with his new wife — it’s Deneuve, so you can’t blame him — and only slowly comes to suspect she’s not who she says. (A less romantic man might have raised the alarm when the ring doesn’t fit his bride’s finger at the wedding ceremony.) For half its running time, “Mississippi Mermaid’’ toys with the iconography of Hollywood suspense in general and Hitchcock movies in particular: a bird in a gilded cage, a heroine whose murky criminality and hairdo evoke Tippi Hedren in “Marnie.’’

When “Julie’s’’ game finally becomes apparent, though, the movie shifts into a slower, more emotionally raw gear, as Louis’s devotion to his bride knows no legal or criminal bounds. Where another filmmaker might play the character as a masochistic sap, Truffaut sees a beautiful fool, and the movie is most touching (and occasionally silly) when Deneuve’s character recognizes it, too. Renoir famously said that everyone has their reasons, and Truffaut’s codicil here is that all those reasons rise from the ache to connect.

That message plays out more awkwardly than it should, especially when compared with the director’s earlier “Shoot the Piano Player,’’ another mix-and-match noir. Here, Truffaut jams genres together with little concern whether they’ll mesh, and at times he seems to be aping the Cubist lovers-on-the-run vibe of “Pierrot le Fou,’’ his French New Wave colleague Jean-Luc Godard’s 1965 masterpiece.

Truffaut wasn’t a stylistic high-wire artist like Godard, though. The best parts of “Mississippi Mermaid’’ are the emotions that well up through the tortured plotting and that slowly thaw the chilly Deneuve into human warmth. For this filmmaker, loneliness was the greatest crime of all.

Written by: Truffaut, based on a novel by “William Irish’’ (Cornell Woolrich)

At: MFA, today and various dates through May 2