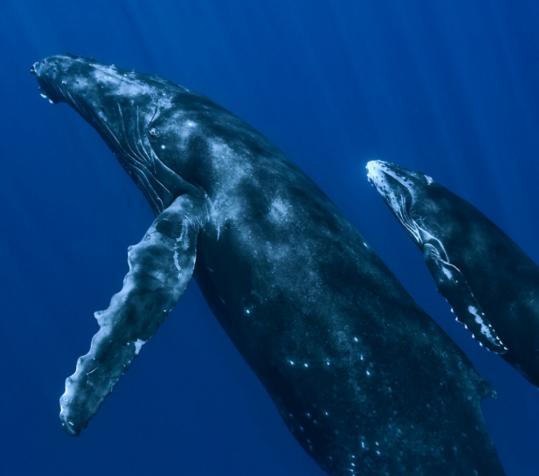 It’s not unfair to enter “Oceans’’ prepared for George Clooney and Brad Pitt to rob a casino. That, of course, would be a mistake. But what the title of Disneynature’s documentary lacks in a possessive apostrophe it makes up for with handsome images that testify to the persistence of aquatic life. It settles almost nothing else. “What is the ocean?’’ asks Pierce Brosnan in narration that smells of existential ponderousness and cognac.

The shots of horseshoe crabs and an iguana are clearer than the answer. The ocean is “vast,’’ “ancient,’’ and “alive.’’ It is also apparently an enormous aquarium. The movie is, so to speak, a bait and switch. Come for the oceans. Stay for the critters. Despite that title, it’s never entirely clear what body of water we’re beholding. We head to the “beaches of South America’’ just in time to see orcas snatch sea lions for lunch and to Alaska where humpback whales form a floating, fleeting mountain range. But the water itself is afterthought. It’s more like, “The Stuff in Oceans.’’

The directors Jacques Perrin and Jacques Cluzaud previously brought us the itinerant birds of “Winged Migration.’’ And they’re well equipped to bring us as close as we can get to moray eels, razorfish, shad, and narwhals — the corndogs of the sea — without the aid of scuba gear or plastic glasses. Glorious sequences come easily for them, particularly anything involving feeding: gulls dive-bombing into shimmering curtains of sardines, fur seals just missing the trap-jaws of a great white. Who knew the line between war and dinner was so fine?

When an iguana appears to be staring in bewilderment at a freshly launched rocket ship burning up, up and away, the movie seems, in the early going, headed toward a decent analogy between astronautics and sea exploration. Why fly there, the iguana seems to wonder, when there’s all this unexplored territory down here?

Perrin and Cluzaud, like the fine aquatic filmmaker Jean Painlevé, adore their non-human subjects. But they seem to be working with an imperative to deliver a wildlife sampler, heavy on the violence, light on affection (no sex, please, we’re ). Their shots are all spectacular, but their point is vague. Unlike in “Winged Migration,’’ the majestic imagery fails to tell a story or advance a message.

With 25 minutes left, dire ecological warnings ebb and flow. They suggest that “Oceans’’ might once have been meant as a beauteous screed but was whittled down to fit among other palatable marine-life entertainments (“Under the Sea 3D,’’ “Aliens of the Deep,’’ Discovery’s “Life’’ series, and “Deep Blue,’’ which Brosnan also narrated). How else to explain some of the thematic holes? “There are still places where the sea is clean and clear,’’ Brosnan says. But he hasn’t told us it was dirty.

Subsequent satellite images reveal streams of pollution, and we see creatures swimming among shopping carts. “Human indifference is surely the ocean’s greatest threat,’’ continues Brosnan. But before we can say “mercy, mercy me,’’ it’s off to the cute leopard seals and waddling penguins of the Antarctic. You’re torn. Is this a work of nature pornography or consciousness raising? The movie thinks if it overwhelms us with the former, we won’t notice the relative absence of the latter. Even at Disneynature, the truth remains inconvenient.