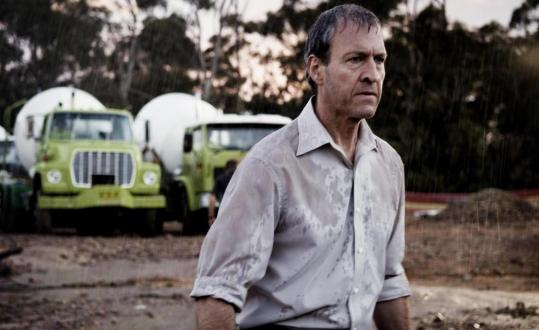 David Roberts is a construction foreman involved in adultery and arson in “The Square.’’ (Apparition Films via Associated Press)
By Wesley Morris Globe Staff / April 16, 2010

Nash Edgerton’s “The Square’’ couldn’t be farther away from the American South — it’s set in a small Australian town. But tales of two besotted adulterers and a bag of money know no location. The surprise here is how thrillingly bad things get, all because Ray (David Roberts) and Carla (Claire van der Boom) want to ditch their respective spouses and run off together. She’s prone to saying things like “We wouldn’t be hurting anybody,’’ which, given the film’s eventual body count, suggests a lack of appreciation for what she’s gotten herself into.

Edgerton’s actor brother Joel wrote the script with Matthew Dabner, and they establish the tension rather immediately, lodging their film in a particularly intimidating workman’s landscape. Everybody dirties their hands for a living. Carla’s husband, Smithy (Anthony Hayes), owns a tow business with his friends. And most of the film is set at the construction site (the movie title comes from the building underway) where Ray is the foreman and has just begun receiving kickbacks from a contractor.

It’s amazing how a man cheating on his wife and about to skip town with his mistress can also bear the stress of professional corruption. But Ray’s shoulders are broad. Soon, at Carla’s urging, he’s hiring an arsonist (Joel Edgerton) to torch her house and trying to decipher the author of the “I know what you did’’ cards Ray’s been receiving. By that point he has done so much it’s hard to know what exactly his accuser knows. But all the missing people and mounting mysteries have given the heretofore sleepy police department a new lease on life.

This movie likes to wink. “I’m studying cubism at the moment,’’ someone says. And when Carla asks Smithy what happened to his hand, he tells her, “A little bit of mischief.’’ And the fate of the couple follows the fate of their mutually smitten dogs. Jesting aside, these are filmmakers who take the craft of suspense quite seriously. The desperation and mounting sense of dread are authentic. But they have their boundaries. Babies are nonnegotiable. Thank God, someone is safe. But perhaps revising Brian De Palma’s riff on Sergei Eisenstein in the train station shootout in “The Untouchables,’’ Edgerton uses a crying baby as a punch line for his action sequence, not its spine.

The rest of “The Square’’ calls to mind the skin-tight dread of the Coen brothers’ “Blood Simple.’’ If that movie remains the more rigorous cinematic achievement, “The Square’’ is a more richly ironic pleasure. Rarely has good luck been as indistinguishable from bad. The Coens were also making a horror movie devoted to what would become their trademark mockery of stupid people. “The Square,’’ while scarcely less civilized, is a touch nicer. There aren’t many stupid people here, just a lot of foolish choices.

THE SQUARE Directed by: Nash Edgerton