The Secret in Their Eyes

Oscar winner truly is a mystery 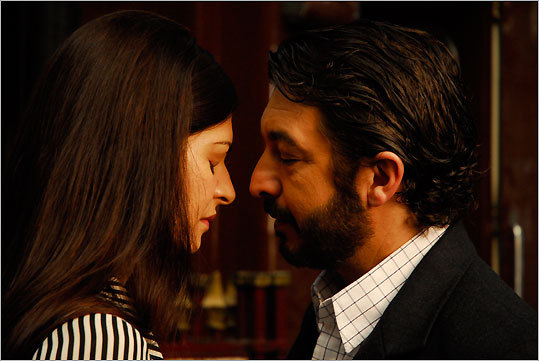 That Argentina’s “The Secret in Their Eyes’’ was the shock foreign-language Oscar winner last month says more about the meekness of Academy voters than it does about the ultimate quality of the film. Apparently, there’s no underestimating the appeal of romantic drama crossed with the criminal-investigation thriller. Can’t you see it? “Law & Order: Heartbreak Zone.’’

The plot hinges on a young Buenos Aires woman’s murder in 1974 and a middle-aged man’s determination to find her killer. The man is Benjamin Esposito (Ricardo Darín), now a retired criminal justice employee in 1999 trying to write a novel. His attempts to unpack his misty memories of unsettled love and unsolved mysteries lead him back to his old boss, Irene Menéndez-Hastings (Soledad Villamil), a fancy American-educated lawyer who is, as they say, out of his league.

Flashbacks return us to Irene’s first days on the job, when she was, well — she had longer hair. Esposito’s beard was a lot darker, too — it’s the only way to make the intensely captivating, but incurably middle-aged Darín seem 35. “The Secret in Their Eyes’’ is guilty of many things. Peeling old-age makeup and dubious hair dye are among the more preventable offenses.

But back and forth we go, following the younger Esposito and his outrageous co-worker Sandoval (the comedian Guillermo Francella) as they break into apartments and chase suspects in the name of cracking the case. Argentina’s political upheavals of the 1960s and ’70s — coups, juntas, corruption — simmer in the background, but they seem trivial alongside all the heart-shaped business at the forefront. Meanwhile, the older Esposito pecks away on the typewriter that Irene has given him, despite her skepticism that his book can produce justice. One of the machine’s keys doesn’t work for reasons that the movie explains in a pivotal (and absurd) 11th hour blast of revelation.

Juan José Campanella directed and adapted the film from Eduardo Sacheri’s novel. Campanella spends a lot of time in Los Angeles, where he’s made features in English (perhaps you caught the Denis Leary thriller “Love Walked In’’) and directs episodes of “House’’ and, yes, “Law & Order: Special Victims Unit.’’ This is to say that he knows his way around trashy entertainment. After Esposito and Sandoval chase down and nab a suspect, the seemingly demure Irene uses insulting vulgarity to bring him to an incriminating boil. The suspect is vile. And yet her ploy is the sort of shameless tactic that even crypto-feminist Detective Benson of “SVU’’ might have to think twice about. The camera’s fondness, in “The Secret,’’ for lingering over a dead woman’s naked corpse might also give her pause.

Campanella oversees a terrific single-take sequence that begins as a helicopter shot entering El Monumental soccer stadium and becomes a hand-held chase sequence that wends through the stands and beneath them and concludes down on the field. But he so loves the sensationalism of this story that he doesn’t care how basely it’s presented. The images of that naked body, for instance, are paired with lush music. The score strikes again right after Irene gets her triumphant confession. And perhaps the scene immediately following a suicide is not the best time to trot out your hoariest love cliches, which include but are hardly limited to one dewy-eyed character chasing the departing train of another. Do cry for them, Argentina!

When developments take a turn for the grisly, the movie takes a proud turn for the mawkish. This might have worked as a kind of romance or a political thriller, but, unlike, say, “The Girl With the Dragon Tattoo,’’ it hardly succeeds as both. The secret here is that the movie is rather tasteless. It has the high, slightly nauseating stink of perfume on garbage.

THE SECRET IN THEIR EYES Written and directed by: Juan José Campanella