Can an unhappy guy become the weight-loss king of Queens? 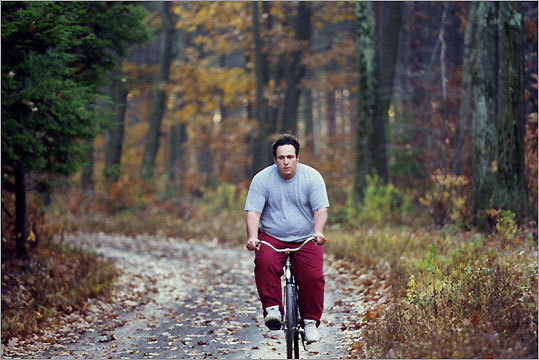 Carmine Famiglietti stars as a Queens man with heart trouble who heads to the New York hinterlands after disappointing his family by backsliding on his diet.
By Wesley Morris Globe Staff / April 9, 2010

‘Lbs.’’ is an obesity dramedy that starts out as a scrappy little movie about an Italian-American guy from Queens. His name is Neil (Carmine Famiglietti) and he hates that he likes to eat so much. Neil’s weight hovers in the 300-pound area. He wears his curly hair in a tacky, gelled-up crown. He waddles around the neighborhood like a man in his final trimester. The Overeaters Anonymous meetings don’t appear to work.

Famiglietti wrote the movie with Matthew Bonifacio, who directed it, and it’s clear just in the way that he allows himself to be filmed jiggling and stuffing his face that Neil will find a way to stop. This parade of girth is as much a vanity as Matthew McConaughey’s chronic shirtlessness. McConaughey is killing us. Neil, however, is killing himself. The movie seems to exist in order to save both him and the man playing him.

After heart problems land Neil in the hospital, his older sister, Theresa (Sharon Angela), sympathetically postpones her big fantasy wedding, which is days away, to help her brother get better. She winds up with a cheaper disaster; it’s at her parents’ house, and it pours. During the reception, there’s an excellent scene in which Theresa’s husband (Lou Martini), full of alcohol, lets Neil have it. He’s been cheating on his diet. A fight erupts and Theresa’s heart breaks. She made a sacrifice. Why couldn’t Neil?

The first 40 minutes have authentic simplicity. The Queens neighborhood feels like the small town that certain parts of New York City sometimes do. The guy who owns Neil’s pizzeria of choice is scared Neil’s parents will find that he served him. The actors who surround Famiglietti play vibrant characters, especially Sharon Angela, who will forever be Rosalie Aprile, Carmela Soprano’s tragedy-bound best friend. You don’t appreciate the high style of that show until you see its stars in other contexts. If Ro, with her tired eyes and moribund rasp, is all you know of Angela, the youth in her face is a shock. She was only made to seem ancient. The relentless music score and indifferent photography are mediocre, but she’s wonderful. So are Michael Aronov, who plays Sacco, Neil’s charismatic, cheeseball, junkie best friend; the natural vibrancy of Queens; and the knack for finding subtle complexities among these relationships.

So it’s disappointing when the fiasco at the wedding prompts Neil to drive into the New York hinterlands. The goal is to lose weight while Sacco, who joins him, kicks drugs. At a low moment of mutual withdrawal, they argue about who’s worse off, a drug addict or an overeater. But the movie turns into a psychodrama about which addiction is easier to overcome.

The trip inland does produce the fine Miriam Shor as a soon-to-be-divorced waitress. But “Lbs.’’ becomes an unworkable combination: the sort of generic, bucolic independent movie that the Sundance Film Festival cultivates and a tale of personal redemption that Hollywood prefers. The movie builds up to its big reveal, shooting Famiglietti from obscure angles so we can’t see his new body or face until he makes his homecoming. It’s not a completely happy or sensitive return. We deduce, for instance, that drug addicts might actually have it harder.

It’s suggested that Neil’s mother is to blame for his weight (without him, she goes through her own withdrawal). From an ethnic standpoint, that’s heresy. But anyone who’s seen the maternal force-feeding in “Precious’’ knows it’s also worth exploring. “Lbs.’’ turns into a complacent cri-de-coeur for the otherwise affable Famiglietti, not unlike “Fatso,’’ with Dom DeLuise, and “Phat Girlz,’’ with Mo’Nique. It’s a movie about purging the shame of being overweight, if not the weight itself.

That “Lbs.’’ has been languishing since 2004 without proper distribution means that someone wasn’t paying attention to how fertile the culture is for struggles over weight — whether to shed it and how. “The Biggest Loser’’ is a hit for NBC. Kirstie Alley continues her televised crisis over the supposed hilarity of her fatness. “Dance Your Ass Off ’’ is an actual TV program. And after the Oscars there was lively discourse about whether best actress nominee Gabourey Sidibe will ever get good roles at her current plus size.

The movie Bonifacio and Famiglietti have made is much better as a bittersweet family portrait. But those in search of a mirror for their own weight issues will find a deluxe one here.

Written by: Bonifacio and Carmine Famiglietti

Unrated (some language and a lot of eating)