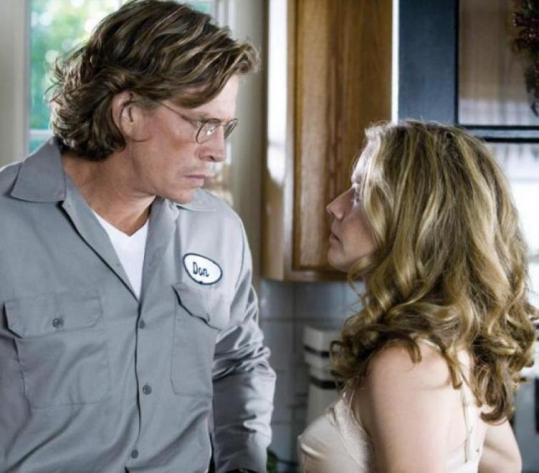 ‘Don McKay’’ is a sorry excuse for a film noir. A sad sack Boston janitor named Don (Thomas Haden Church) gets a letter from Sonny (Elisabeth Shue), a high school girlfriend he hasn’t seen in 25 years. She says she’s dying and wants to spend her last days with him in Andover (or thereabouts). Her sexed-up drawl and silky nightgown suggest her disease might be delusions of Tennessee Williams. Why Don would go along with this is but one of this movie’s many mysteries. Because it needs to get off the ground, he has to comply.

This is a movie that, if you can make it to the last 30 minutes, starts to make some sense. It seems the plot twist is the only good idea in the script. To get there, however, requires Don to be pretty dumb and us to be dumber. He winds up killing someone then telling an estranged friend (Keith David), who curses Don out then helps him look for the body. When Don asks a good question of Sonny and gets a suspicious answer, he still can’t bring himself to stay gone.

Jake Goldberger wrote and directed this movie, his first. Clearly, he was going for film noir (Shue is obviously up to something), but the sense of control and tension you’d need for noir elude him. So do the skills for other genres. He doesn’t seem to know whether he’s making a romance, a thriller, or a farce. The actors, taking full advantage of Goldberger’s bald amateurism, usually play all three. Thank God. Shue is willfully funny. Her hard beauty and adolescent diction make sense in a throwaway movie like this. Plus, she’s having a good time, dragging you along with her.

If nothing else, this movie reminds us that there’s still a need for her services. She’s part of a growing list of severely underemployed women over 35 who could breathe some life into the junk rolling off the Hollywood assembly line. The only person in “Don McKay’’ having a better time than Shue is Melissa Leo, who plays Sonny’s insinuating housemate. She’s too much by half, in an Agnes Moorehead sort of way. But how interesting to see a performer, who puts so much care and thought into creating her characters, just show up and say, “Whaddya got?’’ By the movie’s entertainingly absurd climax, she and Shue hit their stride, namely by hitting each other. It’s not much at all, but it’s something.