‘The Sun’ sheds light on Hirohito 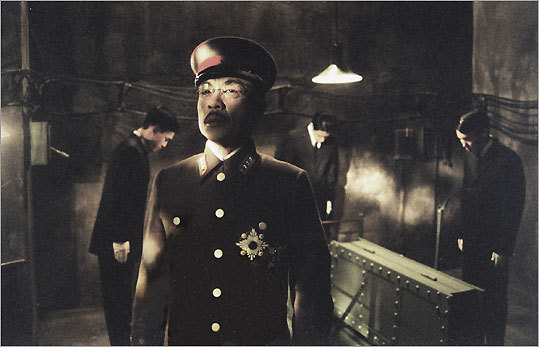 Issey Ogata is an eccentric Emperor Hirohito at the end of World War II.
By Wesley Morris Globe Staff / March 31, 2010

Aleksandr Sokurov’s “The Sun’’ doesn’t officially qualify as an aquatic movie. It’s set mostly beneath the Imperial Palace whose cavernous, elaborately furnished basement the government used as a bunker to shelter Emperor Hirohito at end of the war. But the narrow corridors, seemingly tiny rooms, and peeks of iron girding suggest the guts of a giant submarine or the bowels of a ship.

Look at Hirohito (Issey Ogata). He’s puckering his mouth, right? After a few scenes, and then for the duration of this mesmerizing dissection of a movie, doesn’t that puckering start to resemble a fish casually desperate for water? His own daydreams are infernal visions of tailed fish dropping fish bombs over a city the way any B-29 might? The land here might be dry but the psyche is soaking wet.

In a cycle of movies, Sokurov has been assaying the power myths of dictators. 1999’s “Moloch’’ was about Hitler. 2001’s “Taurus ’’ picked at Lenin. “The Sun,’’ which was completed and shown at festivals five years ago, is the most thrillingly bizarre of the director’s abstractions, staged at the junctures of reason and insanity, fact and fantasia. Hirohito was obsessed with Western culture. Sokurov’s version kisses a scrapbook of Hollywood headshots and dresses enough like a certain silent-comedy star for the American and British photographers, who get a rare glimpse of Hirohito, to call him Charlie.

This emperor verges on dementia, having no apparent clue how to function. His servants dress and lead him around the bunker. To their consternation, he needs reminding of his divinity. To their embarrassment and shock, the man the Japanese called “Tenno’’ (as in “Heavenly Emperor’’) seems fully committed to asserting that he’s not the living embodiment of all Japanese people but one man — a really weird, really sheltered man who thinks his breath stinks.

His authority is clear, but his majesty is canted. Never more so than in his dealings with Douglas MacArthur (Robert Dawson), the tall, brash American general, who invites Hirohito to his quarters for a dinner to discuss how to proceed with Japan’s surrender to the Allied forces. The men’s incongruous approaches to power are as evident as the discrepancy in their heights. MacArthur has an approach. Hirohito retreats. Sokurov stages their encounter as a kind of bad date. As the emperor prattles on about one thing or another, the American abruptly announces that he has to leave for a minute, during which he presumably calls the president from the bathroom and says, “I can’t believe you set me up with this guy!’’

Working from Yuri Arabov and Jeremy Noble’s script, Sokurov has a wonderful time not simply with Hirohito and history, but with his filmmaking, which can be oblique to the point of being stultifying. Here he plays with scale. A room that’s been shot to seem intimate is suddenly, with a new camera angle, much bigger and colder. He also achieves subdued screwball comedy — the rickety old servant who appears ready to pass out, the young man scribbling notes for Hirohito who actually does, the shvitzing, horrified-looking men of Hirohito’s cabinet. The movie also looks gorgeous, photographed in shades of gun-metal and tea. The just-audible tuning blips and bleats of an unseen transmitter constitute a state of mind.

Ogata is a physical marvel. Who knew there were so many ways to play introverted and eccentric. Making literal the emperor’s fascination with taxidermy and marine biology, he grimaces and nods and sends his lips in and out, gently sucking for air. This is a leader who seems both imported from another universe and body snatched. In Ogata’s interpretation, Hirohito’s assertions of humanness look very much like a man giving a new life form a spin.

Ambiguity defines Hirohito’s legacy. Was he a passive wartime leader, like his feeble, sickly father, or did he have a hand in the government’s deadly military strategies? Both history and Sokurov offer some combination of the two. The news that Americans are marching through Tokyo excites Hirohito far less than slipping on a lab coat and sympathetically examining a crab beneath a microscope. Like recognizes like.

At: the Museum of Fine Arts