A (slightly) dramatic turn for Cyrus 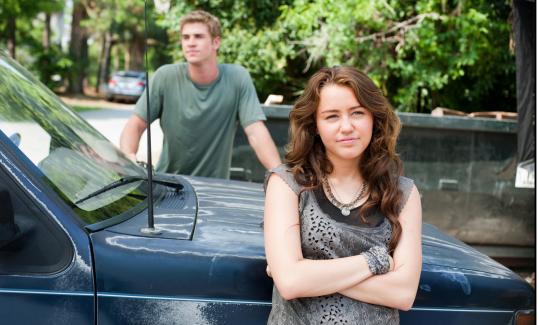 Can nothing break Miley Cyrus’s grip on our hearts? Last year, she confessed that the love expressed for Jay-Z on her hit single “Party in the U.S.A. ’’ was fraudulent. Yet we continued — to quote the song — moving our hips like yeah. When her tutorials with “American Idol’’ contestants produced some of the worst live singing since the previous week, enthusiasm for her new movie marched on.

“The Last Song,’’ based on a Nicholas Sparks novel that Sparks co-adapted, improves negligibly over “Hannah Montana the Movie,’’ in which Cyrus wrestled with whether or not to bite the Hannah that feeds her. This time the waggily arms, bug eyes, and synthetic truculence suggest that you can take the girl out of Montana but you can’t take the Montana out of the girl. She plays Ronnie, a sullen 17-year-old New Yorker dropped off for the summer at the quaint North Carolina beach house of her composer father (Greg Kinnear). Her younger brother (the mercilessly spunky Bobby Coleman) goes with her.

Ronnie never misses an opportunity to make dad feel bad for splitting up with her mom (Kelly Preston). She’s so spiteful that she hasn’t touched a piano in years and refuses to attend Juilliard, which has accepted her on the basis of her reputation. Presumably, the admissions officers moved their hips like yeah. But a kiss from a boy allows her to drop the moody-teen act. Will (Liam Hemsworth) plays beach volleyball. He carries 1 percent body fat. He fixes cars at the local garage. He saves turtles with the wildlife rescue. He’s rich. And he, too, might be in New York for college.

Their romance is touch-and-go. An ex-girlfriend of Will’s tries to make Ronnie jealous. His family’s snobbery grates. He withholds too much crucial information for too long. A normal girl would be able to reason past all this. A normal boy would quit while he’s ahead. But Will is anything but normal. It’s true that he has the generic American handsomeness of Paul Walker and Channing Tatum, but with the fuller lips and nose of Tyrese Gibson. From a distance he looks like John Krasinski. Shockingly, Hemsworth is Australian. Unlike a lot of non-American actors who play Americans, he sounds like he comes from somewhere other than the classroom of a dialect coach. So what if that somewhere is behind the register at ? I at least know where that is.

The director, Julie Anne Robinson, makes sure that any scene that might culminate in thought or reflection instead becomes a montage set to music. In 90 seconds, Will fights at a wedding, hatchling sea turtles waddle to the ocean, and a character has a sudden collapse. Sparks is not a man of discretion. Even a passing familiarity with his books leads you to believe he’s a maudlin death panelist. “The Last Song’’ is as blunt a title as “Hot Tub Time Machine.’’ Whose song it is you’ll have to see for yourself. But the finale reveals that its author must have been thinking about the shower scene in a work of soft-core pornography.

In ritualizing death, Sparks, whose formula of beaches and bad news runs aground here, crosses over into bathetic profanity. His characters die because it’s all he can think to have them do. This is the sort of petty, recriminating movie that has to punish its characters’ bad attitudes by making them sit at bedsides or cater at fancy weddings. (One girl, on the verge of homelessness, could buy herself a month of shelter simply by putting her $500 sandals on .)

A more convincing star could make this a degree more tolerable, although in Cyrus’s defense not much more. She’s cute whether she’s smiling, crying, or wearing a pretty lavender dress. It’d be nice to see her do some acting, but that doesn’t appear to be high on the movie’s list of priorities. Allegedly, this is the film in which Cyrus gets all, like, dramatic. If by “dramatic’’ one means pouty, sullen, and cute, then OK. But it’s not tragedy you sense behind those big brown eyes. It’s a party in the USA.

At: Regal Fenway and suburbs