Mix of farce and realism served in ‘Mid-August Lunch’ 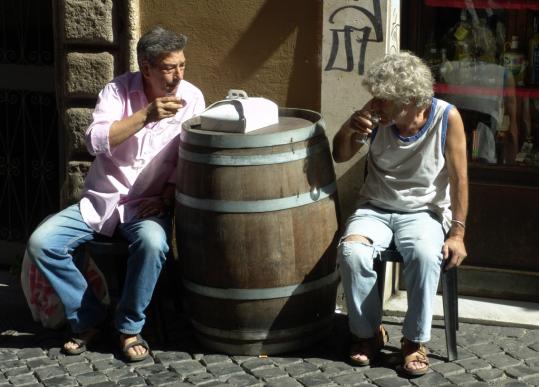 How’s this for a pickle? You’re a 50ish bachelor who still lives with his mother (so, yes, you live in Italy). You’re behind on condo fees, and, apparently, you haven’t paid the electricity bill in three years. Tired of harassing you, the property manager suggests a deal. He wants desperately to go away with a woman friend during Italy’s biggest holiday weekend. So, please (please), take his mother for a few days, and, for now, he’ll let the whole thing go.

Saying no means more stress and a much less funny “Mid-August Lunch,’’ the darling apartment comedy that opens today at the Kendall. Directed, written by, and starring Gianni Di Gregorio as the unmarried, haggardly handsome Gianni (think Robert Mitchum with even less sleep), the movie is a perfect blend of calm execution and uninflected farce.

The first thing we see is the middle-aged son reading “The Three Musketeers’’ at the bedside of his mother (Valeria De Franciscis). As the camera studies the moles and liver spots that wall-paper her arm, she begs Gianni to skip back to the parts that describe whether D’Artagnan was hot. A beaked nose? Eh. This proceeds until she passes out.

These two share a large, gorgeous flat in Rome’s vibrant Trastevere neighborhood. And their relative penury puts them in the company of certain families in Jane Austen and Henry James books: the house poor. But Gianni’s mother keeps up her personal movie-star appearance. De Franciscis could be 89. She could be 206. But she cleans up nicely. Her lips are painted red. Her deep tan should be considered a legitimate solar energy source. And that full, golden hair is the stuff typically reserved for maidens in Renaissance frescoes. Hers is an ancient yet effulgent glamour, and it clashes with the two plainer women who arrive at her home.

Did I say two? Well, the property manager’s mother (Marina Cacciotti) has a sister (Maria Calì), whom he also drops off before making an abrupt exit. Even as Gianni finds himself transporting a television set back and forth between rooms like an innkeeper in a screwball play, his patience proves comically durable. Not even extra mouths to feed really rile him. It would do no good to spoil the tiny surprises in this 75-minute film. But let’s just say Gianni also can’t afford to pay his doctor, who’d also like to hit the road for the weekend.

Di Gregorio co-wrote the great crime epic “Gomorrah,’’ and his new movie shares that one’s deceptive realism. You don’t entirely know that you’re not watching a documentary. The old ladies are each marvels of understatement, particularly Grazia Cesarini Sforza, whose evident grace belies an alarming capacity to shove a plate of prosciutto in her mouth. None of these women appears to know a camera is watching them — or rather, they don’t seem to care. When Gianni serves one mother with a dietary restriction a plate of politely sautéed vegetables, her tablemate looks on with a straight-faced horror that says: I’ll wait for the macaroni casserole, thanks.

In so many ways this is a movie about food and dining. Gianni takes vivid pleasure in cooking. The wall of copper pots and pans in his kitchen belongs in a museum. He’s just multiplying the work and expense of what he does daily for his mother. The meals and their preparation bring out different elements of the women and how they cook and eat. These are simple relationships — between people and their food. But how telling and elemental they are! In a sweet if territorial move, one woman even brings over a trophy she won for the most delicious baked pasta in her town.

The farce here stems not from Gianni’s living arrangement but from how it’s compounded. Lots of Italian men still live at home with mamma being a surrogate wife. The joke is that the mothers can’t survive without a son. These women need a baby sitter.

You can imagine a balder, probably more American movie turning up the heat on the geriatric situation comedy. The old women would be gorgons. Gianni would be a whistling tea kettle. But the script is like the eggplant Gianni prepares for his houseguests — lightly breaded then baked, as opposed to greasy and deep-fried. It’s rare to find this sort of realism applied to comedy. It shouldn’t be. They’re a perfect pair.

In Italian, with English subtitles

Unrated (nothing offensive, although not to be seen on an empty stomach)