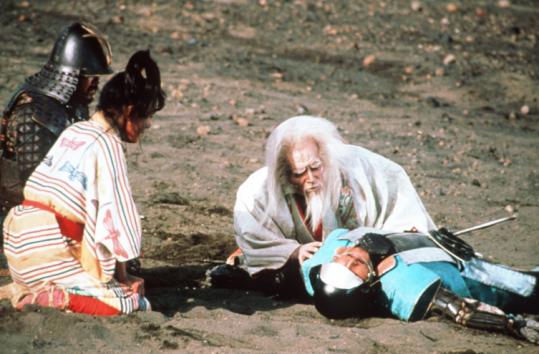 Expectations were very high when “Ran’’ was first released, 25 years ago. After one of the most astonishing decades in film history, Akira Kurosawa had spent much of the ’60s and all of the ’70s in the wilderness, attempting suicide and making only two movies. Then came “Kagemusha’’ (1980), produced under the aegis of Francis Ford Coppola and George Lucas. A period epic, it was seen as a dry run for Kurosawa’s long-planned adaptation of “King Lear.’’ Three decades earlier, Kurosawa had brilliantly reimagined “Macbeth,’’ in “Throne of Blood.’’ What could be more exciting than the prospect of one of the giants of world cinema, his career resuscitated, adapting Shakespeare’s most modern play?

Kurosawa sets his “Lear’’ in 16th-century Japan. Instead of daughters, Lord Hidetora (Tatsuya Nakadai) has sons. He divides his kingdom among them. Saburo (Daisuke Ryu), whom we see early on cutting saplings to shield his dozing father from the sun, urges against this plan. He is the Cordelia figure. The pop star Peter plays the counterpart to Shakespeare’s Fool. He seems pouty and a bit bored, the one disappointment in an otherwise-superb cast.

The standout is Mieko Harada, playing a Lady Macbeth figure, married to one son and the mistress of another. She combines ferocity with restraint, and the result is a stunning intensity. There are times you almost expect the screen to melt as Harada, nearly motionless, spits out her lines.

This reissue celebrates Kurosawa’s centenary as well as the 25th anniversary of “Ran.’’ So it’s also about “Seven Samurai’’ and “Ikiru,’’ “Rashomon,’’ and “Throne of Blood.’’ It says much about Kurosawa’s stature that while “Ran’’ is a great film, it is not one of the great Kurosawa films. A deep division underlies it. Kurosawa, the master of kineticism on the screen, had discovered painterliness in “Kagemusha.’’ He used color, and stillness, to often-ravishing effect there. In “Ran,’’ color plays a role not unlike that of language in “Lear’’: a kind of ground bass of beauty, a product of pure imagination, that both affirms life and surpasses it. Yet Kurosawa uses that beauty more as negation: a reminder not of what man is capable of but how puny he is in comparison. As against that glory in the display and arrangement of color, there is an unrelenting philosophical bleakness. “Man is born crying,’’ says the Fool. “When he’s cried enough he dies.’’

Part of what makes “Lear’’ feel so terrifyingly modern is its nihilism. Yet the rich, riotous abundance of Shakespeare’s language — ripeness really is all — provides a counterbalance to the terrible story of a father betrayed and death triumphant. The title of the play is a person’s name. The title of the film is the Japanese word for “chaos.’’ The difference is telling.

For Kurosawa, arranging armies on the screen like God playing at a board game, there is no consolation even in aesthetic order. If anything, it adds to his sense of remoteness. “Hell is ever at hand,’’ says the Fool, “which you can’t say of Heaven.’’ One can almost sense Kurosawa’s smirk. One more than senses it in the final image. In long shot, a blind man stands unaware at the edge of a cliff. If there is a more desolate image in film history, I hope never to see it.