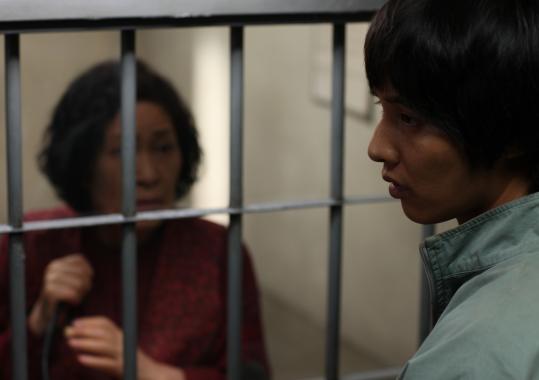 When he’s really cooking, the South Korean director Bong Joon-ho seems to reinvent movie storytelling itself. The word “Hitchcockian’’ keeps coming up in discussions of his latest sublime outrage, “Mother,’’ not because there are elements of violence, obsession, and wrong-man suspense in the movie — oh, there are, there are — but because Bong has us so completely in his grip. You never know where “Mother’’ is going to go next. All you know is that you’re in the hands of a master with an appreciably bent sense of humor.

Remember, this is the director who in “The Host’’ (2006) used the timeworn Godzilla genre as a vehicle for slaphappy social satire. Bong’s latest is, on the face of it, a melodrama with classic bones and a novel conceit: a loving mother (Kim Hye-ja) turns detective to free her imprisoned son (Bin Won) from a murder rap. Yet a playful, deadpan surrealism transforms each scene into a nail-biter in miniature, and Bong delights in showing how South Korea’s rigid social structure can’t help devolving into murder, madness, and all-around bad behavior.

It’s clear from the beginning that this mother, a neighborhood herbalist and unlicensed acupuncturist, takes maternal devotion too far and that the object of her affection, a 20-something son named Do-joon, is a barely functioning idiot. As is typical for Bong, that opening scene involves an extremely sharp paper cutter and a speeding Mercedes, your guess as to which will draw first blood.

With the help of his putative best friend, a strutting neighborhood bad boy named Jin-tae (Goo Jin), the son wreaks revenge on the owner of the Mercedes in a very funny donnybrook at a golf course. What’s shaping up as a comedy of errors, though, takes a dark turn when a local schoolgirl is found dead on a balcony in view of the entire town. The police immediately arrest Do-joon, who was seen drunk and grabby at a bar the night before.

The path by which the mother turns snoop is similarly roundabout. Poor thing, she’s not the sharpest needle in the acupuncture kit, but she’s unshakable when she gets a notion in her head. Convinced (for a while, anyway) that the friend did it, she sneaks into his house and is forced to hide in the closet when he returns home with a girlfriend. Old idea, but Bong gives it stylistic bounce and dread and something harder to pin down — a sense that the mother is sailing into an unknown world where she may as well make her own rules.

The plot keeps cranking forward, turning up daft surprises as it goes. “Mother’’ eventually involves recovered memory, cellphone hacking, police detectives who karate-chop apples from suspects’ mouths, and the proper insecticides to use in a suicide. All this is delivered in high cinematic style. Hong Kyung-Pyo’s camera swoops and dives, sometimes pulling back until the mother is a tiny figure in a vast landscape, at other times rushing in to register the many shades of consternation on an old lady’s face. “Mother’’ is smooth work — on a formal level, the Hitchcock comparisons aren’t far off — but Bong is going for a deeper disorientation.

He’s aided immeasurably by his leading lady. Kim, 68, is a longtime fixture of Korean TV dramas (in which she often plays mothers), and her unnamed character here has the dazed, determined look of the put-upon soap opera heroine she doubtless is in her own mind. The mother’s impassioned love for her son is a hint she hears music no one else does, and in a few eerie scenes, when things are going particularly wrong, she breaks into a demented private rumba. Kim neither ennobles this woman nor makes fun of her — an elegant balancing act.

Bong, meanwhile, does his level best to keep us off balance. He favors gorgeously constructed scenes that bristle with random elements. Why does the dead girl’s friend send the mother off to buy Kotex when she wants to get rid of her? Is it another reminder of the blood that has spilled and will continue to spill? Is it a coincidence that, for the most part, only women bleed in this movie?

If there’s a flaw in “Mother’’ it’s that you sense, far below the genre games and dada slapstick, an exhaustion, an anger, with Korean society that Bong will probably need to address more directly someday. For now, he’s an inspired craftsman with an appealingly fiendish sensibility — the more apt comparison may be to Polanski rather than Hitchcock — but he could be much more. He has a mother of a movie in him, and if we’re lucky, we’ll get to see it.

In Korean, with subtitles