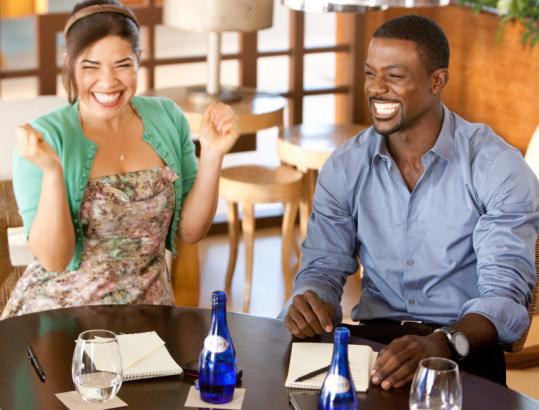 “Our Family Wedding’’ is another Hollywood fast-food sandwich. But instead of two squirts of ketchup someone actually took the time to lay some fresh tomato on that greasy bun. The movie tricks out the “Guess Who’s Coming to Dinner’’ formula for a hyperrracial, upper-middle class 21st-century Los Angeles. Lucia and Marcus (America Ferrera and Lance Gross) have come home from New York to tell their families they’re engaged. Will her folks freak out because he’s black? Will his father have a fit because she’s a Chicana? Honestly, who cares.

The movie doesn’t. The racial barriers are strictly procedural. Hours before they meet at a dinner, Lucia’s dad (Carlos Mencia) tows the illegally parked car of Marcus’s father (Forest Whitaker). They take umbrage via racial shorthand — “I’m not your bro’’ — and it’s not terribly sincere. At some point the men go for tuxedo fittings, and when Whitaker gets a load of Mencia’s spiffy alabaster number, he almost has a tantrum: How come he gets the white one?

Someone must have realized how absurd that seems — that whiteness for these very successful non-white people is still aspirational — because that’s pretty much the last we hear about it. “Our Family Wedding’’ is only lazily about race and is mercifully comfortable about class. The movie, as it’s been conceived, can’t exist without at least the possibility of interracial taboo.

But it’s funny and useful if only as a look into different kinds of love. Marcus and Lucia loosely survey their parents’ marriage and their parents’ friends’ relationships to determine who it is they want to be as a couple. Whitaker, playing a radio personality with a gorgeous hillside house, is single and promiscuous, resisting the no-longer-platonic love that’s pooling in Regina King’s big beautiful eyes.

Mencia has been married to Lucia’s mom (Diana-Maria Riva) for 25 years, although neither he nor Riva looks old enough to have been doing anything for that long. Their marriage is solid but careworn. She wants him to reroute toward her his passion for the cars he tows and restores. The director and co-writer Rick Famuyiwa does a convincing job of pushing him back into her arms.

The movie cleverly uses Babyface’s quiet-storm classic “Soon as I Get Home From Work’’ to make points about what devotion means. When Charlie Murphy, playing a louche friend of Whitaker’s, sings it to Taye Diggs, another Whitaker buddy, he means it as a putdown of conjugal commitment. When Marcus sings it to Lucia, it’s an unreasonably effective come on. When she sings it to him, it’s an apology.

The movie is made livelier by its bit players — King, Murphy, Lupe Ontiveros as Lucia’s bigoted grandma, Anna Maria Horseford as Marcus’s grandmother, Shannyn Sossamon as one of Whitaker’s airhead girlfriends, and, best of all, Anjelah Johnson as Lucia’s car-mechanic sister.

Most of these people have no problem upstaging Ferrera and Gross, who are enjoyable. But they’re like bystanders in their own lives. Most of this is the writing. The rest is on them. Now that the plug has been pulled on “Ugly Betty,’’ I’d like to see Ferrera distance herself from that character’s flickering self-confidence and go for something more grown-up. She’s best when she’s assertive.

Gross is a less natural actor. He is charismatic, good-looking, and sexy in a way that’s shocking lately for a man in a Hollywood movie. At some point, he gazes down at Ferrera, and, yes, there’s love in his eyes. There’s also real want in them, which a pitiful number of Gross’s peers lack in the presence of a woman.

I like the way this movie tries to escape the box it’s been crammed in both by the filmmakers and the studio marketing department. When its characters are actually connecting with each other, “Our Family Wedding’’ feels authentic. The trouble is that Famuyiwa wastes a lot of time with pratfalls and slapstick. No movie needs Forest Whitaker being humped by a Viagra-crazed goat. It also could survive without the obligatory family sporting-event sequence (softball, this time) and the broad stereotypes that drown the later scenes.

Famuyiwa doesn’t work much (his last movie was 2002’s buppie romantic comedy “Brown Sugar’’). But he has a knack for the way people relate to each other. The affection here is true and, where blacks and Hispanics in the movies are concerned, distressingly rare. It would be exciting to see him use that warmth and joy to help pull romantic comedy out Hollywood’s dumpster.