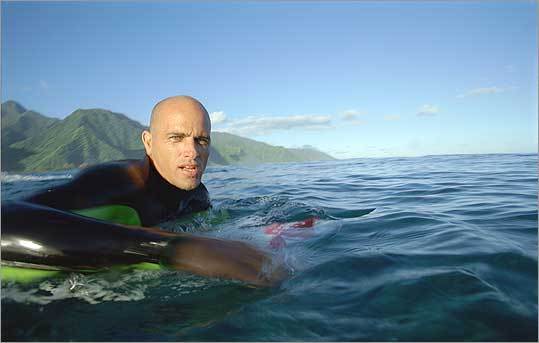 With or without surfboards, Tahiti’s a great subject for a travelogue, which is what “The Ultimate Wave Tahiti 3D’’ basically is. Most everyone recognizes the island’s name, yet who has a mental image of it other than one of generalized tropical beauty?

As it happens, Tahiti’s specific beauty is very spectacular indeed. It’s a good thing we’ve had such a mild winter. Otherwise the New England Aquarium might be asking for trouble showing “Ultimate Wave’’ right now.

The movie’s less interested in Tahiti, per se, than in its surf. Nine-time world champion Kelly Slater brings his board to the island, where he and the local maestro of shooting the curl, Raimana Van Bastolaer, talk about surfing and then head out to catch some waves. Accompanying them are a cute Tahitian kid and several bikini-clad fellow surfers.

Interspersed among surfing sequences and swooping aerial shots of the island are some surprisingly effective bits of computer-generated animation on how islands are formed and ocean waves get generated. (A set of underwater shots of waves breaking is a revelation.) Alas, there’s also a very lame piece of animation on local gods.

The filmmakers use 3-D to generally impressive effect. Schools of fish swim right at viewers. Water seems about to splash into laps. Who needs “Avatar’’? Tahiti may not be Pandora, but it’s even more beautiful and a whole lot more real. Also, as Randy Newman once sang (in rather a different context), “They got surfin’, too.’’