In French sequel, the proletariat fights back 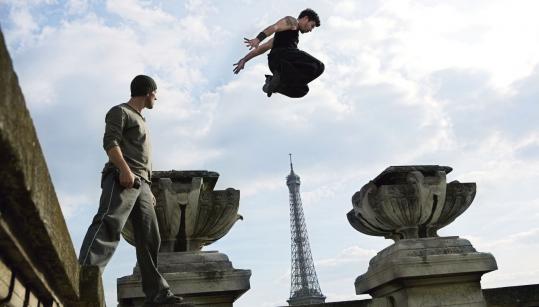 David Belle and Cyril Raffaelli are reunited in “District 13: Ultimatum’’ to save residents of a housing project from a government conspiracy. (Magnet Releasing)
By Wesley Morris Globe Staff / February 19, 2010

Banlieue 13 is the enormous housing project sullying the outskirts of Paris, and the place just can’t get a break. In 2004’s action-sleeper “District B13,’’ the scrappy multiracial residents, led by a high-kicking cop and a high-flying street artist, made an entertainingly dire discovery. The government planned to obliterate what it saw as an impoverished eyesore and criminal hotbed. But, dammit, those poor, agile, muscular, gun-toting thugs were people, too.

In “District 13: Ultimatum,’’ they still are - basically. And once again, their ghetto Shangri-La is under government siege. There’s no reason a conspiracy this outlandish should work twice. But it’s so hilariously within the realm of plausibility that it does.

We’re in 2016 now, and B13 now seems somehow more sprawling, vibrant, and in contempt of the police than it did a few years ago. It’s like a cross between that current Broadway musical “Fela!’’ and a penitentiary. While hip-hop beats pound the soundtrack, the camera flies around the property and ogles all the flamboyantly armed Africans, Arabs, Spaniards, and Aryans (in the Aryans’ case, their guns are their biceps).

Written by Luc Besson, the plot is almost as jacked-up as the physiques. After video of the Africans shooting up a police car is broadcast all over France, the government, under the evil influence of its secret service, proceeds with a plan to rid Paris of B13 once and for all. Fortunately, some scrupulous teens filmed what becomes recriminating counterfootage.

The head of the secret service (Daniel Duval) makes a crazy but seductive case for destruction (a contractor called “Harriburton’’ wants to rebuild for the bourgeoisie), and the president (Philippe Torreton), limp with dovishness, consents on the condition that all 1 million of B13’s inhabitants are humanely displaced. (Why he’s failed to ensure humane living conditions is one of the movie’s implicit critiques.)

And where is Damien Tomaso (Cyril Raffaelli), France’s top high-kicking cop? He’s been framed for heroin possession and locked up, clearing the way for the secret service to continue to work its dirty magic. In one of the movie’s many comical contortions, Damien is sprung after he puts a yoga move on two guards while he uses one guard’s phone to call his street artist pal, Leito (David Belle).

With the first movie’s stars reunited, “Ultimatum’’ spends its last half in a breakneck rush. But each man is pretty effective working on his own, too. Belle, a tattooed pretty boy whose hair has been gelled into a quill, has a fine sequence in which he’s chased from the 18th floor of one side of an apartment complex all the way down to the street level of another side. He launches himself across rooftops and slides down ladders, at some point in only a pair of sneakers and sweat pants. Unlike too many action movies, the editors don’t cut away from his aerialist skills.

Ditto for how they treat Raffaelli - although I’m sure Damien’s undercover gig as a chesty exotic dancer in a Paris drug den required a female body double.

The sequel lacks some of the sci-fi shock and spontaneous pow of its predecessor, which was directed by Pierre Morel, who went on to make “Taken’’ and this month’s “From Paris With Love,’’ both from Besson’s action factory. For “Ultimatum,’’ Patrick Alessandrin more or less follows Besson’s instruction manual.

And yet the movie works as a barbed-wire farce about how government exists to crush the poor. It’s true that the bickering warlords of B13 are obnoxious. But when they come together on behalf of their home and confront the president, their ultimatum makes sweet radical sense. This is the first action movie in which bombs serve a humanitarian end.

Wesley Morris can be reached at wmorris@globe.com. For more on movies, go to www.boston.com/movienation

Rated: R (some violence, language, drug material, and the sight of a male cop clad - barely - as a sexy lady dancer)