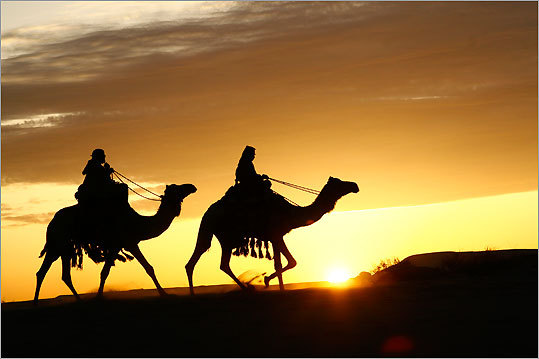 To say Americans have a misinformed view of Saudi Arabians is an understatement. As rabid individualists, we can’t fathom the apparently conformist dress. We see millions praying at the holy city of Mecca and blink uncomprehendingly. Many find the culture vaguely unsettling, if not threatening.

“After 9/11, many of my friends in America think we’re all extremists,’’ says Hamzah Jamjoom, a Saudi and co-narrator of “Arabia,’’ the latest dazzling travelogue documentary to hit the big, big screen. “We’re not. As my mother says, ‘We’re not perfect.’ ’’

Jamjoom, 24, is a film student at DePaul University in Chicago. The documentary’s premise is his return home to the coastal city of Jeddah and his quest, with film crew in tow, to see how his nation has changed and not changed. “We’re trying to balance tradition with progress,’’ he says, “because we need both.’’ Hence the obligatory if amusing scene of Jamjoom trying to ride a Bedouin camel.

Directed by IMAX veteran Greg MacGillivray (“The Living Sea,’’ “Everest,’’ “To Fly!’’), “Arabia’’ delivers the quintessential IMAX trip. Panoramic helicopter shots take us swooping over deserts, diving through Red Sea reefs, and hovering over cityscapes like Riyadh’s. The film also teaches, whirlwind-style, 2,000 years of Arabia’s history: from the ancient tombs of its lost Nabataean city of Madain Saleh, carved from sheer sandstone cliffs, to its golden ages, first brought on by the frankincense trade to the Roman Empire, and later exemplified by discoveries in optics, algebra, physics, and engineering that predated Europe’s Renaissance by centuries. Reenacted scenes, interspersed with the magisterial narration of Helen Mirren over digital effects of ancient maps, exploding volcanoes, and flipping pages, explain the rise and fall and rise again of the Arabian empire.

But largely, and thankfully, we are in the hands of the charming Jamjoom, whose softly accented English demystifies Saudi Arabians and Islam. We see him, meet his family, and through his guidance get a rare peek into a nation that remains largely behind closed doors to most Westerners.

And just when the movie nearly becomes a gauzy PR puff piece for the Saudi government, the affable Jamjoon tempers the hype with poignant commentary, like the admission that Muslims might have an image problem. Or that even after so-called modernization, women don’t have the same opportunities as men. They still can’t study or travel without permission from their husbands and fathers.

Despite the limitations of the IMAX genre - be under one hour, educational, and entertaining - “Arabia’’ strikes a fair balance between information and spectacle. The film closes with breathtaking aerial shots of the Hajj, as 3 million Muslim pilgrims descend on Mecca and circle the Ka’ba, the cube-shaped structure that was supposedly built by Abraham. It is here we are reminded that Muslims, Christians, and Jews share the same heritage - and perhaps a more cooperative future.

Ethan Gilsdorf, author of “Fantasy Freaks and Gaming Geeks: An Epic Quest for Reality Among Role Players, Online Gamers, and Other Dwellers of Imaginary Realms,’’ can be reached at ethan@ethangilsdorf.com.