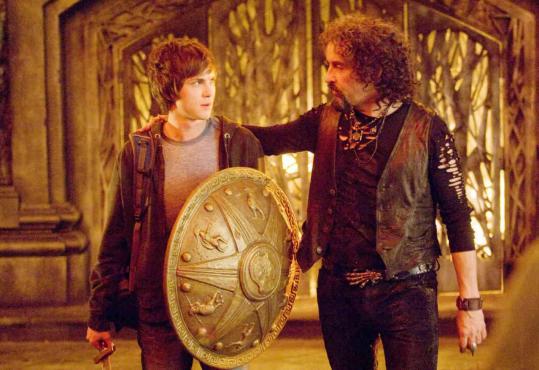 Percy Jackson & the Olympians sounds like an Otis Redding cover band. It is, instead, an unofficial cover of the Harry Potter franchise. “The Lightning Thief,’’ the first film in what its makers at 20th Century Fox almost certainly hope will become a series, features a New York teenager named Percy Jackson (Logan Lerman) who’s introduced to a world of magic, demons, and special effects. Very little of it is as persuasive or enveloping as its beloved English counterpart. But it works very hard to distract 11-year-olds from thinking about the November arrival of “The Deathly Hallows.’’

Percy discovers that the Greek gods have been walking among us and reproducing with humans for eons and that he is the demigod son of Poseidon (Kevin McKidd). Apparently, Poseidon’s brother Zeus (Sean Bean) has had his lightning bolt stolen, and if it isn’t returned Zeus will declare war with his other brother Hades (Steve Coogan) against all the gods. The assumption is that Percy took the bolt. But the boy doesn’t know where it is. Has anyone thought to check Harry Potter’s forehead?

It’s not long until Percy’s mother (Catherine Keener) has sent him to Camp Half-Blood, which is run by his mythology teacher, who sheds his wheelchair and turns into half-horse, half-Pierce Brosnan. Among other things, Percy has to collect a set of pearls and arrive at the gates of hell to rescue his mother, which he does accompanied by his two friends, Ron and Hermi - excuse me. They’re a satyr named Grover (Brandon T. Jackson) and Athena’s demigod daughter Annabeth (Alexandra Daddario), and as a trio, all they seem to do is slay beasts, which will please some young moviegoers to no end.

The film is based on Rick Riordan’s hit Percy Jackson books (the first appeared in 2005). Riordan was a schoolteacher whose career as a popular writer began as a mystery novelist. But you get the sense that he saw his students rabidly reading J.K. Rowling’s books and thought, I can do that. Not so much. Watching this movie, adapted by Craig Titley, your appreciation for the complexity and vastness of Rowling’s vision only grows. With all its cheesy effects and sylvan swordplay between kids in jeans, sheaths, and leather boots, “The Lightning Thief’’ feels like a cross between “Clash of the Titans’’ and a renaissance faire.

That Chris Columbus has been recruited to direct only compounds that ersatz “Potter’’ feeling. Columbus made the first pair of “Potter’’ movies -- the only two that could double as a couple of Ambien. His shameless jump to a rival team is a move only Brett Favre could appreciate.

The new movie’s modern settings suit Columbus better than the intricacies of Rowling’s crypto-medieval world. And yet there’s something woefully uninspired about the gang’s drive across the country, where they find replicas of ancient Greece in, say, Nashville. Too much of the movie feels like a cheap imitation. Lerman acquits himself nicely. But his sharp features, swept-over haircut, and propensity to preen and pose suggest a somehow more adolescent Zac Efron. And Daddario might be playing Athena’s little girl but that baby face and those topaz-blue eyes suggest her earth mother is Tiffany Amber Thiessen.

By the time the movie arrives in Vegas for a lotus flower-fueled narcotic interlude in a casino, it’s clear Columbus is phoning it in. He can’t bother to re-create the glee of the kids’ high. Even the bit of the cloven-foot dancing Grover does to Lady Gaga feels mandated by the Kidz Bop crowd. Until the hormones kicked in, my misgiving about the “Harry Potter’’ movies was that the characters didn’t seem adolescent enough. By the fourth movie, that started to change. In “The Lightning Thief’’ the kids are meant to talk like actual kids - “What’s crackin’?’’ and “I got this’’ - but modern parlance has the unforeseen effect of forcing a squareness onto the proceedings.

The movie has a few adult pleasures. As Persephone, Rosario Dawson is a woman who knows a ridiculous sexual metaphor when she touches one. And Uma Thurman pockets the movie, playing Medusa as if Marlene Dietrich thought she was Gloria Swanson. When Medusa tells Percy, “I used to date your daddy,’’ she adds an entirely new meaning to the Poseidon adventure.

Like the popular "Harry Potter" movies, the new film "Percy Jackson & The Olympians: The Lightning Thief" needs to appeal to more than just the kid in us.

Written by: Craig Titley, adapted from the book by Rick Riordan