Until the Light Takes Us 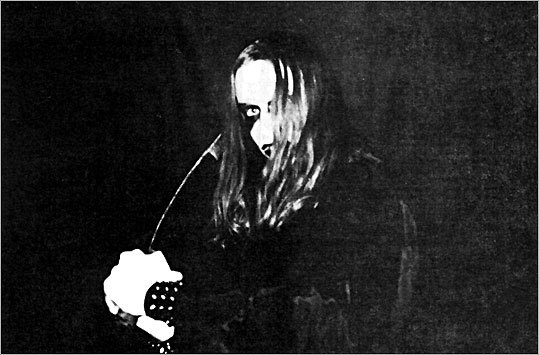 The story of Norwegian black metal, a grim and extreme subset of heavy metal that reared its head in the early ’90s, is fascinating subject matter. Part music scene and part violent uprising, its protagonists were young singers and guitarists whose darkness spilled off the stage and into real life: murders, suicides, and a rash of church burnings accompanied the assaultive sounds, all rooted in an ill-defined ideology that vilified Christianity and modern culture.

First-time documentarians Aaron Aites and Audrey Ewell spent several years in Norway making “Until the Light Takes Us,’’ which aims to reveal the truth behind the grisly headlines, and to dispel the widely circulated reports that the scene was overrun with Satanists. All well and good, but Aites and Ewell have taken a hands-off approach to their reporting, which leaves too many questions unanswered.

The pair spent a chunk of their time winning the trust of the scene’s players, who were initially skeptical about participating, and two of them are the film’s central figures. Gylve Nagell, a.k.a. Fenriz, a member of the band Darkthrone, is an odd choice: Aside from being vaguely bummed out that the black-metal sound and look was co-opted by the mainstream, he hasn’t much to say.

The far more compelling Varg Vikernes of the one-man band Burzum, who was in prison at the time serving 16 years for the murder of a onetime bandmate, is a self-styled prophet. He speaks at length about the loss of Nordic traditions and the scourge of American culture as we watch footage of ancient churches burning to the ground and images of the local 7-Elevens and McDonald’s polluting town squares. Vikernes feels misjudged, and the filmmakers want the truth to come out.

Instead, their dedication to giving the players their moment on the podium prevented Aites and Ewell from asking provocative questions, or, it would seem, any questions at all. More fans than filmmakers, they allow the misguided metal crusaders to explain themselves - a flawed tactic when your subjects are an inarticulate dullard and a smug misanthrope.

Neither does the film supply a personal or cultural context that might shed some light on how and why these young men’s ideological gripes translated into homophobia, self-mutilation, and ghoulish makeup, not to mention killing each other and themselves. Moreover, there’s little black-metal music in the film, although plenty of moody electronica serenades, dreary street scenes, and frigid landscapes.

Talking heads are overused in documentaries, but in this case a dose of perspective, a point of view or two, would have a gone a long way toward turning a pageant of unreliable voices and morbid images into a portrait of the artists and their deadly scene as something more than misunderstood.

Joan Anderman can be reached at anderman@globe.com

UNTIL THE LIGHT TAKES US Directed by: Aaron Aites and Audrey Ewell

Written by: Aites and Ewell