Sparks of familiarity in this tear-jerker 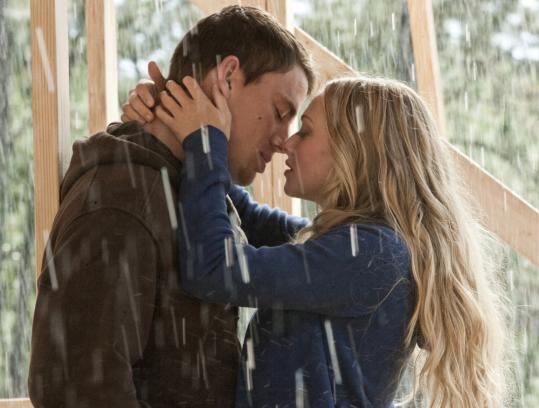 Everything most moviegoers need to know about “Dear John’’ can be summed up in the seven words “Based on the novel by Nicholas Sparks.

It’s surprisingly beside the point that the film is directed by Lasse Hallström, once the capable chaperone of “My Life as a Dog,’’ “What’s Eating Gilbert Grape,’’ “Chocolat,’’ and “The Cider House Rules.’’ Hallström’s veteran creative hand barely shows up at all in “Dear John.’’ In fact, there’s good reason to suspect that the movie was actually directed by the South Carolina Tourism Board; that would explain why all the focus is on luscious sunsets, shoreline frolics, stately plantations, and kisses in the shimmering rain. Many scenes are also enhanced by Channing Tatum’s copper-toned abs and pecs, which practically deserve their own casting credits.

Tatum, a former Abercrombie & Fitch model who clearly hasn’t let his gym membership lapse, plays John Tyree, a troublemaker turned soldier, still prone to impulsive and explosive behavior but open to being tamed. While on leave back home in spring 2001, John meets saintly, refined college cutie Savannah Curtis (Amanda Seyfried, best known for roles in “Mamma Mia!’’ and HBO’s “Big Love’’). There’s predictable attraction in the clash of opposites: he Tarzan, she Jane. If only screenwriter Jamie Linden (“We Are Marshall’’) could write dialogue half as good as that.

Savannah’s friends (including Henry Thomas as a protective neighbor) have mixed reactions to the budding romance. Eventually, John brings her home to meet his reclusive father (Richard Jenkins, mesmerizing as usual), who takes to her immediately despite a developmental disorder that keeps him from embracing much beyond his handily metaphorical rare coin collection. When the young lovers part as planned - she heads back to classes; he returns to his unit overseas - they agree to write each other faithfully until John’s tour of duty is up in a year.

As anyone familiar with Sparks’s best-selling novels knows, this is the point at which everything must fall apart. It does, in the wake of the 9/11 terrorist attacks, when John reenlists and Savannah seemingly runs out of patience before his military service is done.

Her “Dear John’’ letter is cryptic: She’s moving on and marrying someone else. His response is to burn her letters and sign on for more and more dangerous missions, even after he’s seriously wounded.

It’s not until years later, when he returns home for a funeral, that there is closure. Details won’t be revealed here; what little surprise this calculated tear-jerker has should be preserved. But if you’ve seen any other big-screen adaptations of Sparks’s novels - “Message in a Bottle,’’ “A Walk to Remember,’’ “The Notebook,’’ “Nights in Rodanthe’’ - you won’t be too shocked by the road “Dear John’’ travels, or where it winds up.

Unfortunately for Tatum and Seyfried, Ryan Gosling and Rachel McAdams did a far more convincing version of this same basic dance in “The Notebook.’’ But that won’t stop Sparks, or Hollywood, from remaking it several more times.

Written by: Jamie Linden, based on the novel by Nicholas Sparks

Rated: PG-13 (some sensuality and violence)