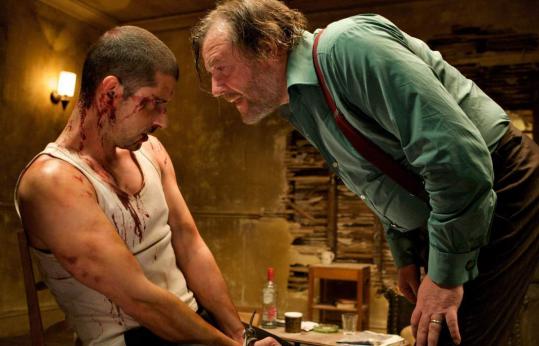 Hurt is merely the eldest of the lot, playing a codger named Peanut. He scrunches his faces and snarls all his lines. The object of his obscenities is the Frenchman (Melvil Poupaud) he and his buddies - played by Tom Wilkinson, Stephen Dillane, and Ian McShane - have dragged from a restaurant, tossed into a van, and locked in a wardrobe. As it turns out, this is an act of revenge they’ve carried out on behalf of their grieving gangster friend Colin (Ray Winstone).

Colin’s wife (Joanne Whalley) has recently informed him that she’s taken a lover - that would be the man tied to the chair with the bag on his head. Peanut and the gang want to see their hostage killed. But action is really an afterthought. The film amounts to a verbal disquisition on the shortcomings of maleness that suggests pop-psychology Quentin Tarantino.

The men take turns spinning anecdotes or narrating their state of mind. They do so standing in a hallway and around a sparsely furnished room. Some of their talking leads to flashbacks. Some happens as conversations taking place inside Colin’s head. Is he to blame for the rupture in his marriage? Was he ever virile enough for his wife? Are lusty women inherently deceitful? Are you tired of artists who continue to beat this dead horse?

The ancient Greeks, David Rabe , David Mamet, and “The Sopranos ’’ have all been here. Their complaint is timeless: Women make us crazy. But there’s a way to dramatize the assertion without erring on the side of misogyny. By the time Whalley is licking window panes in Colin’s fantasies and being smacked around in flashbacks, you worry that the filmmakers are, indeed, erring.

Screenwriters Louis Mellis and David Scinto also wrote 2000’s “Sexy Beast,’’ a more imaginative laceration of a tough guy’s psyche that also starred Winstone. Mellis and Scinto are trying to think past who women are to get at the essential flaws of men. Nice try. The movie, which Malcolm Venville directed, can’t help presenting the root of all man’s troubles as a lingerie-clad seductress.

Even so, the monologues are slyly performed. There’s fun, for instance, in watching McShane, as the homosexual of the group, deliver all his lines as if he’s having a massage. And Wilkinson, as the gang’s homeliest member, taps into a wonderful sort of averageness.

Hurt’s part as the keeper of the macho flame is silly, but he’s commanding even when handling the obvious symbolic business, like explaining the plot of Cecil B. DeMille’s “Samson and Delilah.’’ Winstone, though, remains a weepy and moping mess, throughout. Manliness, it seems, is unsalvageable. The movie is, too. Before our eyes, “Reservoir Dogs’’ becomes “Steel Magnolias.’’