From Paris with Love

Gun-toting Travolta falls hard, for himself 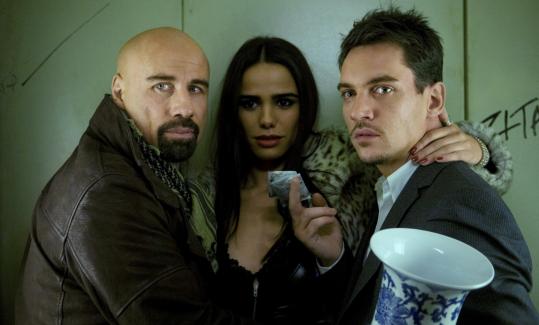 John Travolta adores being John Travolta. He adores himself to smithereens. As if we needed any reminder of this, there’s “From Paris With Love,’’ a collection of explosions and shoot-outs duct-taped to a terrorism plot. This is the sort of asinine action exercise that needs a star to blow up cars and leap from rooftop to rooftop with gusto. So right about the time that Travolta curses out the Charles De Gaulle customs staff, we know this movie has found a reason to be.

It’s not simply that Travolta speaks. In fact, playing a government agent named Charlie Wax, he doesn’t give his most convincing line readings. It’s as if he’d only seen the script minutes before the director Pierre Morel said, “Action.’’ But every time he opens his mouth, he sounds elated. He looks it, too. Travolta struts around the movie with a bald head, dyed goatee, gray metal hoop in his ear, elaborate scarf, and many extra pounds. He looks like the illegitimate child of Freddie Mercury and Charles Barkley. Given how much sing-songy smack Travolta talks, he appears to know it.

Charlie has come to Paris to - well, I’m not entirely sure, since the scope of his mission seems to expand every 20 minutes. The Chinese drug cartel he and his buttoned-up counterpart, an agent named James Reece (Jonathan Rhys Meyers) masquerading as a diplomat’s attaché, are supposed to bring down turns into a larger matter of international security. The situation lands right at Reese’s front feet, with a twist that feels borrowed from the John le Carré lending library.

Morel’s directing career began with such outlandish promise. His 2004 chase-picture, “District B13,’’ introduced American moviegoers to French parkour, then set the whole movie on fire with a damning xenophobic conspiracy theory. Last year’s sleeper hit “Taken’’ had none of that sense of insurgency. Luc Besson wrote and, or produced all three of Morel’s movies, and these most recent two just appear to have rolled off Besson’s action-comedy assembly line.

Working from a story by Besson, the screenwriter Adi Hasak splits the difference between intrigue and inanity. The climax involves a bomb, a kind of djellaba garment, and a speech about love. You have to see it to believe it, and I’m not saying you should. But if you happen to go and then find yourself debating whether to stay, you might want to stick around for the film’s crowning political absurdity, which is that speech and the character to whom it’s delivered.

Or course, should you go, it’s almost certain that you’ll put up with this movie because Travolta has. He knows his way around junk. This is a man who spent the last 30 minutes of “Staying Alive’’ dancing in only a loincloth and 10 gallons of baby oil. Nothing embarrasses him. So here’s Johnny, dropping suicide-bomber packs out of windows onto unsuspecting terrorists. And there he is - or his stunt double - pulverizing a gang of Frasian street toughs with his palms and forearms. At some point, he even takes a bite from the mythical “royale with cheese’’ that Vincent Vega went on about in “Pulp Fiction,’’ and it doesn’t feel entirely desperate. Charlie Wax is Vincent’s afterlife.

By the time he’s hanging out of the passenger side of a speeding Audi with a deluxe bazooka on his shoulder, talking on a cell phone, Travolta has reached a cruising altitude of cool ridiculousness. It’s no loincloth dance spectacular. But what is?

FROM PARIS WITH LOVE Directed by: Pierre Morel