At 80, Plummer has arrived at his ‘Station’ 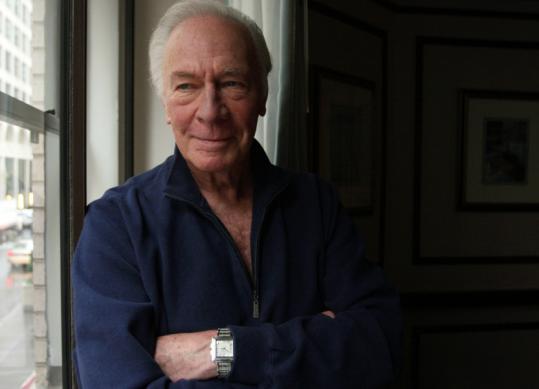 Christopher Plummer, who stars as Leo Tolstoy in “The Last Station’’: “The roles are getting richer and more interesting as I grow older.’’ (Tina Fineberg for The Boston Globe)
By Judy Abel Globe Correspondent / January 31, 2010

NEW YORK - “I’m on antibiotics,’’ Christopher Plummer says, stretching his long legs and settling into an easy chair in his hotel suite. “Otherwise, I would have a drink in my hand right now.’’

In truth, the 80-year-old actor famously gave up hard drinking and afternoon stupors 40 years ago, at the insistence of Elaine Taylor, his third, and current wife. So, chances are, even if he were free of all viruses, he wouldn’t be drinking anything stronger than coffee.

“Yes,’’ he acknowledges a little wistfully. “But I miss it like mad. I miss the whole idea of it.’’

Plummer stars as the Russian writer Leo Tolstoy in Michael Hoffman’s “The Last Station,’’ which opens Friday. The film takes place at the end of Tolstoy’s life when he renounces his noble title, family, and property in the name of a populist, quasi-religious philosophy.

This infuriates his wife, played by Helen Mirren, particularly when she finds out his followers are trying to convince him to leave the rights to his novels to the Russian people, rather than to his family.

“I loved the script because I thought it made Tolstoy - who I always thought was rather dry - seem full of humanity and humor,’’ Plummer says.

The actor is no stranger to humanity or humor, both of which played an integral part of his liquor-fueled past, when womanizing and male-bonding with the likes of Jason Robards were the norm.

He reverently reels off a decade-by-decade account of society’s relationship with alcohol, explaining that things are more fun when people are drinking.

“Drinking was particularly fun and fashionable in the ’50s. Drugs started to creep in and do their rather remote work in the late ’60s and ’70s,’’ he explains. “And then in the ’80s and ’90s everyone started to get terribly serious - drinking water all the time - or taking drugs. Poor old booze took a back seat.

“I’m glad to see it’s coming back these days, particularly in the young - at least they’ve got good taste,’’ Plummer says, approvingly. “Because I could never connect with my friends who were on drugs. They were in a totally gaga world, but at least booze - you could be violent, you could be funny, you could tell stories. It was a much more gregarious form of anathematizement.’’

These days Plummer’s too busy to drift around in a boozy haze, even if he were inclined to do so. In addition to “The Last Station,’’ he plays the title character in Terry Gilliam’s “The Imaginarium of Doctor Parnassus,’’ now in theaters.

“I love what I’m doing on the screen, particularly now, “ he says. “The roles are getting richer and more interesting as I grow older - I’m very lucky.

“Or maybe there’s nobody left, at my age,’’ he adds, laughing. “I have no competition anymore because I am the oldest man on earth.’’

Certainly Plummer has been acting longer than almost anyone else in the business. He started his career at 18 doing theater in Montreal, where he grew up. He became a fixture on New York and London stages in the 1950s, and also starred in live TV productions during that era.

Plummer moved into film and, in 1965, became known to every parent and child in America when he played the austere and demanding Captain Georg von Trapp in “The Sound of Music.’’ The actor says he disliked almost every aspect of it, except working with Julie Andrews, who played his family’s musical governess.

In the interview he refers to the film as “that movie,’’ seemingly unwilling to mention its title. But over the years he’s found alternatives. In his spicy autobiography, “In Spite of Myself,’’ published in 2008, he refers to it as “S&M.’’ At other points, he’s called it “The Sound of Mucus.’’ What’s more, he’s completely unapologetic about his contempt.

“I was a bit bored with the character,’’ he says. “Although we worked hard enough to make him interesting, it was a bit like flogging a dead horse. And the subject matter is not mine. I mean it can’t appeal to every person in the world. It’s not my cup of tea.’’

Ironically, Plummer’s performance as von Trapp helped land him the role of Tolstoy in “The Last Station.’’

“I can’t think of anybody else who would have interested me at all for the role,’’ says Hoffman, the film’s writer-director. “I was intrigued by the idea of casting someone who was close to Tolstoy’s age. Even though I’d never met Chris, I have admired him ever since - I’m loath to say it because I know how he feels about it - ‘The Sound of Music.’ ’’

Hoffman, who grew up in a small town in Idaho, says his family drove quite a distance to Boise to see the film when he was about 6 years old.

“It was the first time I ever had the experience of crying because I was happy - I never knew you could do that,’’ Hoffman says. “When he led them over the Alps to safety, I started weeping out of joy.’’

Hoffman says he almost wept again when he saw the chemistry between Plummer and Mirren in “The Last Station.’’

“One of the great gifts we received from Chris and Helen is that I found it so convincing that these people had been married for more than 40 years,’’ Hoffman says. “I saw it from the moment they walked on the set - you can’t direct that.’’

Plummer agrees. “I had a hugely satisfying relationship with Helen,’’ he says, adding that he’d wanted to work with her for a long time. “It’s because of the fine artist that she is. The finer they are, the easier they are to work with.’’

For his part, Plummer says he’s worked well with almost all his costars because he would refuse to work with anyone he considered weak. Twenty- and 30-something actors interested in sharing the screen with Plummer should take note because, as a rule, Plummer is not impressed with the crop.

“They are a problematic bunch,’’ he says, refusing to name names. “There’s the odd one who comes to the front, but for the most part, it’s all about being boys. That was never the case - Clark Gable, Jimmy Stewart and Cary Grant, even in their youth, they were men and they were hot box office stars.

“These young actors are not trained enough,’’ he continues. “They jump into television and want to be stars without doing any work. And they do become stars, but will it last?’’