In the second half at Sundance, hoping for that next big thing 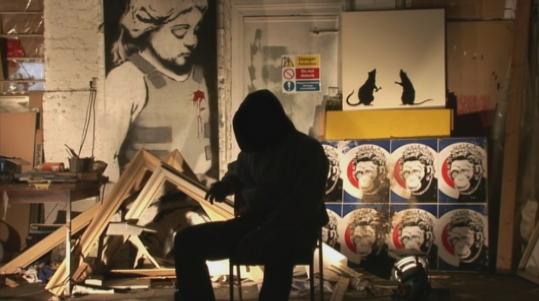 A scene from ??Exit Through the Gift Shop,?? one of the acclaimed films at this year?s festival.
By Ty Burr Globe Staff / January 30, 2010

PARK CITY, Utah - There’s something unreal about arriving midway through a film festival that has steadfastly refused to take off. Everyone seems to be walking around Sundance 2010 holding a party popper that won’t pop; the impatient are growing desperate and the philosophical are shrugging their shoulders and going to the documentaries, which are terrific as always.

On the other hand, the lowering of expectations - matched by a lowering of skies and a slow, constantly weeping snowfall - has resulted in late-festival sprouts of buzz poking through the freeze like spring shoots. Have you seen “Catfish?’’ people ask, as if reaching for a sunlamp. Is it true the Banksy film is that good?

Yes, it’s a transitional year, with new festival director John Cooper taking over for the long-serving Geoff Gilmore. Yes, Sundance has announced that it’s going back to its indie roots again. Yes, the economy and the specialty film distribution business are in the dumper, even if the Ryan Reynolds-in-a-coffin movie “Buried’’ sold to Lionsgate. Miramax died this week, and in Park City - the town the film company arguably put on the map - there wasn’t a sound.

But things weren’t all that different last year and we got “Precious.’’ This year the buzz keeps landing on individual films and flying off again. Case in point: “Animal Kingdom,’’ a brooding all-in-the-family crime drama from Australia that won a few online raves after its first screening and left audiences scratching their heads after the second. Writer David Michôd has a strong premise - an orphaned high schooler (James Frecheville, suggesting an Aussie Channing Tatum) comes home to a nest of bank-robbing uncles and a loving psycho grandma (Jacki Weaver, giving the film’s best performance) - but he directs his own script with a portentousness that slowly but surely saps the momentum. Bursts of shocking violence can’t keep this from playing like the old Sean Penn film “At Close Range’’ at 16 rpm. The lesson: Beware the genre filmmaker who doesn’t trust pulp.

But, yes, the Banksy film is that good, even if everyone here calls it “the Banksy film’’ because the actual title, “Exit Through the Gift Shop,’’ seems weirdly hard to remember. It’s a conceptual Chinese box that works: A doc about a filmmaker that’s directed by the subject that filmmaker was too hapless to actually make a movie about. Still with me? Translated: Banksy, the mysterious/anonymous British street artist (or graffiti punk, depending on where you sit) got so fed up with an eccentric Frenchman named Thierry Guetta following him around with a video camera for years that he (Banksy) decided to make a movie about him (Thierry) instead. As a kick, he told Guetta to go be an artist.

What unfolds is a sharp and extremely funny comedy about art, hype, talent, and the lack thereof, and if you hate everything these artists represent - if you’re one of those people who cheered when Shepard Fairey (who’s interviewed here) was arrested at his Boston opening last year - you just might want to see “Gift Shop,’’ because everyone involved ends up on the wrong end of the exploding cigar except the blissfully clueless Guetta. The mortified look on Fairey’s face as he contemplates the monster he has helped create is especially priceless.

Where the documentaries exude a muscular confidence, the dramas at Sundance seem hobbled by tired indie thinking. As always, there are new filmmakers here, some ready for the spotlight, others less so. Last year, the British artist Sam Taylor-Wood won an award for her effervescent post-punk short “Love You More’’; this year she returned with one of the festival’s most awaited features, “Nowhere Boy,’’ about the adolescence of one John Winston Lennon. (She also showed up with her 19-year- old leading man, Aaron Johnson, and carrying their unborn child, but of course Sundance is above such gossipy scandal. Buzz buzz buzz.)

The movie is a well-turned disappointment in the mini-genre of Young Lennon movies (1994’s “Backbeat’’ is still the champ), with Wood’s inability to sustain a consistent dramatic tone over the course of a feature resulting in a melodrama that’s increasingly shrill when it’s not turning mawkish. Johnson, who doesn’t look a thing like John, nevertheless conveys a wild energy that tumbles out in jokes and cruel putdowns, and the best scenes of “Nowhere Boy’’ show where that came from: his estranged, manic-depressive mother, played with disturbingly flirty intensity by Anne-Marie Duff. (Kristin Scott Thomas plays John’s dour Aunt Mimi; someone give this actress a farce, stat.) The movie will fool some, but it’s awfully close to Beatles kitsch.

Yet some tyro filmmakers, as always, proved competent and more. Galt Niederhoffer has produced many films (including those directed by her husband, James Strouse of “Grace Is Gone’’) but she has never directed a major feature, and her choice of genre - the dysfunctional-wedding comedy drama - seems tapped out after “Rachel Getting Married’’ and “Margot at the Wedding.’’ “The Romantics,’’ though, turns out to be a nice little surprise: a fully felt, expertly played roundelay about seven friends a decade after college crawling through a drunken night before two of them wed. (Just not the two that should be together.)

The actors are all terribly attractive and the dialogue polished to a sub-“Metropolitan’’ sheen - it’d be easy to mock the movie except that Niederhoffer knows her characters so well (she should; she’s adapting her own novel) and trusts them to carry their own stories. “The Romantics’’ also may be the first movie in which Katie Holmes arrives as a grown-up actress, having finally shed the tentativeness that always struck some of us as something between an affectation and a tic. Playing the intellectual of the group who’s nursing a broken heart for the groom, Holmes for the first time seems careworn by life’s experiences, and she keeps the character’s emotions pulsing just under the skin. It’s a heartbreaking piece of acting, and I say that as someone who has never taken this actress seriously before.

If nothing else, this may be the Sundance of women filmmakers, with both Nicole Holofcener’s “Please Give’’ and Lisa Cholodenko’s “The Kids Are All Right’’ marking well-received returns to form. With only a few days left in the festival, though, the potential of movies unseen is what keeps everyone in Park City piling onto the shuttle buses, hoping for the One that turns out to be worth it. “Catfish,’’ a documentary about a New York photographer’s growing online involvement with a pair of sisters in Michigan, may in fact be that one - I haven’t heard a single bad word about the film - but some of us won’t know until the next screening, and that hope is what gets us through the day.

What does it say, though, that more of the films and more of this festival seem to be creeping onto the Internet? Another talked-about doc, “Life 2.0,’’ is about the online community known as Second Life, and for the first time you can rent a number of Sundance offerings on YouTube or via On Demand. What happens next year if they give a festival and everyone stays home to watch it on their computers?

Ty burr can be reached at tburr@globe.com